The myth of morally neutral statistics

Unthinkable: The way we collect data and present it is tied up with our values 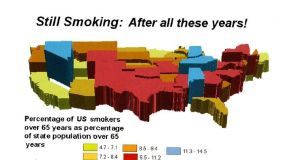 Part of an illustration by Prof Tom Koch mapping the presence of long-lived smokers across the US to give the impression of a correlation between long-life and tobacco use. Illustration: Tom Koch

Well-meaning academics have for years been advocating “evidence-based policy making”. Too many political decisions, they say, are based on ideological grounds. Instead, we should simply look at the data and do “what works”.

It sounds great in theory – who could be against evidence? – but in practice things are complicated.

In a new book, Ethics in Everyday Places (MIT Press), geographer Tom Koch reminds us that the presentation of statistics is not morally neutral. Exploring the use of maps in public policy, he shows how statistical graphics can be used to mislead, deflect or obfuscate.

One example is a map he created called “still smoking: after all these years!” in which he uses official health data to map the presence of long-lived smokers.

The map, which might well have been commissioned by the tobacco industry from a needy statistical firm, shows that smokers comprise a significant minority of over-65s in the United States.

“Evidentially, the map says, long life and tobacco-use are correlated.” (Of course, he explains, “longevity may occur in spite of long-term tobacco use, but never because of it.”)

Koch, a Canadian academic and prolific author, believes we all need to become more adept at interpreting maps. He also wants to send a message to professionals working in statistical analysis – pollsters, researchers and journalists included. Look at who is paying the bill, he counsels, and consider how that is influencing your judgement.

“Blinkered agnosticism is the very definition of what we mean today by ‘professional’,” he says. “And so we reject queasy moral concerns as unprofessional and substantive ethical concerns as irrelevancies divorced from the ‘real work’, the work we are paid to do.”

To reduce the risk of this “moral distress”, he says “we need to see ourselves as if we are the subjects of the maps we make, the statistics we collect”.

In your book, you illustrate that the kind of maps we design reflect what concerns us ethically. What maps are we failing to design and scrutinise?

Tom Koch: “It isn’t that we are failing to diagnose or design this or that map. Rather, it is a broader failing. We like to think maps are about the real world and that whatever they present is there, just like that, in the world.

“What map-readers and users forget is that each map is made by someone else, and made for a purpose. All maps reflect the ideas and prejudices of their creators. All maps exclude data in their attempt to forcefully present this or that idea about the world.”

“Of course not. Maps are based on numbers and the way we handle those numbers is called statistics. Even without maps, numbers are chosen to address a question. There is nothing neutral about the questions we ask or the way we frame them.

“So, to take a simple example: it is correct to say that we are as a people living longer. But it’s also true to say that longevity is far more prevalent among the rich than the poor. So a map of longevity by income will be very different from one that speaks to poverty’s effect. To ignore the latter is to ignore the poor which, I would submit, is anything but morally neutral.”

“Those advocating ‘evidence-based policy making’ do so on the implicit assumption that the evidence they advance is unbiased, neutral. They assume it is complete in the sense it tells the whole tale. In practice, that’s rarely the case.

“So in evidence-based analysis the first thing to ask is: What was the goal of the research, of the evidence being gathered? What was the question being asked? And then: What was left out and what question gives a different perspective?”

As a researcher, is it possible to be ethical and well-paid?

“Yes. But there is, for me, a special obligation for the well-placed and the well-paid to speak out when the current wisdom obviously contradicts experience; when data is clearly left to the side for a limited point-of-view. It means we need, as practitioners – geographers, librarians, journalists, statisticians, etc – to take seriously our responsibilities and to stand up when we believe things are not right, are misleading or just falsely argued.

“Finally, a word: this isn’t just about practitioners in this or that trade or science. It’s about all of us, how we as map readers and users can think clearly and critically. It’s about how we as citizens can argue for different points of view and, knowing the degree to which other work advances this or that idea, how we can make our own maps – or gather or own numbers – to advance alternative perspectives.”