The Morgan formula: how to put famous lives on film

Screenwriter Peter Morgan developed a neat way of portraying personalities, from Tony Blair and David Frost to the queen: focus on one incident. Now everyone’s at it 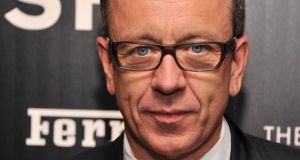 Peter Morgan: ‘Stephen Frears once said that the most interesting years of a career are between 40 and 60. So, I am halfway through. I find that encouraging’ 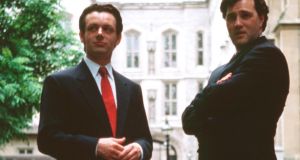 Michael Sheen and David Morrissey in The Deal 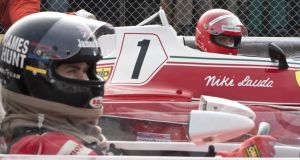 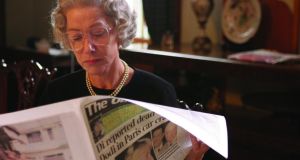 Helen Mirren in The Queen 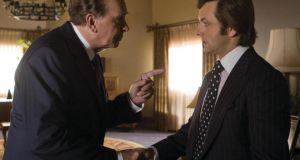 It’s not that the man doesn’t deserve it. Over the past decade, he has earned his reputation as a screenwriter of the most distinguished order. Since attracting attention with his script for Stephen Frears’s The Deal – the story of Gordon Brown’s tense relationship with Tony Blair – he has further burnished his standing with such contemporary classics as The Queen , Frost/Nixon and The Damned United .

But, like this journalist, he’s a mere 50 years old: far too young for an award acknowledging career achievement. (He will also be hosting a screenwriting seminar this afternoon at the festival.)

“I will behave appropriately and die three days later,” he chortles.

Now he is being so elevated, can he identify which projects he sees as signature works? “I think I stumbled upon a voice people associate with me with The Deal ,” he says. “I wrote that in 2002. Although I’d been writing for 10 or 15 years, I have only been writing in that voice for about 10 years. Stephen Frears once said that the most interesting years of a career are between 40 and 60. So, I am halfway through. I find that encouraging.”

He touches on an interesting point. In scripts such as The Deal (structured around a famous dinner in Islington), Frost/Nixon (the interviews between David Frost and Richard Nixon), The Damned United (Brian Clough briefly manages Leeds) and The Queen (Queen Elizabeth copes with Princess Diana’s death), he developed a hugely influential formula for addressing a personality: focus on one incident, rather than seek to summarise the entire life. Now everyone’s doing it.

“There has been a lot of that cropping up,” he says. “But that’s not entirely true. The Deal did stretch from 1983 to 1994. The Frost/Nixon story spanned six years. The Queen was closer to that. But it often appears there’s a pivotal event. I know what you mean. If I was doing my own life I would do the story of writing The Deal . That’s when it struck me you could write politicians as fully rounded, emotional beings.”


Uncertain about Rush
He has had the odd kickback from characters represented in his films. John Giles wasn’t happy to be shown as a conspirator in The Damned United . David Frost initially flinched at his portrayal in Frost/Nixon , but eventually came around. Morgan is, however, relaxed about most of the gentle liberties he has taken with the facts. He will, nonetheless, admit to a slight uncertainty about aspects of his script for Ron Howard’s recent Rush , the story of a famous rivalry between Formula 1 drivers James Hunt and Niki Lauda.

“Everything that happens in Rush is accurate,” he says. “The only thing I did overemphasise was their rivalry. Underpinning that there was always a friendship. Having said that, I don’t think Niki Lauda is capable of friendship in the way you or I understand it. He is an intensely lonely, natural assassin. His idea of friendship is rivalry.”

Peter Morgan has an interesting background. His mother was Polish. His dad, a German Jew, originally named Morgenthau, fled the Nazis to settle in England. In an irony that hardly needs unpacking, Peter remembers being bullied at school for being German. The war still dominated playground discourse in the UK during the 1970s.

“I suffered a little,” he says. “I was teased because of my German background. I was called ‘Fritz’ at school. We were steeped in the war at that time.”

He attended a posh Catholic boarding school in Somerset and then took a degree in art at the University of Leeds. Before it all came together at the beginning of the century, he made do by working on training films and corporate videos. His TV series The Jury turned a few heads. The Deal followed shortly afterwards. And then, in 2006 – the Jessica Chastain of his day – he seemed to be associated with everything worth seeing.

“There is a point when everybody spots who you are,” he says. “That was the year of The Queen , Last King of Scotland and Longford . They all happened to come out at the same time. It felt like I was everywhere. I was lucky in that more attention was given than would have been the case if the three had come out separately.”


Married to a princess
One aspect of his personal life has to be addressed. I read that Morgan is married to Princess Anna Carolina of Schwarzenberg. “I’m afraid the moment she walked down the aisle with me she became a peasant,” he explains. “If I were a woman and I’d married her brother, it would have been different. That’s how it works in those royal circles. She has lost everything. She’s now Mrs Morgan, a happy peasant.”

Now, Morgan moves on to a film on the life of Freddie Mercury and, for Ang Lee, a study of the relationship between Joe Frazier and Muhammad Ali. Well, that last film sounds as if it’s in his comfort zone.

“Oh, if it hadn’t been Ang Lee I might have said no,” he laughs. “It is set in the same year as Frost/Nixon , The Damned United and Rush . And it’s about the rivalry between two men. We’ve really got to move on.”


Peter Morgan will attend a public interview after a screening of Frost/Nixon in Cineworld tonight at 6.15 pm