The balloon - or rather, the moon - goes up as Galway’s arts festival starts 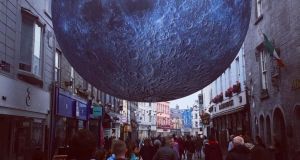 The Museum of the Moon installation near Lynch’s Castle on Shop Street, Galway.

The run of otherworldy Irish summer weather broke just in time for the start of the Galway International Arts Festival opening, allowing for a soft-day (and a return to service as normal from Galway weather). This year’s festival, with more shows than in previous years and an impressive line-up, opens officially on Monday evening but has already had a manner of soft opening, with the festival’s visual art shows being unveiled on Sunday afternoon and the Druid show, Shelter, opening that night.

Pragmatism surely had a role in an earlier time for the Festival Gallery event (ending comfortably before the World Cup and the Galway vs Kerry kick-off), at the centre of which is a large-scale, hefty explosion of an installation. That concept of explosion or earthquake isn’t far from the impact of Rock ‘n’ Roll, Turner Prize-nominated David Mach’s commission for GIAF, with a disruption of car and boat and caravan gushing out of (or being sucked into) a large break in the earth. They are riding waves formed by tens of thousands of newspapers, which also burst out of windows and gaps. An explosion sitting on the bearer of today’s explosive news. It’s a startling and disturbing sight, and skilfully assembled.

The setting for Mach’s work, involving as it does thousands of copies of Galway’s Connacht Tribune, is apposite, because its home in the spacious white exhibition space in the centre of the city is the former printworks of the Tribune next door. Its gracious dimensions have been a temporary visual arts space for the arts festival for a number of years.

The city has made a name for itself culturally is bereft of visual arts space and crying out for a municipal gallery. At the opening of the Festival Gallery on Sunday there was concern its run as an occasional cultural space may soon come to an end. It has been acquired, along with the carpark next door, by developer Michael Maye, and there is speculation it may ultimately become a food hall or car park. That prospect, along with the impending Galway 2020 capital of culture, should spur some action on the gallery front.

Among those ambling into the Festival Gallery out of the slight drizzle were artist Hughie O’Donoghue and his wife Clare, no strangers to the festival, which has featured his large-scale paintings prominently in the festival in the past. Sarah Hickson’s Sounds Unseen photographs capture the Calais Sessions at the refugee camps, and you can almost hear the music (and touch the mud).

Jennifer Cunningham’s After The Future paintings touch a nerve for Galwegians: her paintings evoke decrepitude in places of pleasure such as circuses and fairgrounds. Among them are Leisureland in Salthill and the nearby Seapoint amusements. GIAF artistic director Paul Fahy’s parents met at that art deco building when Seapoint was a ballroom, he told guests at the opening. He also invoked the history of the festival transforming unused spaces for events. It started with the first festival 41 years ago in a shop unit, he said. Despite hoping for a brand new gallery in the city, he also hoped the festival would retain the energy for taking on a building like this, he said.

Later Sunday evening, down at the Mick Lally Theatre on Druid Lane, the Druids unveiled a powerful piece of new Irish drama. The company’s home base (and Francis O’Connor’s terrific set) is a perfectly claustrophobic and intimate setting for Cristin Kehoe’s new play Shelter. Five people teeter on their own personal precipices, as well as on today’s social edge, as they squat in a disused warehouse which is about to be developed. The excellent ensemble performances in a sharp, accomplished script proves the value of nurturing new writers; Kehoe’s script was a Druid Debut reading last year. The second of Druid’s new plays, Sonya Kelly’s highly anticipated Furniture, opens tonight.

On the eve of full opening, GIAF chief executive John Crumlish was cool but behind the sardonic surface a hive of management was full throttle. He has a call for 80 techs this morning, he told me, as a whole bunch of “curtains” prepare to be simultaneously raised. Those technicians are all action today on several projects: the build for the new Festival Garden which opens on Eyre Square on Wednesday (food and drink, DJs and live sets, info and a box office); plus inflating the huge floating Museum of the Moon installation near Lynch’s Castle on Shop Street again tonight (an amazing impact already - it relocates later in the festival to NUIG’s new human biology building); the get-in for festival production Incantata ( Paul Muldoon’s elegy, starring Stanley Townsend) at the Town Hall theatre, plus get-ins for South African protest theatre The Fall and Australia acrobatic show Backbone. And that’s aside from 60 volunteers working on the Oliver Grossetête The People Build, a floating bridge at Waterside, using thousands of cardboard boxes.

And that’s all just this first phase of some of week one’s shows.

So it’s full throttle, all at once. Aas it’s about to shoot off, Crumlish says: “It feels like you’re getting on a train, and you hope it’s going in the right direction.”