The best films from the 30th Galway Film Fleadh

The 2018 Fleadh was defined by some first-class documentaries. Evidence that we can’t escape our violent past came with Keepers of the Flame, Unquiet Graves and I, Dolours 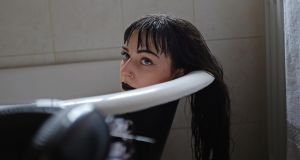 Hugh O’Conor, the admired actor and photographer, made a charming directorial debut with his humane comedy Metal Heart.

To celebrate 30 years on the go, the Galway Film Fleadh offered us a photographic exhibition in the Tribeton complex on Merchant’s Road. We saw Michael Dwyer, this newspaper’s late film correspondent, raising a glass at the Rowing Club. Here’s Jim Sheridan looking perky. Here’s Woody Harrelson holding his foot. And every second collection seemed to feature a photograph of Stephen Frears. It hardly seems right that he wasn’t there to celebrate the Pearl anniversary.

Miriam Allen, managing director and co-founder, was at the premiere of the opening film The Belly of the Whale to acknowledge the lunge into another decade. There are changes. A number of films were screened in the gorgeous – and controversial, thanks to huge delays and financial complications – new Pálás Cinema at the other end of Merchant’s Road. Following a successful run as programmer, Gar O’Brien passes baton to the eager Will Fitzgerald who began by reading out the mission statement from the first programme.

“It might be disappointing to consider we’re still having the same debates about our industry,” Fitzgerald said from the stage. “The flipside is that over the next week we’ll be greeted with such a diversity of image and sound as to reaffirm what the people who wrote this document were dreaming of.”

It is fair to say that the 30th edition of the Fleadh delivered on Fitzgerald’s promise. A few fine Irish films already screened elsewhere fleshed out the programme. The event ended on Sunday night with Lance Daly’s epic famine drama Black 47. It was also great to get another look at Donal Foreman’s superb The Image You Missed. Following up Out of Here, a narrative hit here in 2013, Foreman’s new film elegantly intertwines Irish history and a study of parenthood to form an intelligent cinematic essay.

Morgan Bushe’s The Belly of the Whale, which drew a big crowd to the Town Hall Theatre despite competing World Cup semi-finals, proved to be a very odd mammal. A teenager returns to his rural home and makes efforts to revive his family’s caravan park. Featuring reliably strong performances from Pat Shortt (alternately sinister and sweet) as a money-strapped oddball and Michael Smiley (meaner than the North Wind) as a corrupt politician, the picture appears to be going for rural melodrama in the style of Andrey Zvyagintsev’s Leviathan, but muggy dialogue and muggier plotting undermine the cast’s good work. Another polish or two is needed.

Viko Nikci’s Cellar Door and Paul Mercier’s We Ourselves, ambitious films prepared to grasp at the extent of their reaches, proved the desire to experiment remains alive in Irish cinema. With We Ourselves, Mercier, a veteran theatre director, weaves together a series of monologues concerning young people connected by exile and cunning (sorry about that). As ever with Mercier, the dialogue is honed and the actors – including Seána Kerslake Paul Reid Catherine Walker and Aidan Gillen -- seem impressively comfortable with the busy material. The densely scripted picture asks for the audience’s indulgence, but so strong are the performances and so fecund is the material that many may oblige.

Nikci’s Cellar Door, winner of best first Irish feature, offers another meditation on the Catholic Church’s malign influence on Irish family. Karen Hassan is convincingly distraught as a single mother apparently sucked into a mysterious religious institution where many natural and societal rules no longer apply. For much of its duration, Cellar Door – the title is repeated menacingly – comes across as metaphysical horror. The mellifluous Catherine Walker is strong as the presiding female presence. Mark O’Halloran does good priest. Not everyone will be happy to see the mysteries defanged in a “gotcha” ending, but this is still clever stuff.

On a more mainstream beam, Hugh O’Conor, the admired actor and photographer, made a charming directorial debut with his humane comedy Metal Heart. Paul Murray’s script tells the story of fraternal twin sisters – one a Goth, one the popular fashion buff – who fall out when their parents leave them alone for the summer. Jordanne Jones, who won the festival’s Bingham Ray new talent award, expands her range as the grungy Emma. Leah McNamara, a veteran of Vikings, brings a counterbalancing edge to the sunny Chantal. “Just because you’re miserable doesn’t mean you’re interesting,” she says to Emma. “Just because you’re superficial doesn’t mean you’re nice,” her sister replies with a “kapow”. Aaron Heffernan is hilarious as a nice hunk. The plot is sometimes a little thin, but Metal Heart deserves the attention of distributors.

For this viewer, however, the 2018 Fleadh was defined by some fine (and a few first-class) documentaries. Evidence that we can’t escape our violent past came with Nuala O’Connor’s Keepers of the Flame, Seán Murray’s Unquiet Graves and Maurice Sweeney’s I, Dolours.

Keepers of the Flame, diligent research complemented by attractive landscape photography, began with a treatment of the Irish state’s remuneration scheme for combatants in the War of Independence. It then expanded to become a comprehensive examination of the challenges that accompany commemoration. The historian Diarmaid Ferriter guides us reliably through an underexplored issue that drags up moving testimony while offering warnings about the coming centenary of the Civil War.

Unquiet Graves offered a gritting, enraging examination of the state collusion that accommodated (and sometimes actively drove) the murderous actions of the so-called Glenanne Gang in Tyrone and Armagh during the 1970s. Though it was made on a much thinner shoestring, the rigorously sourced documentary – connecting the Miami Showband killing, the Dublin and Monaghan bombings and other loyalist slaughters -- worked harder at digging up new material and ultimately felt more satisfactory than Alex Gibney’s recent, similarly themed No Stone Unturned. Vital, angry stuff.

I, Dolours will surely generate more controversy than any Irish documentary this year. Derived from interviews between journalist Ed Moloney and Dolours Price, the late IRA bomber, the picture constructs a chilling, lucid portrait of a woman who, though alert and profoundly intelligent, never seems to have lost her dedication to the armed struggle. The story revisits the Jean McConville murder and contains a shocking accusation that, despite his protestations to the contrary, Gerry Adams was once in the IRA. There will be trouble. Some will gripe about the dramatic re-enactments. But nobody can question the sheer power of Price’s testimony.

Brendan Byrne, who made his own, fine Northern Irish documentary with Bobby Sands: 66 Days, moved on to an untold New York story with the sweeping One Million American Dreams. Making evocative use of aerial photography, rich with sensitively handled interviews, the picture told us about Hart Island, a mass just off Manhattan – the original Potter’s Field – that acts as graveyard for the unidentified and indigent. Three stories stand in for the million sad ones referenced in the title. The film will surely become a resource for the ages.

The Fleadh’s great coup may, however, have been their bagging the latest film from ace documentarian Ross Whitaker. There is no more beloved contemporary sporting figure than Katie Taylor and Whitaker’s Katie does a terrific job of fleshing out the enigmas that remain. He has a challenge on her hand. Though famously decent and good-natured, Taylor is clearly not much interested in Californian levels of self-analysis. Circling family help fill in the gaps. Certain mysteries remain impossible to fully entangle. The fight footage is gruelling. Whitaker’s shots of her at rest are more powerful still. Everyone will want to see what Katie did next.