Review: Gemma Arterton and Elizabeth Debicki struggle in a strait-jacket of a script 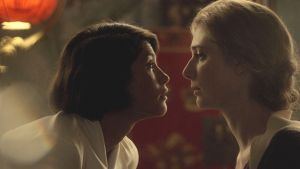 Gemma Arterton plays Vita. Elizabeth Debicki is Virginia. Dorothy Parker famously said the Bloomsbury Group “lived in squares, painted in circles and loved in triangles”. There’s a fair bit of the last thing going on in an often polite film that may have been unlucky to score a 15A certificate. Huge lumps of the letters are read out. Vita and Virginia scare few horses as they slip into a romantic relationship. Indeed, much of Vita & Virginia could play comfortably before Britain’s late Queen Mother at a Royal Command Performance. Do they still have those things?

Yet there are hints throughout of something more curious, experimental and, well, queer. What exactly is going on with the soundtrack? Isobel Waller-Bridge (yes, sister of Phoebe) contributes a pounding electronic score that yearns for greater deviation from Merchant-Ivory norms. We first see Woolf curling sinuously to the beats in a manner that promises creative anachronisms in the style of Ken Russell (I’m seeing a young Vanessa Redgrave in the Russell version).

That doesn’t happen, but Debicki is allowed to do something pointedly odd with her character. Coming across like a heron with gastro-oesophageal reflux – words swallowed mid-sentence – Debicki works new variations on a quasi-historical persona that has (thanks, Nicole Kidman) been ossified by the forces of secular hagiography. The stress and the neurosis are there, but this version of Woolf has an unlikely vibrancy to her. No viewer will expect her to dance nakedly on the nearest podium. Waller-Bridge’s beats will generate no blowing of whistles or brawling on the bus back home. But the performance does shudder off some period dust.

Button, director of the agreeable road movie Burn, Burn, Burn, employs powerful effects to signal Woolf’s looming breakdown: vegetation eats its way into everything she sees; crows sweep down and engulf her. At such points, the picture seems set to lunge into the cinematic unknown. We feel that it may cast off its strait-jacket of a script – which really does feel like a play collaged from letters – and kick together dangerous cinematic energies.

Unfortunately Vita & Virginia always returns to Vanilla Street. Though a more gifted and more versatile actor than Debicki, Arterton is less successful in animating the epigrammatic dialogue. “Men tend to regard themselves as a plant and women the soil,” she says, as if dictating to a manufacturer of novelty tea towels. “This is a poor state of affairs for both sexes. I enjoy the qualities in myself that may be said to be masculine.” This stuff works well enough in the theatre. It clunks awkwardly in the cinema.

The script is also compromised by the compulsion – see also the recent Tolkien film – to treat autobiography as the raw material from which fiction is fashioned. The ultimate destination is Woolf’s transformation of Vita Sackville-West into the eponymous heroine (and hero) of Orlando. The payoff is too neat.

Still, this remains a handsome production bolstered by good performances up and down the dramatis personae. Isabella Rossellini descends from on high to declaim as Lady Sackville. Rupert Penry-Jones is long-suffering as Vita’s husband. Dubliners may whinge that the city’s Georgian streets, standing in for London, look very much like themselves, but locals should always be ignored in such conversations.