Review: Nobody has a hair out of place in this highly buffed account of a German artist 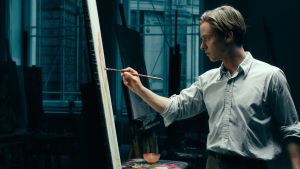 Tom Schilling in ‘Never Look Away’

The latest undeniably enjoyable, absurdly lengthy potboiler from Florian Henckel von Donnersmarck – nominated for best foreign film at the Oscars – has much fun deriding the drabness of socialist realism (and noting the similarities to Nazi art). As a student in the GDR, young Kurt Barnert (Tom Schilling) is forced to construct massive tableaux featuring beautifully bland people in mathematically balanced compositions.

There’s an irony here. You could scarcely imagine a more highly buffed work of art than Never Look Away. Everyone is lovely. Nobody ever has a hair out of place. One half-expects the characters to grab sickles and gaze forcefully into a geometrically perfect sunrise.

The film begins by addressing the Nazis’ horrific murder of the mentally ill, but it does so through the character of a superhumanly beautiful young woman whose sickness manifests itself as skewed wisdom and holy intuition. No dangerous abstraction or subversion there.

The accidental model here is those airport novels that used to arrive with an embossed cover. Based loosely on the artist Gerhard Richter, Kurt graduates from art school, falls for Ellie (Paula Beer), a young fashion designer, has awkward interactions with her sinister father (Sebastian Koch) and ultimately makes for West Germany. The film’s ridiculing of Soviet realism is there replaced by blunt satire of pompous postmodernists in distressed corduroy.

The film seems, in fact, to loathe the business of art. An absurdly crude (and unmistakable) variation on Joseph Beuys is neatly “solved” in a scene that would have caused that awkward artist to either cackle or cry. Almost every satellite character in the art world – east and west – is a pseud, a fanatic or a fraud.

Yet, despite all this, and despite Ellie’s relegation to the role of obedient hausfrau, Never Look Away gets by on delicious sweep and epic voluptuousness.

More than a decade after The Lives of Others, Donnersmarck confirms a gift for mainstream storytelling that few contemporaries can match. First-class personnel add to the lustre. Caleb Deschanel’s cinematography – lush as that in the most indulgent 1950s melodrama – deserves its Oscar nomination. Max Richter’s score is scarcely less delectable. Sebastian Koch makes an excellent villain.

Never Look Away is not a particularly serious film. Bland ideas are sold cheaply. The cosmetic is valued over the nuanced. But it rifles through its own pages as the reader might a yarn by the recently late Judith Krantz.

Don DeLillo: ‘Conspiracies have always been on my mind’
Real news has value SUBSCRIBE