Trial of the Centurys review: An adorably awful comedy musical

Dublin Fringe Festival: Trelliot, twin-brother pop stars who fell to earth, get their day in a cardboard court 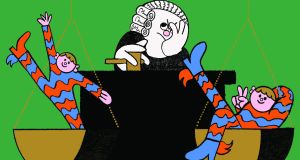 Trial of the Centurys illustration by Ruan van Vliet

TRIAL OF THE CENTURYS

Project Arts Centre
★ ★
“Is that too good?” worry Trevor and Elliot Century, aka the excitable twin-brother pop stars Trelliot, as they burnish their own Wikipedia page (“A non-violent terrorist attack of pure fun!”). Excessive quality is not a major concern for Giles Brody and Bobby Aherne’s knockabout comedy musical, which, at its most ambitious, aspires to be adorably awful.

Introduced by a maniacal sock puppet of the would-be presidential assassin John Hinckley, it follows the legal woes of our childlike, hooray-for-everything space poppets, hauled from their bedroom of inflatable props to face a breach-of-contract lawsuit in a cardboard-box courtroom, and on to a monumentally ridiculous showdown.

Like every element of what you might generously call its design, the show is deliberately thrown together, with comic-strip logic, and dotted with cheesy, caterwauled keyboard songs conceived largely to annoy.

As with the fetching naivety of Kevin McGahern and Tony Cantwell’s pouty performances, artlessness is the sustaining joke: their big hit, Booty Time, “opened so many drawers for us”, protests Elliot. But it’s hard to send up infantile pop stars, never mind justify an 80-minute running time, with a show that feels like the elaborations of a sugar-addled five-year-old.