Repulsion and attraction in New Orleans 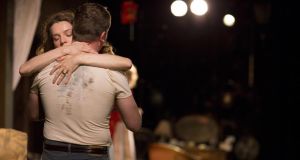 Was there ever a writer who shone a light on desire and despair as well as Tennessee Williams? In A Streetcar Named Desire he throws the sensual and spiritual aspects of sexuality into opposition, but the intensity of its emotional register is easy to parody.

Ethan McSweeny’s gripping production at the Gate Theatre, however, is a model of effective restraint. An evocative score (performed by Esosa Ighodaro and Conor Sheil) and an exposed theatrical frame hold the audience at a distance from the action and mute the threatened melodrama. However, stunning performances from the ensemble cast ensure that the lyrical play retains its full emotional power.

What makes the lead performances so compelling is that each actor subtly plays their character against type. It would be easy, for example, to play the conflict between Blanche and Stanley as a consequence of animal sexual attraction, but in Lia Williams’s and Garrett Lombard’s performances there is as much repulsion as attraction between the pair. Williams’s Blanche displays an acute sense of her own ridiculousness, which only tips over into true delusion when Stanley insists on exposing her past.

Lombard’s cruelty, meanwhile, is forced by humiliation rather than perversity. Catherine Walker’s pragmatic Stella is the peacemaker gently attempting to make each see the other’s perspective.

What is really at stake in McSweeny’s production is not just desire but two different ways of seeing the world, as Blanche’s idealism is gradually eroded by Stanley’s realism. This brings a different sort of brutality to the rape scene, which is presented in a stylised series of quick tableaux that dampens the violence but not the sense of violation.

Paul Keogan’s lighting is particularly important here, eschewing naturalism for the illumination of psychological states instead. The final scene exposes the Kowalski flat in all its merciless shabbiness, emphasising Stanley’s victory – the triumph of reality – but it is not just Blanche who suffers, and Walker’s moving tribute to her sister in the final moments makes the tragedy her own.

A Streetcar Named Desire is more than three hours long, but there isn’t a moment when it is less than compelling. In this fine production “an hour isn’t just an hour, but a little piece of eternity”. Until September 21st

Dancing with the Stars: Shock exit for teary-eyed Sinéad O’Carroll
9

Growing up in Derry: ‘The Troubles was like a fog that hung over everything’
Real news has value SUBSCRIBE