The Coëtivy Hours manuscript: the smartphone of its time

Nest week, the Chester Beatty Library puts on display one of the greatest art works from the 15th century 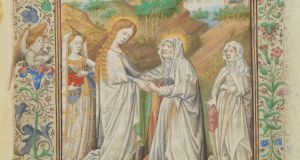 Miniature Masterpiece: The Coëtivy Hours offers an unprecedented opportunity to see one of the acknowledged masterpieces of illuminated manuscript production from the 15th century.

The manuscript’s 364 folios are each decorated with coloured decorative borders on a fantastically detailed miniature scale. But what makes the exhibition special is the fact that 144 of the manuscript’s 148 three-quarter page miniature paintings have been mounted and framed and can be examined in one visit to the Chester Beatty Library, where they will be on display until the beginning of September.

The Coëtivy Hours was acquired by Edith Beatty in 1919 as a sixth wedding anniversary present for her husband, the collector Alfred Chester Beatty (the exhibition marks the 50th anniversary of Beatty’s death. He left his extraordinary collection to the people of Ireland). Edith paid £4,000, or about €200,000, to the collector Yates Thompson, who had purchased the manuscript in Paris in 1900. It was Beatty who ordered the removal of the paintings from the manuscript, so that they could be appreciated in their own right. They were placed between sheets of glass. If he hadn’t done so it is unlikely that we would have the opportunity to see them en masse now: dismantling the manuscript would probably be a curatorial step too far.

As a collector, Beatty was a stickler for quality. In whatever area he chose to explore, historically and geographically, he was only interested in the finest examples of what was on offer. He must have been delighted at Edith’s gift - though who knows, it may not have been a complete surprise to him.

Even a cursory glance leaves a viewer in no doubt that not only is the quality of the work superb, but that as an object, the book is in an amazingly good state of repair, to the extent that it needed very little restoration work. Its colouring and its generous applications of gold, are remarkably fresh and clean. The blue pigment used – probably azurite - has a tendency to powder, and in tiny patches can lift, say, superimposed gold, especially gold applied as flat, polished leaf.

Liberally applied shell gold highlights have proved more durable. Occasional silver highlights have tarnished, but in truth it is surprising how well the materials have lasted.

Standing the test of time

What is the secret of its durability? The answer, say the Chester Beatty conservators, is that those who created the book really knew what they were doing. It represents the higher end of the high point of a manuscript industry that depended on a carefully nurtured set of skills. It’s thought that sheep, goat and calfskin were variously used in the parchment, which is quite clearly of amazing quality: it is really thin, even and unblemished. As was the practice, the miniatures – the vast majority of them, at least – were painted in demi-grisaille. That is, built up tonally in shades of black-and-white, with an overlay of more naturalistic colours applied in thin layers, and gold highlights then added. Again, the level of detail within each image is breath taking, and they retain their integrity to high levels of magnification.

Dependable, durable and widely available, lead white is a basic, indispensable ingredient, with carbon black at the opposite end of the tonal scale. Three different reds; an organic dye; a synthetic red, possibly vermilion, which is used notably to simulate blood splashes; and an orangey, widely used, red lead. Equally, several greens are evident. The azurite blue was probably modified with indigo. Ultramarine was not only costly but was by then, hard to obtain. The organic purple dye was probably derived from lichens. The yellows were probably ochres. Books of Hours were personal prayer books centred on the text of the Divine Office, with eight canonical hours marking the times for the recitation of specific prayers. But the rules governing the Divine Office were complicated and varied according to a host of factors. So, early in the 13th century, a simplified version emerged: The Little Office of the Virgin or the Hours of the Virgin. Hence the Books of Hours.

Each tiny painting is pretty much like a full-size altarpiece in miniature. The iconography is the same, and the level of detail is mind-boggling. Variations on the theme of the Virgin and Child and the Holy Family abound. Over 40 miniatures are given over to the saints, with quite a number of martyrdoms, usually depicted in grisly, matter-of-fact detail: beheading is the most common means of execution, as with St Denis, but there were other nasty forms of death.

Apart from the miniatures, the decorative borders are dense floral scrolls populated, on closer inspection, by an extensive cast of human, animal and supernatural  characters, knights and ladies, apes and lions, numerous birds, jesters and musicians, mermaids and dragons. There are no repeat-pattern shortcuts, the artisans’ touch enlivens what could easily be repetitive and dull.

It was made in a Paris workshop. Paris was a centre of manuscript production at the time, but it was not the only centre in France. The man who commissioned it, Prigent de Coëtivy, was Admiral of France, but he was also a bibliophile of some renown and it was made to mark his marriage to Marie de Rais.

De Coëtivy’s book is attributed to the workshop of the Dunois Master, former senior associate of the Bedford Master (their joint style is dubbed the Bedford Trend), whose strong influence – and arguably his hand - is, apparently, clearly evident in some of the miniatures. While Dunois was surely an apprentice to Bedford, he may even have been his son. In any event, commentators have noted that close observation confirms the contribution of more than one artist. This is not surprising, given the scale of the enterprise and workshop practice, involving masters, assistants and apprentices. Multiple hands might be evident in a single miniature.

The quality of the painting in the margins is notable – though it seems that standards slacken just a little in the home stretch of the last 50 pages or so. Many of the miniatures show a clear knowledge and the influence of contemporary painting. In the Netherlands, there was a direct crossover, with panel painters working on illuminated manuscripts.

Coats of arms appear in the book’s borders on about 50 occasions. Originally these coats combined the emblems of the de Coëtivy and de Rais families, confirming the presumption that Prigent de Coëtivy commissioned the book following his marriage to Marie de Rais. The marriage contract, negotiated in 1442, gave the confiscated de Rais family lands to de Coëtivy and also the de Rais “name, arms and titles.” The latter stipulation was amended to say that the arms of the two could be combined.

There is a strange background to this marriage arrangement. Marie’s father was the infamous Gilles de Rais, who had fought alongside Joan of Arc but was executed in 1440, together with two of his employees, having confessed to and been found guilty of the sadistic murders of an unknown number of children. His crimes are said to have inspired Charles Perrault’s story Bluebeard. Some commentators have suggested that de Reis may have been innocent and see him as a victim of a political conspiracy, but the arguments are convoluted and unclear.

Apart from being a celebrated bibliophile, de Coëtivy, a Breton, was by all accounts a brave man and was prominent at the French court. He was appointed Admiral of France by Charles VII in 1439. However, following the decisive battle of Formigny in April 1450, the beginning of the end of England’s hold on Normandy, de Coëtivy was observing the siege of Cherbourg on July 20th when he was unfortunate enough to be killed by a cannonball shot, presumably, by one of his own cannons. Following his death, his inheritor, his brother Alain, amended the coats of arms in The Coëtivy Hours. De Coëtivy’s widow Marie went on to marry again.

The Coëtivy Hours is a dazzling reminder that human beings of any era are exceptional in being able to work ingeniously within the limits of whatever technology is available to them. Books of Hours, hugely varied in quality, were the bestsellers of their day. Marvels of miniaturisation, their equivalent today is probably not so much a printed volume as a smartphone. Their makers marshalled a huge range of materials and techniques to create complex, practical objects for daily use. In their startling intricacy, those floral borders seem to prefigure printed circuits and silicone chips, and they will probably outlast them.

Miniature Masterpiece: The Coëtivy Hours is at the Chester Beatty Library, Dublin Castle from March 9th to September cbl.ie

Fleabag: Three final minutes at a bus stop will go down as classic