The Great Gatsby at the Gate: a magnificently entertaining, dizzying party 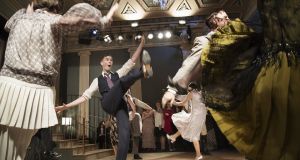 All that jazz: Cast and audience get into the swing of things in The Great Gatsby. Photograph: Agata Stoinska

There’s an old story in which the actor playing the doctor in A Streetcar Named Desire – a very minor character – was asked to describe the plot. “Well,” he said, “it’s about this doctor who takes this crazy lady off to an asylum.” From each perspective, everyone is the star of the show.

In The Great Gatsby, a riveting immersive production that sends F Scott Fitzgerald’s characters – major and minor – skittering throughout Jay Gatsby’s mansion, you may feel the same. In a bold bit of casting, the mansion is played by the full expanse of the Gate theatre, marvellously transformed in Ciaran Bagnall’s fastidious design.

Sheaved into groups between its shimmering jazz bar, speakeasy, and several lush private rooms, you might witness the poignant dreams of a tragi-comic Mr McKee (who barely get five pages from Fitzgerald) and decide from Raymond Scannell’s deft performance that the show is about this inebriated photographer who will never find focus.

Such are the possibilities in director Alexander Wright’s free-range adaptation, which worries little that we will ever get the whole story, because, in an individualistic age of splintering narratives, it knows we never do. Here, even Nick Carraway, the novel’s dry narrator, can never give a clear account of himself or, perhaps, anyone else. Marty Rea’s charming performance suggests a man less reserved in judgement among the social climbers and strivers, than another spinning soul looking for a centre.

If that is Gatsby, whom Paul Mescal makes a butterfly of self-creation, among an ensemble in constant motion and fluttering improvisation, it falls to the audience to do Carraway’s job and observe.

Both the performances and the spaces provide an abundance of detail: Rachel O’Byrne’s slowly tempered “new woman” cynicism as Jordan; Peter O’Brien’s smart costumes; some sly self-references to the Gate’s history scattered among the props, among other teasing anachronisms; and, from fugitive angles, the chance to see in Mark Huberman’s fluid performance of the boorish Tom Buchanan, something frustratingly human.

It makes for an experience built up in discrete moments, rather than long arc, where you are as much watched as watching, which feels like a concession to our distractible present. When characters solicit audience feedback (“Was I an asshole?” asks Gerard Kelly’s winningly bluff George) we get another: a show with its own comment section.

Swept away with a small group as Gatsby and Daisy flee calamity, I was first unsure what any intimate embellishment could add. But in close proximity to Charlene McKenna’s affecting performance of Daisy’s glittering life once again in sad compromise, she pauses to ask, “What would you do?” The show is a magnificently entertaining, dizzying party, but to see things from her side, in overlooked shadows, it was hard to come up with a better answer.