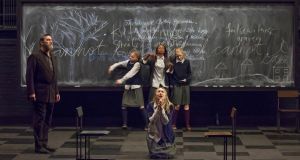 Broadway took Ivo van Hove into its glittering heart for his production of A View From The Bridge, so returning to Arthur Miller feels like it should be a sure thing. It is. We are in Salem, and with potential witchcraft afoot, the play opens with an unconscious child and accusations of summoning spirits and dancing in the woods ping-ponging around a paranoid town, where, as throughout the 20th century and now in a politically bizarre time, the answer to questions no one asked is fascism.

The cast almost trips over itself with talent. There’s Ben Whishaw’s wonderful John Proctor, vulnerable and willowy, a Snowden among the censors. Jim Norton plays his Giles Corey as naive with goodness. The prodigious Tavi Gevinson is excellent as Mary Warren. Jason Butler Harner presents a Rev Samuel Paris of two haves: the first with the bolshy arrogance of clergy; the second snivelling and disempowered. Sophie Okonedo is loaded with feeling as a resilient Elizabeth Proctor. Bill Camp is brilliant, conflicted and complex as Rev John Hale. Perhaps best of all is Ciarán Hinds, magnificent as the unwavering Thomas Danforth, utterly convinced of his own warped, yet commanding, righteousness.

But it’s Saoirse Ronan who monopolises the production’s marketing. Fresh off all the red carpets that matter, being part of a van Hove production of a Miller play in a cast of this strength should solidify her as both a smart and sparkling actor. With Ronan, it’s all in the eyes. She possesses a remarkable power to convey so much in the flick of a glance, something that is devastating on screen and utterly malevolent here. How can such micro expressions be simultaneously subtle yet plundering? Ronan moves around the stage like a chess piece. There’s a coldness to her performance that chimes with the character’s manipulating streak, but that also creates an Abigail that is ever so clipped.

Van Hove pairs stars with starkness. A minimal, brightly lit set occasionally bows to blockbuster flourishes: scrawls on a prominent chalkboard come alive with sinister projections; wind howls; lights crash. Philip Glass’s original score prowls underneath everything, a constant bed of tension and unease. This is a faithful and compelling piece of work, sinister, claustrophobic, and frighteningly real. The McCarthyism that Miller filleted by using the Salem witch trials as a lens, inevitably leads us to contemporary rhetoric and paranoia based on ignorance and hate. The Trump Tower is only eight blocks north, after all.