Leonora Carrington: the mythical world of a rediscovered surrealist

Imma is showing a body of work by a contemporary of Frida Kahlo and Dali who has long been under-appreciated in a country that inspired much of her work: Ireland 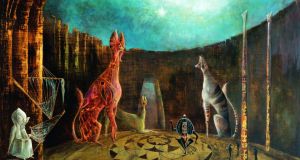 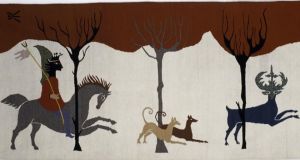 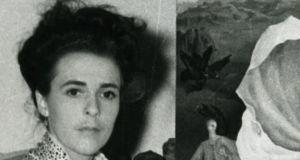 The surrealist artist and writer Leonora Carrington died in Mexico in 2011. She was 94, and had led an eventful and productive life, from reluctant debutante in England to bohemian in 1930s Paris, from despair in a Spanish asylum to many decades of stable artistic productivity in Mexico City. Though she’s long been celebrated and honoured in Mexico, it’s only quite recently that her reputation has grown on this side of the Atlantic.

While she has a solid international reputation, in terms of fame and renown, she’s not in the same league as some of her male contemporaries, including her sometime partner Max Ernst, or Salvador Dali, who acknowledged her artistic ability. Her gender surely has something to do with that. The surrealists were radical iconoclasts in many ways, but most of them were men and they largely conformed to the male chauvinism of their times. Carrington’s work, and that of many 20th-century female artists, writers and designers, has only been substantially reappraised in the last few decades.

In her paintings, she generates a heady fantasy world. It draws on elements of folklore and fairytales, Celtic and other mythologies, various occult and mystical traditions including alchemy, purely personal inventions and, by no means least, Italian Renaissance painting. There’s a lot going on, but she’s not trying to devise a narrative universe like Tolkien in Lord of the Rings. Motifs recur, but she doesn’t tell one single story. She deploys a cast of human, animal and transformative, hybrid characters in a deep, pliable, dreamlike space of infinite possibility. Often there are Gothic undertones, perhaps recalling the Lancashire mansion that she grew up in and longed to escape: twice expelled from school, she was instinctively opposed to her parents’ social aspirations.

Background of intensity
As the art historian Dawn Ades describes it, Carrington grew up in “a social world of arcane rituals, subtle hierarchies, animal sacrifice and festering tradition”. That is, she elaborates, a county family in England. It’s natural that Carrington would draw on her background. When it comes to work, artists are omnivores who tend to use everything. But Carrington’s background is evident in her paintings in a stark, cruel anthropological way, just as Ades expresses it, far removed from any sense of cosy familiarity and recollection.

The fantasy in her work has a disturbing, sometimes violent, edge. It is rooted in the jagged realities of personal experience and emotional life, her own and of course many others, in a way that links her to such artists as Louise Bourgeois, Paula Rego or Frida Kahlo. The latter, incidentally, knew her but tended to regard her as a European interloper in Mexico. In a way, it’s Carrington’s insistence on the primacy of her own experience and imagination, as a woman, that is especially significant in her early work.

In line with the male surrealists’ view of the role of women, she was often assigned the subservient role of muse to Ernst, implicitly diminishing her, even though she remarked that she was far too busy getting on with things to be a muse. There’s another, local layer to her under-appreciation. She’s little known in Ireland, where she is scarcely represented in public collections – the Mexican government gave a sculpture by her to Imma – even though her mother, Maurie Moorehead, was Irish, from Moate in Co Westmeath and, as Imma’s current show sets out to demonstrate, Celtic mythology underlies a great deal of her fabulous, dreamlike imagery.

She described reading Robert Graves’s The White Goddess as a decisive experience. Drawing on a range of European mythology, especially the Welsh and Irish traditions, Graves controversially proposed the presence of a consistent, if variously named and depicted, goddess. In doing so he was revealing an alternative, potentially feminist mythological and religious predecessor to familiar, patriarchal models. Add to this influence Carrington’s memories of stories told to her by her mother and her cherished Irish nanny, Mary Kavanaugh, and you can begin to see what she’s getting at in her pictures, even if nothing quite prepares us for their edgy strangeness.

That leads us to her plunge into surrealism. Before she was 20, having seen the work of Max Ernst at a major surrealist exhibition in London, she met him at a dinner party. He was 46 and married for the second time but, almost immediately, they ran off together, to Cornwall and then to Paris, where he separated from his wife, and Carrington found herself at the heart of several charmed artistic circles variously including Picasso, Dalí, André Breton, Man Ray, Marcel Duchamp, Joan Miró and others. Although she never considered herself a card-carrying surrealist, she embraced the spirit of the movement with theatrical zeal; for example, she repudedly turned up for a party wrapped in a sheet, which she strategically discarded to reveal that she was naked beneath it.

She and Ernst were reportedly known to clip the hair of their houseguests as they slept, then serve it to them mixed in their breakfast omelettes. That may have happened at the house she bought in a small Provencal village, St-Martin d’Ardéche, during an idyllic few years when they lived and worked happily together. By then Carrington’s work was well known.

Then war broke out, the Germans invaded, and in time Ernst was interned by the Vichy administration. It was the beginning of a profoundly disturbing period for Carrington. After Peggy Guggenheim engineered his release, Ernst grabbed the chance to join her in the US, where they married. Carrington, who may already have suffered a nervous breakdown, hitched a lift with friends to Spain. She became delusional and was dispatched to a mental asylum.

She later wrote about this time, but it’s not quite clear if what she wrote was literally true, as there are several divergent accounts of what happened. What’s certain is that it was all pretty horrible until, in a twist worthy of novelist John Buchan, her nanny turned up to rescue her, having travelled via Lisbon by submarine. Carrington wanted to be rescued, but only up to a point. Rather than returning to England, she sought refuge in Mexico with the help of a friend of Picasso, the poet Renato Leduc. They married so that she could gain residency rights in the country.

Quite soon after, she met photographer Emerico Weisz who she married for love rather than expediency. They had two sons. Several exhibitions in recent years have enhanced Carrington’s reputation and established her historical importance. The Celtic Surrealist, which includes 50 paintings as well as works on paper, sculpture and tapestries, provides a welcome opportunity for the Irish public to finally become acquainted with the work of a major 20th-century artist with significant local connections.