The Water Orchard review: How to avoid being reduced to an emoticon 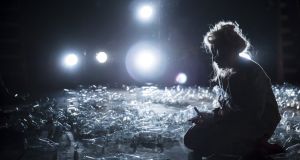 Anyone who has felt harassed by their sat nav will sympathise with Old Madeline in Collapsing Horse’s new production, as she is interrogated by means of snatches of text projected on a huge green screen. This prolific Dublin theatre company has played with elements of science fiction in its recent work for stage and podcast (Science Fiction Radio Hour), with a gift for viewing the familiar through a heightened lens. That “the voice in the machine” has here become an agile digital adversary is not a leap into fantasy: just a slight skewing of the recognisable experience of interacting with new technology.

A powerfully eerie sense of disembodiment results from this opening juxtaposition of high and low tech, separating voice, text and body: Madeline is a puppet figure created by a simple straw hat and white sheet, her recorded voice (Eleanor Methven) responding to the projected texts. There is a danger that her fragile self might disappear into the screen, or be reduced to an emoticon before her secrets are extracted, and we discover what has happened to her.

Revelations connected to a vital natural resource suggest that an ecological drama might unfold, or perhaps a commentary on the politics of water charges. Instead, the Big House drama tradition is abstracted and infused with farce. Writer Eoghan Quinn gives a Chekhovian tinge to a declining family’s attempts to liquidise their assets by turning their former “water orchard” into a tourist attraction – a plan opposed by the matriarch, Madeline. The talented, high-energy ensemble relishes the not-quite-absurd notion of talking about the only remaining bottle from the fabled “1978 vintage” as if it is a collector’s item, or holy water.

In tweeds and plus-fours worthy of PG Wodehouse, Rachel Gleeson is Madeline’s conservative daughter, Noelle, becoming increasingly manic about maintaining order and harmony, even if it can only be achieved by an imposition of radical change. Squabbling with her brother (Peter Corboy), they fend off two duplicitous house-guests who have their own agendas (John Doran and Breffni Holahan).

At times the piece and its bubbling ideas seem to slip away from co-directors Eoghan Quinn and Dan Colley’s grasp into a series of insistent gags about the nature of acting and performance, which probably seemed sharper in rehearsal. While all of the characters undoubtedly thirst for something, the brilliant dramatic potential of water as a scarce, invaluable, commodity gets diluted.