Jean Butler: ‘It’s very exposing for both of us’

Her new work, with musician Neil Martin, is designed as a conversation between music and dance and sees her going back to her roots 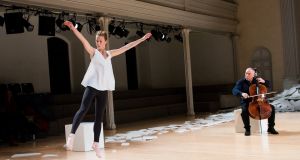 Jean Butler and Neil Martin in This Is an Irish Dance: “We wanted to make this really connected,” says Martin, “to get to a place where the movement was unconscious, and intuitive,” adds Butler.

There is an unmistakably relaxed air about the choreographer and performer Jean Butler as she talks about her new work, This Is an Irish Dance.

Around a decade ago, Butler began the transition from traditional Irish stepdance virtuoso, most famously with Riverdance, to a new modern dance practice. Now, you get the sense she is in an exciting phase in her relationship to that earlier training and performance culture, which once wholly defined her.

The title of the show, intrinsic to an acknowledgement of her roots, also points to a new diversity in Irish dance. Maybe she now hopes it will give her a distinctive voice in the contemporary dance world. Many leading choreographers have drawn on defined dance heritages, from the modern ballet idiom forged by William Forsythe to the recent realigned kathak tradition of Akram Khan.

We are in Annaghmakerrig, inside the rehearsal dance studio at the Tyrone Guthrie Centre. Musician and composer Neil Martin and choreographer and performer Jean Butler are engaged in what she lightly calls a bit of “tweaking” (the show premiered in New York at the end of 2015).

After a moment’s conferring, Martin takes up his position at the cello. Butler’s body begins to shudder almost imperceptibly with the sonorous rhythm. The original creative process was one of extemporising and improvising. The idea was for this to be a true duet – a live dialogue between movement and music.

Martin plans to play without a score to underline that sense of intimate conversation. He collaborated with Stephen Rea on a performance of Heaney’s Aeneid book VI in last year’s Kilkenny Arts Festival but still finds this experience unique.

“I certainly didn’t expect to be on the stage,” he admits wryly, although clearly revelling in the newness of it all.

“It’s very exposing for both of us,” says Butler.

“We wanted to make this really connected,” says Martin, “to get to a place where the movement was unconscious, and intuitive,” adds Butler.

Martin will also move around the space during the performance. “Sometimes I’m behind her, sometimes in front,” he says. “We lead and follow in turn.”

“I was always interested in working with a musician/composer,” says Butler. “Music has been a way for me to explore and, of course, in my other tradition, music and particularly live music was vital; the percussive beat and rhythm were everything.” Attentive audiences may detect nuances of that other tradition: a fine, skittering footwork borne from a deep and considered training or a haunting ripple of an Irish air, as the cellist is also a fine uileann piper.

The new show is a collaboration in other ways, partnering with Danspace Project, where the work premiered, and with the Irish Arts Centre (both in New York), and with Project Arts Centre in Dublin.

The show closes Project’s season celebrating its 50th birthday. The space started as a centre for artistic experimentation, initially with the visual arts and theatre, but it soon embraced contemporary dance. Its roll-call of featured artists is impressive, including David Bolger, Finola Cronin, Michael Keegan-Dolan, Cathy O’Kennedy, Mary Nunan, Fiona Quilligan, Liz Roche, John Scott, Dance Theatre of Ireland and Junk Ensemble, and the latest generations of dance makers and performers, from Emma Martin to Liv Donoghue and Philip Connaughton.

Jean Butler agrees. “I think that the artist is very much at the centre of it [which is] not always the way with organisations.”

Paul Johnson, who is now chief executive of Dance Ireland, was appointed its first choreographer-in-residence. He recalls that being made a full member of staff and “being treated equally was very validating”.

Project’s New Music, New Dance festival emerged in the late 1980s and was a seminal event that helped sow the seeds for the international Dublin Dance Festival, founded in 2002 by Catherine Nunes.

“Everyone in Project got involved,” remembers Gaye Tanham, who was dance officer with the Arts Council at the time. “They even set to finding a creative solution for that inhospitable concrete floor, with gym mats and wood.”

Teeming with aspiration and ambition, that experiment with music and dance paid scant attention to scant resources. John Scott remembers “being told in no uncertain terms that I would not be allowed into the festival bringing a tape of recorded music. The message was to get out there and find a composer. And so we all did.” Exciting new duets ensued, including Roger Doyle with Snaggy O’Sullivan and Raymond Deane with Fiona Quilligan.

“I credit [then Project director] Willie White with taking a leap when commissioning my first piece, Does She Take Sugar?”

White’s perspective is clear: “We felt it was very important to support a new artist transitioning in the way Jean Butler was: pushing boundaries, pushing herself. The resources, as everyone knows, were modest but there is practical support too that we can offer artists.”

As Cian O’ Brien, who co-commissioned this new work, notes, “When I was appointed director [of Project], I felt it was important to maintain those relationships which Project had previously invested in. They are so worthwhile, for both the artists, us and audiences.”

This Is an Irish Dance is at Project Arts Centre, Dublin on February 8-11, then tours to Limerick (17) and Bray (March 2). projectartscentre.ie

Just Like You: Nick Hornby’s contemporary love story nestled in a Brexit novel
6

Rialto: A searing Dublin movie that will stay in your brain
9

Bearman of Buncrana: not the odyssey into rural Ireland’s heart of weirdness we wanted
Real news has value SUBSCRIBE