‘I might as well have my existential crisis in Edinburgh’ 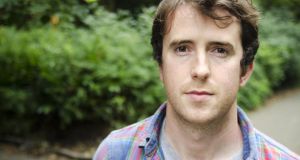 Playwright Ross Dungan began his creative life as a comedian, and it comes as no surprise; even his greeting is laced with self-deprecation and irony. He is chatting from the office of Rough Magic Theatre Company, which is supporting his theatre company 15th Oak, for its production of Dungan’s latest play, Reckoners. The voice in the background, he says, is “his personal secretary. I am that kind of guy now.”

A graduate of Trinity College’s drama studies department, Dungan found himself “floundering” when college ended. “I was working in event management, but had a notion that I wanted to do something creative.” A friend, Matt Smyth, who is now a theatre producer with 15th Oak, was involved in a comedy show called A Betrayal of Penguins, which had performed at the Edinburgh Fringe Festival in 2008.

The following year the troupe split up just after committing to a second outing in Edinburgh. Smyth invited Dungan to join him and Dungan, despite his reservations, agreed. “I thought, well, I might as well have my existential crisis in Edinburgh. It was an opportunity to do something performative,” he remembers, “and to write something on a creative level, but to call it comedy is probably generous.”

Still, the group survived and were invited back for a third time. Despite their success, Dungan hated it. “It was my worst nightmare, being on stage. I enjoyed writing and I was vaguely amused by the affirmation when things went well, but I suffered from the most crippling anxiety.” He decided to leave performing behind and focus on writing for the theatre.

Dungan had first been turned on to theatre by a very specific performance that his English teacher at Wesley College, Niall MacMonagle, brought him to when he was in fifth year at school. “It’s a pretty stereotypical story,” he says, “but I was always really into film, hadn’t really given the theatre much thought, but then Mr MacMonagle brought us to see Faith Healer at the Gate, the production with Ralph Fiennes in it, and it was jaw-dropping.

“It was the most amazing experience I had had in terms of engaging with storytelling and I remember walking out and thinking, ‘film could never do that’.”

When Dungan started his degree (with a minor in film studies), he became involved in DU Players, where he could experiment. “It goes badly, but the next time it goes less badly. The next time it’s worse again, but you are always learning.”

Faith Healer was a big influence on his first play, Minute After Midday, three monologues offering different perspectives on the Omagh bombing, which he premiered at Edinburgh in 2011. “Yeah, people usually notionally graduate to Edinburgh,” he says of this unusually ambitious debut, “but we decided to take a ridiculously cavalier approach and have a few previews in Dublin and go over to Edinburgh.

“I mean, we had good contacts, had delivered good audiences for our comedy shows and here we were again, at this joyous festival, flyering for a play about a horrific tragedy. Y’know, it was hard to come up with a snazzy pitch.”

The production struggled to get an audience until it won a prestigious Fringe First award. They performed it in Dublin later that year. Dungan’s next play, The Life and Sort of Death of Eric Argyle, was more structurally ambitious.

An expressionistic ensemble piece set in limbo, it remembered the life of its 58- year-old hero in a series of comic scenes reminiscent of the sketches that first led Dungan to Edinburgh. But there was also a sophisticated metaphysical truth to the play. It also premiered in Edinburgh to rave reviews and, when it was performed at the Dublin Fringe Festival later that year, it was nominated for an Irish Times Irish Theatre Award for Best New Play.

Dungan will premiere his latest play, Reckoners, at the Tiger Dublin Fringe on Monday, he says drolly, “without the Edinburgh try-out. The Fringe will kill me for saying this, but it was a last-minute thing, the decision to do a show. It wasn’t even written.”

It started off as a “relatively simple idea, but then it grew into something else”. It is set in a fictional location called The Stra, a lawless place of warring tribes, where a family makes plans to get revenge upon an old adversary, newly released from prison. Although it is structured as two monologues, there is a huge cast of characters and a variety of technical challenges.

He is delighted to give the work its first outing at the Dublin Fringe this time. The difference between the two festivals, he says, is not just one of scale. “Edinburgh is an enormous event. Nothing could compete with it, but that’s not the only thing.

“The Dublin Fringe is highly curated, loosely based around some kind of a theme, whereas Edinburgh is a total smorgasboard, a melange of anything and everything, shows you think couldn’t possibly be shows but are, and there are five versions of it and then five musical versions.”

“But the thing about the Dublin Fringe,” he concludes, dropping the irony for a moment, “is that you feel like you are part of something very specific. There is a real sense of homeliness. Because the programme is a 100th of Edinburgh’s, you are sharing a space with one or two other companies, not 10, and that intimacy means there is attention paid to each show.” I wait for the punchline: “And yeah, it means you can get your friends to come too.” Reckoners is at The Lir from September 15th-20th, as part of Tiger Dublin Fringe