Forget Slane. And Electric Picnic. Music in fields is so over 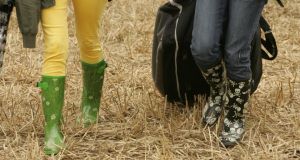 Live music goes outdoors for the summer even though the Irish summer weather can be decidedly unsuited to standing around waiting for a band to come onstage. Photograph: Alan Betson

If you’re a live-music fan the June bank-holiday weekend is when the action moves outdoors.

Foo Fighters are playing this weekend in that big hilly field at Slane, in Co Meath. Fans of more cutting-edge music have a choice between the Forbidden Fruit festival, in Dublin, and the Life festival, in Mullingar, both of which run until Sunday night.

This is the season when live music turns its back on venues with walls and roofs in favour of temporary arenas in the great outdoors. Whether it’s a stage at one end of a lumpy paddock or sportsfield, or a large tent better suited to a circus, live music is competing with cattle and GAA matches for green grass for the next few months.

There’s no doubt, though, that these fields are better suited to cattle chewing the cud and Gaelic footballers sledging one another than bands and acts performing music.

Live music simply sounds better indoors – and anyone who says otherwise must have a patch of land they want to let out to a promoter.

Indoors, sound systems don’t have to compete with gale-force winds sending the sound all over the shop. The audience don’t have to stand in a puddle of mud.

There’s usually no distraction from people who’ve come to the gig to eat greasy burgers or wave Tricolours. Look around you at the next outdoor gig: there’s always some eejit who packs a Tricolour along with his waterproof trousers and inflatable hammer.

Regardless of this, live music goes outdoors for the summer – even in Ireland, where summer weather can be decidedly unsuited to standing around waiting for a band to come onstage. It doesn’t matter.

If it’s the summer and it’s an act who can pull a crowd, you’re going alfresco.

Much of this is down to supply and demand. The live-music business can make more cash for all concerned by hosting shows in big fields or stadiums, because the act has to do only one or two shows rather than a longer run.

You’d need to book a venue like 3Arena for a fortnight to satisfy the kind of demand generated by a proven crowd-puller like Ed Sheeran, who’s having a two-night run at Croke Park in July.

Then you have the festival factor, which has become an inescapable, and inexplicable, part of the summer ritual. The modern Irish festival began with the Trip to Tipp bringing the Bacchanalian delights of the Féile experience to Thurles 25 years ago this summer.

But the mania for festivals really went into overdrive about a decade ago, when Electric Picnic came on the scene, offering a boutique experience to those who decamped to Co Laois.

That ambience has been disappearing with every passing summer and every increase in capacity at Stradbally, but it gave the gig-going classes a taste for outdoor soirees.

Since 2005 the number of small and medium-sized festivals on the Irish scene has mushroomed. It means that Irish twenty-, thirty- and fortysomethings have something other than the weddings of family and friends to fill their summer weekends.

For acts the festival circuit really is the only game in town over the summer because of how the business operates. Bands with a good following and an international cachet can rely on some decent paydays without the risk of undertaking their own expensive tour.

But for acts on the lower rungs of the ladder – especially Irish acts with no foreign drawing power – festivals can be a bitter-sweet experience.

There was much fuming on social media last year from acts who ended up playing well-regarded commercial festivals in Ireland in return for a few tickets or a slab of beer.

In the case of Kilkenny’s Light Colour Sound festival last July, acts are still waiting for the promoters to pay agreed fees.

Earlier this year the Killarney Festival audaciously attempted to introduce a pay-to-play stage, where acts would sell tickets in order to perform.

But Irish bands quickly rounded on the promoters, and the idea was abandoned.

Many acts would probably happily swap their festival berth halfway down the bill on the third stage for an indoor gig at a decent venue. At least they’d get to play for an audience they knew had come to hear them.

At least then the audience wouldn’t indulge in festival high jinks during one of the quieter tunes. And there’d be no danger of people wandering into the place looking for their lost mates. Time to leave the fields behind.

The Chicks: ‘We were accepted because we made them a lot of money, but they didn’t like us’
6

The power of literature in a time of plague
8

Anne Enright: ‘Nuala O’Faolain was an impossible person, to whom we owe so much’
10