The relationships between the Abbey Theatre, the Government and the Arts Council show plenty that’s wrong with arts governance in Ireland 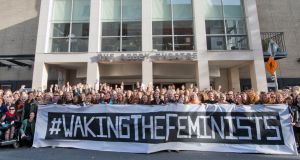 Thursday’s Waking The Feminists event at the Abbey Theatre, which highlighted the lack of gender equality in the Abbey’s programme of events for 2016. Photograph: Brenda Fitzsimons

Thursday’s thrilling #WakingTheFeminists meeting at the Abbey Theatre may be a turning point in the fight for gender equality in the arts. But something else in the affair of Waking the Nation, the Abbey’s male-dominated 2016 centenary programme, is all too familiar: bad governance.

If we ask how we got to the point where the National Theatre didn’t notice that its “nation” was made up almost entirely of people with penises, we must of course look at the deep roots of male privilege and female marginalisation. But we also have to look at rather more boring and mundane things: sloppy governance in the arts. Three huge questions have to be answered about three sets of relationships: the internal governance of the Abbey; the relationship between the Abbey and the Government; and the relationship between the Abbey and the Arts Council.

1 Where is the Abbey board?

On Thursday’s Six One News, on RTÉ, after the rally in the Abbey, Bryan Dobson interviewed in studio the fine playwright Deirdre Kinahan. She spoke with great eloquence about her position as a woman writer whose work has been acclaimed in London, New York and elsewhere but who has had to struggle to have her voice heard in the Irish theatre. It was a huge tribute to the brilliance of the #WakingTheFeminists campaign that Kinahan was now being heard on the main news programme.

But there was also something slightly weird about the interview. Bryan Dobson did not ask Kinahan whether she had raised all of these issues in the Abbey’s own boardroom. Kinahan is a member of the Abbey board, which has a number of highly respected, strong-minded women on it: Kinahan, Jane Brennan, Loretta Dignam, Niamh Lunny and Sheelagh O’Neill. I am not suggesting gender equality should be of concern only to the women members of the board, but it would be astonishing if these women were not particularly uneasy about a programme explicitly about the “nation” that so steadfastly excluded women.

So what happened? Did the board have oversight of the Waking the Nation programme or did it not? And if not, why not? No one would argue that the Abbey should return to the days when boards interfered with the artistic director’s choices about what to stage. But the role of a board is to set down broad policy guidelines, and gender equality is the kind of issue that any public board should have a policy on. That a board member such as Kinahan has to go on the news to complain about her own theatre suggests that something is deeply amiss in the corporate governance of the institution.

2 Why did Minister for Arts Heather Humphreys and her officials give the Abbey €500,000 for Waking the Nation without noticing that the programme had a fundamental problem?

In Friday’s Irish Times Laurence Mackin revealed that the Abbey applied to the Arts Council for funding for its Waking the Nation, after a call in May for centenary-project submissions. This competition was judged by a panel of distinguished international and Irish experts. They chose not to fund the Abbey’s proposal. This is good governance: open, transparent, independent decision-making about the use of public money.

But what happened next is an example of all that’s wrong with governance in Ireland. Fiach Mac Conghail asked the Department of Arts, Heritage and the Gaeltacht directly for €500,000 to support what he and the Abbey now acknowledge to be a deeply flawed project. And they got the money. How? On the basis, apparently, of a few good chats: “verbal discussions between the director and senior officials over a period of months” is how the department put it. Astonishingly, the department admits that at no point did it seek to discover what the money would actually fund. The discussions were about the scale of the project, not its content. This is an appalling way to use public money and should be investigated by the Comptroller and Auditor General.

3 Did anyone ever ask the Abbey for its gender policy?

The Abbey is far and away the best-funded arts organisation in Ireland, the flagship for all the rest. One might have thought that at some stage its primary funder, the Arts Council, might have asked to see its policy on gender equality, or even on equality in general, as an employer and as an expression of national values. But apparently it didn’t.

In its properly contrite statement on Thursday the Abbey board promised to “work with the director and new incoming directors to develop a comprehensive policy and detailed plan to help address gender equality”. That it doesn’t have a “detailed plan” for gender equality is obvious, but the statement also implicitly admits that it doesn’t even have a broad statement of policy. Again, this is bad governance on the Abbey’s part, but it is also unacceptable that the Arts Council has never, in all its reviews of the Abbey, got around to asking it to put on paper its recognition of its duty to uphold equality.