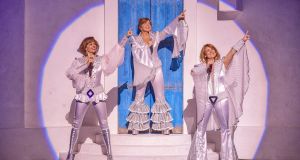 Class is having a moment in the Irish arts. The Children of the Nation: An Anthology of Working People’s Poetry from Contemporary Ireland, edited by Jenny Farrell, provides a poetic snapshot of life on the margins; Kit de Waal’s Common People: An Anthology of Working-Class Writers highlights the work of writers such as Lisa McInerney in illuminating a world rich in its own traditions.

Leading the way on the theatrical front is the work of the Breadline Collective, who have given a platform to writer Thommas Kane Byrne to tell the stories of the youth of inner-city Dublin. The 2017 drama Say Nothin’ to No One used gangland crime as a backdrop for exploring intergenerational relationships. In last year’s The Fattest Dancer at St Bernadette’s, a group of young dancers with serious attitude participated in a stage school send-up that probed gender identity as well.

In Well That’s What I Heard, which is revived this week at Project Arts Centre for a week-long run, Kane Byrne brings us back to the schoolyard, where best buds and sometime enemies Zara, Kelis and Amber have to navigate a complex social hierarchy where class has a different meaning. However, the classroom is nothing compared to the virtual playground, where the girls are stripped of all their self-esteem. Kane Byrne directs Ciara Ivie, Ericka Roe and Emily Perrott as the foul-mouthed, fragile schoolyard stars in this searing portrait of youth culture corrupted in the digital age.

Is Mamma Mia!, Judy Craymer’s theatrical presentation of the ABBA backlist, still playing more than 20 years after its debut? You bet it is! Catherine Johnson’s story, shaped around the Swedish quartet’s most famous songs, has all the hallmarks of Hollywood romance (and, of course, it was filmed in 2008 with Meryl Streep and Pierce Brosnan in the leading roles).

Sophie is due to be married, but her father’s identity is unknown to her, and when she whittles the potential suspects down to three, she opens old wounds and rekindles old flames. Before she knows it, her own wedding recedes into the background of a more compelling romance. SOS.

The idyllic Greek island setting is just the tonic for bleak winter nights, while even the most melancholy tracks (Slipping Through My Fingers) hold an infectious, upbeat energy. There’s a reason why ABBA were one of the most successful bands in pop music history. Irish West End star Sharon Sexton takes the lead role for this international touring production at the Bord Gáis Energy Theatre, and director Phillida Lloyd and choreographer Anthony Van Laast encourage audience participation throughout; expect Christmas parties and family mobs seeking an alternative to domestic karaoke.