Declan Conlon: ‘There’s not much pleasure in playing people who are content’

The actor likes to find the conflict in characters, making Tom Murphy’s plays ideal vehicles for his talents 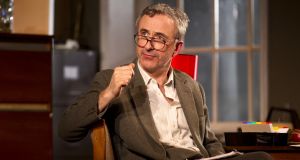 Declan Conlon: the actor excels at portraying characters who are less than entirely upstanding

The shabby office of JPW King, the only practising “dynamatologist” in Dublin (and perhaps the world) is once again open for business. It is unlikely to see a new spike in clients.

Alcoholic, dishevelled, dishonest and far from home, JPW can barely apply his doctrine of “self-realisation” to himself, never mind his his sole client, a depressive Irish property developer determined to sing like the Italian tenor, Beniamino Gigli.

For Declan Conlon, who plays JPW as a frazzled and fast-talking Englishman, the return of Tom Murphy’s brilliant play The Gigli Concert, in an accomplished production directed by David Grindley, is a chance to make new discoveries.

“You hear lines differently,” Conlon says on an afternoon break from rehearsals. “It’s a great pleasure coming back to things. Especially Tom’s work. It really benefits from being revisited. I suppose the great ones always would.”

Stage-acting, as Conlon’s conversation makes clear, is both an art and a career that depend on the moment. “Every change in intonation changes the character. It’s not worked out in advance. It’s a very organic thing. Even as you’re saying things on stage, in that moment things come out of your mouth differently, nightly, which is a great pleasure,” he says.

Phlegmatic in person, with still grey eyes and a voice as smooth as molasses, Conlon has been the go-to leading man of Irish theatre for more than a decade now, a fixture at the Abbey and increasingly the Gate. His commanding height, high brow and cleft chin are almost standard-issue handsome, but look a little closer and you see that he excels at portraying characters who are less than entirely upstanding.

In the outwardly proper figures of Michael in Tom Murphy’s A Whistle in the Dark or Christy in The House, John Proctor in Arthur Miller’s The Crucible, Jean in Frank McGuinness’s version of August Strindberg’s Miss Julie, or Ian, an ex-paramilitary in Owen McCafferty’s Quietly, he has found struggles and deficiencies seeping out from towers of self-justification.

In more oleaginous characters, such as his fascinatingly precious Peter in Murphy’s The Last Days of a Reluctant Tyrant or the cunning libertine Brack in Mark O’Rowe’s recent version of Henrik Ibsen’s Hedda Gabler, he has delivered performances of hypocrisy and venality to relish.

“I enjoy when a role or a play gives you a complicated psychological journey through it, where the role is complex enough so that different actors, making different choices, will result in very different performances of the same character. There’s a great freedom in that.”

Conlon tends to avoid any repeatable method in undertaking a role (he prefers a “magpie” approach: whatever works) but he likes to make a list of personal similarities and differences.

The other reward is in finding the rhythm of a character, something Conlon will trace in words and motion, paying strict attention to even the punctuation in Murphy’s texts, for instance. Conlon speaks of rhythm so frequently, and music is so crucial to Murphy’s play, that I wonder what he’s listening to these days. “Fela Kuti, ” he says. “I adore him. The band is so tight. It’s extraordinary stuff. It feels improvisational, but it’s so, so specific.”

There is something germane in that, the solid underpinnings of percussion and funk that allow for the improvisation of horns and jazz – a discipline that makes room for play. “That’s the beauty of theatre in a way: the repetition of it is not repetition, it’s a nightly journey you go on. What demands the greatest courage is not to anticipate what’s about to come out of your mouth. You’re almost trying to keep your mind as blank as possible and then running the risk of losing your line, your place or where you are in it,” Conlon says.

He doesn’t even like to run lines before a performance for fear it will bed in a particular reading. I think of another of his fine performances, as Heisenberg in Michael Frayn’s Copenhagen, describing the reflex of skiing: “Decisions make themselves when you’re coming downhill at 70 kilometres an hour. Suddenly there’s the edge of nothingness in front of you. Swerve left? Swerve right? Or think about it and die?”

It took a while for Conlon to locate the necessary discipline for his profession. He recalls being kicked out of the Trinity acting course three times and pleading to be readmitted. The legendarily fierce course instructor, Michael Joyce, may not have suited Conlon’s temperament, but he now recalls Joyce’s mantra as something instructive: “Don’t join the conspiracy of mediocrity.” Conlon tends to be self-critical, avoids giving plummy platitudes to his colleagues and cultivates equally unvarnished feedback from those he trusts.

One of the first lines in The Gigli Concert is almost a prayer, as JPW looks out his window and says: “Christ, how am I going to get through today?” The last time I saw Conlon deliver the words it was with a faint smile and broken sweetness, somewhere between resignation and hope. (That, of course, may be subject to change.)

“Here we go again,” Conlon says, as he returns to rehearsals, with a philosophy befitting his character, and perhaps his profession, anticipating as little as possible while staying ready for anything. The Gigli Concert is at the Gate Theatre until November 21