Sex in the digital age: Are consent apps the answer? 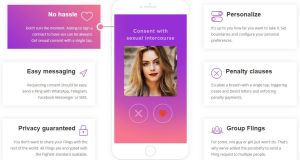 A screen grab from the website of consent app Legal Fling which proclaims to create a ‘live contract’ for sexual activity.

Consent has become a hot topic not just in Ireland but internationally. Alarming studies on the scale of sexual assaults on US university campuses has led to a shift within sex education towards “yes means yes” rather than “no means no”.

The promotion of affirmative consent – giving clear and ongoing approval for any sexual activity – raises the prospect of new types of conversations.

How exactly is consent given? And how how you know, to a legal standard, that you’ve received consent?

Inevitably, technological solutions have been proposed. In particular, several apps have been developed aimed at young people, which allow users to record signals of consent to sex.

“These signals can come in different forms, including text messages and short video recordings,” explains John Danaher, a law lecturer at NUI Galway with an interest in emerging technologies. “Some apps also allow users to record signals of non-consent or withdrawal of consent, and some try to educate users about the nature of sexual consent.”

The latest such consent app Legal Fling proclaims to produce a “legally binding agreement” through the users’ participation, albeit the company says: “To which extent the contract holds up in court depends on your country of residence.”

Moreover, the company admits under its frequently-asked-questions for users that the “live contract” does not prove consent beyond reasonable doubt. “It has its limitations in case one of the parties blatantly lies.”

Could the use of consent apps become a normal part of dating? Or are they the latest example of solutionism – the Silicon Valley philosophy that there’s a technological fix for every human fault?

This week’s Unthinkable guest, Danaher leans towards the latter view. He says, “the idea that apps can somehow solve the problem of sexual assault seems pretty far-fetched to me”.

What consent apps have been developed to date?

“There are four that I am aware of. The first was called Good2Go, and it was launched in September 2014. It allowed users to signal and record consent via text messages (“I’m Good 2 Go”). This app didn’t last long as Apple refused to sell it in the App Store.

“Good2Go was followed in 2015 by the We-Consent app suite. This, as the name suggests, is a whole set of apps, including one for video recording ‘Yes’, one for ‘no’, and another for recording details of a sexual assault (the ‘I’ve been violated app’).

“The SaSie app was launched in 2016 and gets its users to sign a ‘contract’ in which they agree to abide by affirmative consent standards in their relationship. The app-makers describe it as being like a ‘prenup’ for a sexual relationship. The legal status of this ‘contract’ is, I think, questionable.

“Finally, the most recent entry into the market is an app called Legal Fling which is somewhat similar to Good2Go in adopting a text-messaging format, but includes more options and allows users to set boundaries on the kinds of sexual activity they are willing to engage in. Legal Fling also has the novelty of using blockchain technology to encrypt and store the information.”

What are the problems with them?

“There are several. I’ll just mention three. First, I think the apps make a fundamental error about communication. The meaning of any communicative act depends not only on its semantic content but also on the broader context in which it was performed, i.e. what was said before, what is happening to the person saying it (something linguists call ‘pragmatics’).

“An utterance like ‘Yes, I will have sex with you’ looks like it has a clear and unambiguous meaning, but takes on a very different guise if we learn that immediately beforehand the person was asked ‘What is the least likely thing you will say this evening?’ or if we learn that they were being threatened at the time.

There is a gendered aspect to these apps; they largely play into fears of false accusation among men.

“The main problem I have with consent apps is that they produce signals of consent that are shorn of this broader context and so are of questionable evidentiary value. Now, a proponent of the apps, could argue that it is not impossible to add some of this context back in by eliciting testimony from the parties involved, but this is where we encounter the second problem.

“I would worry that the signals recorded by the apps would be afforded excessive weight in any inquiry into an alleged sexual assault/rape. These inquiries are already beset by epistemic problems: most sexual assaults occur in private and inquiries into them depend on duelling testimonies (the “he said-she said” dynamic).

“I think there is a danger that even if something in the broader context called into question the validity of the recorded signal of consent, it would be discounted in favour of the recording. The recording will be the one solid bit of evidence that cannot be doubted.

“This then leads to a third problem. In any case in which a prior signal of consent has been recorded, there is a danger that if one of the parties changes their mind, they will feel unable to back out. This is already a problem – prior consent is still often taken to demonstrate continuing consent – but I think it would be exacerbated by the existence of a recording.

“Many of the apps described pay lip service to the idea that consent can be withdrawn, and at least one of them tries to enable someone to record that withdrawal, but we have to question how practically and psychologically feasible that would really be in the midst of a sexual assault.

“It’s also worth mentioning that there is a gendered aspect to these apps. As other commentators have pointed out, they largely play into fears of false accusation among men.”

Could these problems be overcome with more advanced apps, or other technological interventions?

“I’m sceptical. You could imagine tweaks that address some of the problems outlined above (e.g. more complete recordings could address the decontextualisation problem) but this would come with other costs (I’m not sure how many people would be comfortable with this). There could, however, be value to educational apps that don’t provide any recording function.

“The other problems with proving consent/non-consent are likely to be better addressed by providing clearer legal definitions of consent and perhaps by introducing evidentiary presumptions of non-consent – as is done in England and Wales.”

You’ve pointed out that such apps can impinge on sexual privacy. Is sexual privacy something we may have to surrender in future to create a safer environment? A case could be made, for example, for CCTV to become ubiquitous so that all sexual encounters could be reviewed and analysed afterwards.

“All forms of privacy are under siege in the digital age. I suspect that complete recordings of all sexual encounters will seem pretty dystopian to most people - it’s satirised quite effectively in Dave Eggers’s novel The Circle - because they won’t like the idea of their being permanent video and audio records of their sexual encounters, no matter how well-encrypted they may be.

“More importantly, I don’t think complete recordings would solve the problem. There are some famous cases of sexual assault where you could have had a complete video recording of everything that happened and still have a dispute about consent.”

One ping after another: Why we all need a notification detox

A Long Petal of the Sea: Characters take back seat in story stacked with historical detail
Real news has value SUBSCRIBE