RTÉ symphony orchestra should be funded by Government, review says 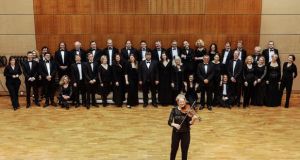 Members of the RTÉ Concert Orchestra, one of the national broadcaster’s two orchestras. Photograph: RTÉ

An RTÉ review of the national broadcaster’s two orchestras says the RTÉ National Symphony Orchestra should be funded by Government.

The report says the symphony orchestra should be established as a National Cultural Institution in its own right, or as part of the National Concert Hall.

Its main recommendation is that neither the symphony orchestra nor the RTÉ Concert Orchestra be closed, but that both should be brought up to full strength.

The review, carried out by Helen Boaden, former director of BBC Radio and BBC News, and London strategy consulting firm Mediatique, is entitled ‘Ensuring a sustainable future for RTÉ’s orchestras’.

The report states RTÉ should “contribute funding to a newly independent National Symphony Orchestra in return for the right to broadcast its performances”.

The key recommendation on the future of the broadcaster’s direct employment of musicians is that the concert orchestra should remain within the fold and that it should become “a key means of RTÉ providing support of orchestral music – live and broadcast on television, radio and online”.

This is seen as being “fully consistent” with the broadcaster’s role “as a public service media provider”.

The broadcaster’s board is to consider the report and its recommendations at a meeting later this week.

In the wider cultural context, the review quotes research which has identified “strong support among Irish audiences for the existence of RTÉ’s orchestras, and for public funding to ensure their provision”.

It also says that “widespread support for the retention of both orchestras also exists across the orchestral music sector and within Government”.

It acknowledges the fact that the broadcaster’s orchestras “now have significant vacancies and have been obliged to reduce commitments to touring and educational roles”, and it notes that “morale has suffered as a result”.

The report’s view on the status quo is not optimistic.

It finds it “hard to see how RTÉ can fund even the current level of provision, let alone cover the increase to budgets that would be required for the orchestras to return to full strength and undertake touring and education programmes”.

At the same time it sees its proposed solution as being “consistent with the Government’s own policies around promoting cultural Ireland (including refurbishment of the National Concert Hall)” and says it “provides both orchestras with the opportunity to establish and promote a fresh cultural vision”.

Among the other conclusions reached in the review is that “Ireland’s orchestral scene is very stretched compared to other European countries, most of which host multiple publicly funded and private symphony orchestras.”

It also says that “not only is the country as a whole under-served, the RTÉ NSO [National Symphony Orchestra] is smaller and performs fewer concerts than its European PSB [Public Service Broadcaster] counterparts”.

And it also places Ireland worst in a table of orchestral provision in 27 European countries.

Meanwhile, the Minister for Culture Josepha Madigan and Minister for Communications Denis Naughton have welcomed the publication of the report.

The Ministers said they welcomed the recommendations in the report, in particular the recommendation that the symphony orchestra should be a national cultural institution in its own right or within the National Concert Hall.

In their statement, the Ministers said the report also stated that the concert orchestra should remain with RTÉ, “functioning as a classic radio orchestra”, while the importance of maintaining a strong connection between both orchestras was also recognised.

“I believe it is important that there is strong provision of orchestral music in Ireland and this report allows us to chart a way forward for both orchestras - securing a strong future and ensuring that they can contribute fully to Ireland’s rich cultural heritage,” Ms Madigan said.

“The report is also timely - the Government’s Creative Ireland programme commits to a range of important initiatives to support culture and creativity in Ireland, and our 10 year National Development Plan, envisages major capital investment in our National Cultural Institutions, including a major re-development of the National Concert Hall.

“The National Concert Hall since it opened has been the home of the National Symphony Orchestra which provides the backbone to the Hall’s orchestral music programme. There is now an opportunity for the NSO to play an even stronger role as part of these wider developments.”

Mr Naughten said: “I welcome the recognition by the report of the desirability of a renewed focus on the educational role of the orchestras and the importance of serving regional audiences. In conjunction with the Minister for Culture, Heritage and the Gaeltacht, I am looking forward to advancing the recommendations of the report.”

The Ministers have requested officials from their Departments to engage with RTÉ with a view to bringing forward proposals to address the recommendations as a matter of priority, their statement concluded.

Meanwhile, Fergus Sheil, artistic director of Irish National Opera, agreed with the acknowledgment that Ireland is at the bottom of the league table for orchestras per population, the general agreement about their importance for wider society, and that they should be funded.

He said the decrease in orchestral funding over the past 10 years - with a reduction in player numbers, regional performances and education performances, and low morale - is stark, he said. “And with the best will in world, I don’t think the situation is going to improve for RTÉ.”

The obvious way out, the best outcome in the interest in protecting the orchestras, said Sheil, “is for the NSO to stand on its own two feet, and have its own board. It would be better placed and could flourish in a way it can’t with reduced funding. The economy is supposed to be booming, we’ve had two orchestras since 1948. This is not the moment to be shutting orchestras.”

Graham Macken, Musicians Union of Ireland (MUI) organiser, welcomed the recognition of the importance of the orchestras in our culture and identity, and the endorsement of both orchestra. He noted the report was commissioned by RTÉ management with no input from unions, and is concerned at the suggestion that NSO would become a separate entity outside RTÉ. “There is an obligation on RTÉ under the Broadcasting Act to establish orchestras - plural. To give up the NSO would be a breach of its obligations,” and the Act would need to be amended or rewritten, which would take time.

The MUI is against any removal of the NSO from RTÉ, he says, and it would be better to channel any increase in NSO funding from outside, perhaps from licence fee reform or a grant, through RTÉ, rather than move it outside the broadcaster.

He described the proposal as “rearranging the deckchairs”.

Aiveen Kearney, head of school at CIT Cork School of Music said it strongly supports the recommendations to create a properly funded independent symphony orchestra that is a national cultural institution, and to maintain a full-strength broadcasting orchestra as part of RTÉ. “The alternative recommendation, involving the closure of one of the orchestras would be unacceptable and untenable. The RTÉ orchestras are the pinnacle for many of our graduates in terms of their professional career ambitions.”