Pope comes to Ireland: Here's our ready-made nostalgic article full of gems about the 1979 visit

Want cultural references and a killer payoff? I am here to help you 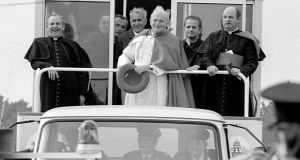 Pope John Paul II’s visit to Galway in 1979. That experience confirmed your isolation from the church and propelled you towards a life resisting the establishment.

Greetings, older columnists. The Holy Father will be here sooner than you think. There are only two months to go before editors demand nostalgic pieces describing our experiences during Pope John Paul II’s visit in 1979. If you’re lucky, the paper may even run a photograph of an acne-ridden you wearing Feargal Sharkey’s parka beside the cross in Phoenix Park.

It’s never too early to sketch out a plan. I am here to help. I saw the pope in Limerick – his helicopter arrived late – and can offer neat structure, contemporaneous cultural references and a killer payoff that makes you the real hero.

You’ll want to begin with a paragraph pointing out that “Ireland was a very different country in 1979”. Don’t worry if you’d never been anywhere closer to Northern Ireland than Dublin Airport. A few phrases about “ongoing sectarian divides” in “a dispute that seemed intractable” will give the impression you were paying attention.

If you are from outside Dublin, mention that you had only just got a second TV channel. Shows worth referencing include Mork & Mindy, Dallas and WKRP in Cincinnati. If you’ve space, point out that, unlike Dubliners, you never saw Happy Days as RTÉ didn’t take it.

Current hit records included Message in a Bottle by The Police, Dreaming by Blondie and Cars by Gary Numan. Never mind that. Here’s the anecdote you really need. As the pope touched down, Catriona Walsh, a sometime member of the New Seekers, was at number one with Viva Il Papa. It seems that a blameless Catriona was omitted from the welcoming committee following allegations that the chart had been fixed. This story (about which I can remember absolutely nothing) will allow scope for sardonic remarks about how such relatively innocent forms of corruption then shielded the true crooks from attention. You know the sorts of things I mean. There are easily 400 words there.

When you address your family’s visit to the big Mass, make sure to explain how much it meant to an older relative. You can reference priests hammering you with belt buckles later on, but it’s important to pretend that you’re a big-hearted fellow who, though sceptical about all organised religion, respects the pure faith of those raised in a simpler era.

It doesn’t matter how patronising you get. People will tolerate any amount of this guff if it’s delivered with the lachrymose insincerity of a Victorian balladeer. “As the helicopter swept in over the million heads – weaving like ears of Christian corn – Auntie Maureen craned her neck and blinked away tears that could hardly have been more torrential if she were greeting the risen Lord himself.” You can have that one for free.

The Americans got John, Paul, George and Ringo, we got just John Paul

If you’re rural you will probably write some baloney about how, in the summer before the pope arrived, you spent the sun-dappled evening gambolling among squirrels, badgers and… Oh, I don’t know, some bird or other. Don’t ask me. Ask Laurie Lee or Gerard Manley Hopkins. I can’t stand nature.

If you’re from the city, you will have been kicking footballs down dusty alleyways until the call for teatime echoed across the cobblestones. This stuff is easy. But it is important to stress the relative simplicity of the era and the comparative dearth of entertainment options. This provides a platform for musings on how the sheer hugeness of the visit excited even cynical teenagers such as yourself. “Our windswept Atlantic backwater had, for millennia, been hidden behind a range of indifference,” you write. “For one weekend, it felt as if the world’s eyes were upon us. Who cared why?”

Somewhere in here you might want to make a facetious comparison with Woodstock. Had The Beatles been at that festival, you could have tried: “The Americans got John, Paul, George and Ringo, we got just John Paul.” Sadly that won’t work. Settle for “something, something… Jimi Hendrix offering a secular communion… blah, blah… no lavatories at either event.” I can’t do all the work for you.

All this should lead towards a personal epiphany while watching the now-baffling “youth Mass” in Galway. This will work best if you pretend to have actually been there, but, if too many people are still around to call you a liar, you can own up to watching it on the telly. You listen bewildered as your contemporaries cheer the pope’s catchphrase: “Young people of Ireland, I love you.” The blind acquiescence disturbs you. You realise that you are from a different Ireland – the Ireland of non-conformity, singular thinking and distrust of authority.

That experience confirmed your isolation from the church and propelled you towards a life resisting the establishment. Eventually, you and the rest of the greatest generation transformed Ireland. And it all started with the pope’s visit.

I hope this has been helpful.