The marriage seems okay. But ‘The Affair’ needs spicing up

We thought it was over between us, but Sky Atlantic has rekindled its infidelity drama

Trailer for the fourth series of Sky Atlantic drama, The Affair. 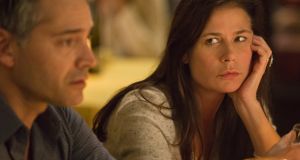 The Affair: The irrational, compromising, downright delusional qualities of desire will always be riveting to watch

It’s worrying enough when passion starts to seep out of a marriage; so how concerned should we be when people feel the need to spice up an affair? Something like that appears to be happening with Sarah Treem and Hagai Levi’s arresting drama of desire, betrayal and competing perspectives, The Affair (Sky Atlantic, Tuesday, 9.30pm).

Coming to a rather satisfying, seemingly definite conclusion at the end of season three, in which a shattered family was reunited, minus the father who shattered it, it had seemed like we had reached the end of The Affair.

Now, however, it has been rekindled.

The heart of any self-respecting viewer should always sink when, following an introductory snippet of crisis – a gunshot that finds its target, say, a midnight raid, or, in this case, two long-time foes glowering over reports of an unnamed missing person – the legend flashes up: “Six weeks earlier”.

Fans of The Affair will point out that it has always had a retrospective charge, but the device is so faddish and overused you feel like going back to your first love: chronology.

The Affair’s first season was framed as a murder investigation, in which the extramarital romance between Dominic West’s unfulfilled novelist, Noah, and Ruth Wilson’s opaque waitress, Alison, is recalled and revised from the characters’ perspectives. As with Maura Tierney’s excellent Helen and Joshua Jackson’s sympathetic Cole, sometimes these stories corresponded, but mostly they subtly contradicted. Nothing seemed as roundly betrayed as the truth.

That device, to recount scenes through character perspective, is still rewarding to watch. Now the Soloman family and dishy doctor Vic (Omar Metwally), have left New York to live in California (about as big an infidelity as you can imagine), and Noah has followed to teach in a public high school.

The fillip of the show isn’t that his memories are selective and self-serving, but that you forget it, grunting alongside him when he is cut off in Santa Monica traffic, seething at Helen and Vic’s stony-faced responses to shutting him out of a parents’ event in school, swallowing his indignities and nursing his grievances. All of this is contradicted by Helen’s chapter.

Helen, however, is hardly any more reliable; now full of foreboding, imagining earthquakes rumbling around her, and so enraptured by a sylphic valley girl (Emily Browning) – who airily asks, “Did you ever try goat yoga? Oh, my god. It’s yoga but with baby goats. They massage you with their little hooves”– that it’s obvious who the next adulterer will be.

As with novels, these rivalling points of view put you directly inside a character’s head, still a rarity for television. Giving each of its main characters the space to share the story as they see it, moreover, has an absorbingly empathetic quality: to understand all is to forgive all.

The advertised plot twist, six weeks from now, or whenever, will doubtless be trailed across successive episodes. But the overlapping perspectives of credible characters is still The Affair’s most irresistible hook. Just as the irrational, compromising, downright delusional qualities of desire will always be riveting to watch.

On that point, at least, everyone can agree.

Inside Ryanair: Michael O’Leary’s making of a ‘nicer’ airline