Peter Fallon: the man who brought jazz and pizzazz to Irish poetry

A new collection of essays and poems celebrates poet and editor Peter Fallon. In his contribution, the late Dennis O’Driscoll describes the man who was his ‘first poet’ 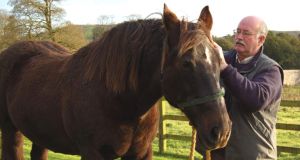 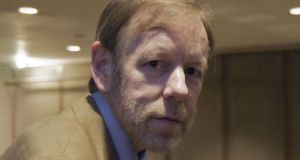 Peter Fallon was my first poet – the first I met, the first I heard read poems in public. When I moved to Dublin in 1970, unlettered in the ways of the poetry world, Peter (barely three years my elder) was already well on his way to becoming a man of letters. He was rejuvenating and regenerating the art, dusting it off, stirring it up with the whirlwind stamina of a young Yeats or Pound.

His dashing dress code and exuberant spillage of ink-black hair lent him an aura that was as mystical as it was modish. Peter’s energising omnipresence lit a neon torch for a generation that had had its fill of staidness and – appetite freshly whetted by Lunch Poems and Howl, by the Beat school and the Liverpool Poets – was hungry for an Irish poetry with more pizzazz, more jazz, one likelier to appeal to the metalhead music fan than the egghead academic. He expanded Ireland’s poetry constituency, making the art accessible to an audience that had felt excluded from this “elitist” pursuit.

For all his associations with pop poetry and Beat poetry, Peter’s poems were neither flared nor tie-dyed. Solitary is the final word in his accomplished first collection, Among the Walls (1971), and the book as a whole – containing poems written for the page rather than performance – is the work of a poet seriously committed to his art.

That his dedication had yielded early dividends was evident by the time his third collection, The First Affair (1974), appeared, its taut, well-crafted poems flourishing both in performance and in print. The development in his work, over so short a period, was as startling as it was impressive. Still only 23, he had found his true voice and his true subject matter had found him.


The move to Meath
Fallon’s life-changing decision, in the 1980s, to transplant The Gallery Press (which he started “in innocence” in 1970) from suburban Rathgar in Dublin to rural Co Meath was audacious. Finding his place there, he is happy to explore, if not explain, local lore and legend. He can be simultaneously respectful and ironical towards folk cures:


my mother would cross
a sty in your eye

and if that didn’t cure it
it wasn’t a sty.

Mole, one of the pair of Fallon poems selected by Seamus Heaney for his anthology Soundings 2 (1974), heralds the splendid imagist to come: “Thalidomide, earth-seal / of muscle, tail a teat / and nose the sound of stone . . .”

Residence in a Loughcrew landscape of passage graves has heightened his sense of what “time” means in that “test of time’ to which all poetry is subjected. The rhythm must be right, the structure watertight, the evocation exact, the metaphor striking, the emotion true.

No doubt Fallon was glad to have escaped the daily eye-contact and street-corner contact with would-be authors. But, apart from the practical benefits a tranquil and isolated poetry place and publishing base would confer, Fallon’s agenda entailed deeper aspirations: “. . . some credible version of a life, and some exciting and memorable expression of that version”.

Such a life would be marked by responsible husbandry of land, neighbourly co- operation, dedication to the art and craft of poetry, and – as editor and publisher – high editorial and production values. His ultimate hope is that both his smallholding and the art of poetry will be the better for his endeavours: “The work and the life at the end of the day both add up to some kind of love affair with a particular place.”

In a 1983 interview with Ciaran Carty, Fallon spoke anxiously of the pressures that now beset communities: “There’s been a breakdown in the individual and a breakdown in the community. There’s this sense of people coming apart and not knowing their place any more, and not knowing where they fit into the scheme of things; a sense of not having a relationship to a way of life and not having anything to be responsible for . . . Agriculture is changing from being an art to a science. It’s turning into just another business.”

Fallon celebrates his way of life, yet crucial to the success of Fallon’s celebratory style is his refusal to sentimentalise farming life. Some of his best poems contain graphic depictions of physical work – dipping sheep, performing a Caesarean on a ewe, spraying potatoes, saving hay, harvesting grain, foddering cattle (“He is stuck in the mud of four weeks’ rain / backing a tractor through a gap”). Although ever-tender towards his “care”, he leaves the reader under no illusion about the crueller side of farm life.

The light and humorous touch evident in Winter Work is even more pronounced in the poems where he draws on the colourful words, cunning wisecracks and droll locutions that distinguish rural speech: the banter of drinking pals, the repartee of neighbours, the earthy ripostes of those who toil and till.

His recreation, in The Late Country, of a Garda raid on a huddle of after-hours drinkers would make for an hilarious stage scene:

and noted men muttering in Irish
and forgetting their addresses,
observed the clumsy pantomime
of men with drink taken standing
straight upright, blinded by the light.
‘Have you any idea of the time?’

‘I suppose it’s late.’
And the guard we knew loomed
in battle dress beside us like the Prince
of Darkness. ‘I’m surprised at you.
I thought you knew better . . .’ ‘You’re
surprised? Sure I thought I left ages

Only someone who is an outsider as well as insider, someone capable of artistic detachment and attentiveness, could reproduce so vividly what the rest of this drinking fraternity would take for granted.

Fallon himself acknowledges the inevitable gap between him and his neighbours when he writes, regarding his bilingual life in Co Meath: “I re-learned, or remembered, the language which surrounded me when I was a boy. I knew again a vocabulary and idiom belonging to the way of life in a local community. But by this time I had been schooled in another language – of literature and the academy.”


Dark side of rural life
His poems revealing the darker side of local life – shootings, incest, a dumped baby – exacted a heavy price, jeopardising his faith in community solidarity by separating him from neighbours. In courageously discharging the poet’s truth-telling role, and refusing to yield to self-censorship, Fallon was abruptly reminded of how readily small communities will close ranks, and collude in conspiracies of silence.

Fallon’s own patriotism is literally a love of the land. Builders of a nation, not its wreckers, earn his admiration; his roll of honour includes those (“their sovereign thought was Ireland”) who “fought the Black and Tans / and wintered in damp ditches” in the early 20th century: “Without their kind there’d not be / a Republic.” His disillusionment at how that Republic has betrayed its hard-won inheritance is encapsulated in his 1994 poem, St Oliver’s.

One sometimes fears that Peter possesses a rarer, more generous tendency: that of taking so much interest in the poetry of others that he may neglect his own. Reassuringly, however, inspiration continues to flow from some deep subterranean source in the midnight oil wells of megalithic Meath, and is refined into high-octane poetry.

The abiding note of Peter’s work is the celebratory one. To cite the jacket text of The Company of Horses, his “life-affirming lyrics” celebrate “the blessings of the whole green force of nature”: “There are hymns to family and friends, to the majesty of trees and other living creatures.” His Gallery Press work, too, has been undertaken (in partnership with Jean) in the most salutary possible spirit: “From the beginning, the impulse was praise, and it still is. My understanding of publishing is praising.”

Forty years after our first encounter, Peter’s devotion to poetry is as unflagging as ever, and his sense of humour just as wicked. Daylight Robbery is a misty, mystical, mischievous four-liner:


This is an edited extract from Dennis O’Driscoll’s essay in Peter Fallon: Poet, Publisher, Editor and Translator, edited by Richard Rankin Russell and published by Irish Academic Press, which also features Medbh McGuckian’s poem (below)

ON CUTTING ONE’S FINGER WHILE REACHING FOR JASMINE

She talked about the aboutness of life, the eternal
False illumination of the leftover nights, her lavender-
Skirted self who paced around the tousled
Bedroom, the otherwise good you.


She incessantly made 0s, 0s of all sizes,
0s inside one another, always drawn backwards
In lilac ink by her beckoning finger,
On fine paper, gilded and musked.


Ramrod straight in her harp-backed
Horse-grey chair, she beheld the most beauteous
Scrawl of the same love as never
Floated to the house as if rain water


Captured in the water-whipped square
From thundering icequakes and the smaller
Curves of a river missing its valley
Were the one place a flying creature could feel safe.

U2: All That You Can’t Leave Behind (20th Anniversary Edition) review – A timely reminder of their firepower

Precious time with a parent during Covid-19
9

Relic: The creepiest horror movie of the year
10