Patrick Freyne: Television that makes me Glow with happiness 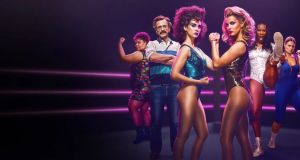 ‘Glow’: No-one has ever said “let’s try and cash in on the lucrative retro women’s wrestling market”. But it works.

Here are the television programmes that have recently been bringing me joy.

Once I would have dismissed this larger-than-life Batman prequel as inferior to grittier dramas such as The Wire or The Sopranos. Since those early days of prestige television, however, the old certainties have failed us. Nowadays The Penguin, The Riddler, Mr Freeze and Hugo Strange’s plans to swindle, riddle, freeze and mutate the citizens of Gotham seem like interesting policy suggestions. You’d call them moderates now, I think.

Ben McKenzie plays the future Commissioner Gordon and teenage David Mazouz is brilliant as the future Batman. Both are, essentially, straight men to the rest of Gotham City, a retro gothic metropolis with terrible public services, rotary dial telephones and the most delightful collection of oddballs, goons and supervillains this side of the DUP. In short, if you like your scenery to be riddled with bite marks you will love this programme. Weird, witty, clever Gotham is the best fun I’ve had watching television in years.

The first series of Glow involved a diverse rag-tag band of eccentric women (including Alison Brie and Betty Gilpin) and one man (Marc Maron, the curmudgeon’s curmudgeon) putting together a wrestling show in the 1980s. This is very niche subject matter. No-one has ever said “let’s try and cash in on the lucrative retro women’s wrestling market”. But it’s colourful, funny, feminist and sweet and it’s coming back to Netflix in a few weeks.

If you’d like a nice cathartic cry, watch Netflix’s updated version of the noughties classic Queer Eye for the Straight Guy. In each episode, five highly-empathic gay men shepherd a well-meaning but vulnerable schlub through much needed emotional, physical and sartorial self-development. It me, says you.

As social policies go, assigning five charismatic gay gurus to every struggling straight man might be expensive (I think there’s a White Paper doing the rounds) but if this programme is anything to go by, it would end the crisis of masculinity (see: Top Gear). Of course, there’s also a danger that a generation of anxiety-laden straight guys are going to start washing up at the doors of the George instead of going to psychotherapy. Let’s cross that bridge when we come to it. In the meantime, I daydream that I’m on it and that they convince me to be more emotionally open, change my diet and stop dressing like a goddamned fool.

“Hold on,” says my wife. “I try and convince you to do these things all the time.”

“But I want them to be my frieeeends!” I wail, like a distressed baby, proving how much I need to be on the show.

There’s a whole subgenre of ITV crime dramas in which rural England is actually a violent killing field yet is still, somehow, very quaint and picturesque and worth a visit (Brexit Britain, eh?). Endeavour is the best of the lot. A beautifully-filmed prequel to Inspector Morse, each episode features the boyish, lonely, opera-loving detective, detecting class-conscious murderers in and around 1960s Oxford with his big sad puppydog eyes and doomed attraction to cold and troublesome beauties. “But I want him to be my frieeeend!” says my wife, presumably because she needs some crime investigated.

Is it wrong that I find this perfect six-part Netflix documentary about a bizarre Indian guru and his mad cult building a city in rural Oregon in the 1980s a little inspiring? It’s to the credit of the even-handed film-makers that by the halfway mark I was thinking: “They may have drugged vulnerable people, tried to rig local elections and attempted a few murders (the key word here, legally, is attempted) but I like their fetching orange robes and dance parties.” Yes, it’s very easy to snipe from the sidelines but where’s your settlement of manic cult followers? Sorry, I got distracted. Wild Wild Country is an excellently-paced real crime documentary with exactly the right amount of episodes.

Watching the news about police brutality in America you might think that Brooklyn Nine-Nine’s cast of racially diverse, politically woke, sexually-fluid police detectives should be filed under science-fiction rather than crime-comedy. Still, its warm, silly, characterful plotlines regularly make me squeal with joy and want to be a policeman, which would be a terrible idea for everyone because, as you know, I quite like crime. The recent news that Fox had cancelled the series was followed by an outcry and it was recommissioned on NBC. It’s great.

I watch MTV Base at the weekend when I come back from meeting other middle-aged people in their well-fitted kitchens to talk about property prices and drink craft beer. In times past, I fancied I understood hip hop but absorbing MTV Base’s frenetic videos and fuzzy baselines leaves me generally feeling disoriented and giddy. I feel like elderly people must feel when toddlers are let loose in the daycentre. Don’t get me wrong, MTV Base is great and I can watch it for hours like a slack-jawed baby observing an interesting spoon. Unfortunately, I can never retain any of the information I learn while watching. So when I try to distract a fellow middle-aged person from a discussion about commuting times by dropping some MTV Base-derived knowledge I end up saying things like “You know the funny little guy with the hair? Ah, you do” or “Do you know the track that goes [insert inept beatboxing here] Ah you do.” I’ve yet to impress a young person with something I’ve learned from MTV Base or, indeed, anything.

My wife and I really relate to this animated Comedy Central show. Bob is a tired man who makes burgers and I am a tired man who makes word burgers (that’s what I call “articles”). Meanwhile, his wife Linda is a racoon-idolising woman who likes to narrate/sing things that are happening to her. “I do that too!” sing/narrates my wife. “I sing/narrate what’s happening to me!” (she goes up an octave on the “me”). And then there’s the children, Machiavellian Louise, boy-obsessed Tina, and musical id Gene. Now, while we don’t have children, if we were to kidnap some (we probably won’t), these would be the types we’d choose. Each episode of Bob’s Burgers is an explosion of warm, funny, super-real character humour. It’s probably the funniest programme on television.

I think I previously demonstrated in this column, using logic and reason, that Love Island is actually a Lust Archipelago. However, that is not to detract from its charms. The sweetly triangular hunks and contoured hunkettes romp in a prelapsarian hunk Eden, providing much-needed respite from the endless stream of “news” coming from the hellmouth (Twitter). Of course, this is reality television, so the sweetness can turn sour very quickly and may well have done by the time I finish this sentence. (Turns on television). Okay, scratch that, they’re killing and eating each other.

The Angelus (RTÉ One)

Bong! Bong! Bong! Who doesn’t like the Angelus? The reflective people staring out windows, the reminder to pray, the bongs (I may be influenced somewhat here, by the minimalist bass lines I’ve been consuming on MTV Base). Anyway, when my cat is staring pensively out the window I like to imagine she’s contemplating Jesus and I sing some “bongs” to her, which I think she appreciates. She certainly looks very holy.