The trailer for the next film in the 'Jurassic' series has arrived. Released in June 2018. 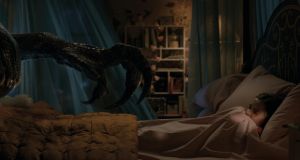 Just give me five more minutes 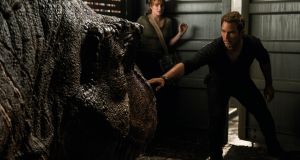 They had pondered the fossils. They had read the research. But the creatures seemed like mythical creations until humans caught first sight of them gnawing on box office tills during the Early Clintonian Epoch.

Claire is saying something here about the internal atmosphere of the Jurassic Park universe: few characters rock back in awe any more. But she’s also saying something about audience’s reactions to the movies.

The recent films may occasionally repeat the excitement of Jurassic Park’s chase sequences, but we can never recapture the moment when Laura Dern dropped jaw at the herbivores ambling to John Williams’s soaring chords. What was once magic is now commonplace.

That hardly matters to the accountants. Released in 2015, Jurassic World, despite being a cluttered mess, somehow managed to become the third highest grossing film of all time.

If anybody cares, Bayona’s film is better than that episode. Indeed, it just about clears the low bar required to qualify as second best in the whole sequence. Fallen Kingdom cracks along at a pace. It takes some mild risks in its later stages. It is amusingly self-aware without becoming clever-clever (or clever).

That reflexive character asserts itself in our very first shot of Claire.

Acknowledging the many rolled-eyes at the high-heels Claire wore during the most perilous bits of Jurassic World, Bayona photographs her feet as she fidgets in another pair of those unfriendly shoes. They are soon discarded for stout boots.

Claire is on her way to discuss plans for the proposed evacuation of the Central American island that once contained Jurassic World. A volcano has erupted and our old pal Dr Ian Malcolm – blink and you’ll miss Jeff Goldblum – is urging the authorities to allow nature to annihilate man’s dangerous mistake.

Claire and her do-gooder colleagues disagree and are soon commissioned by Eli Mills (Rafe Spall), fixer for Sir Benjamin Lockwood (James Cromwell), to rescue the dinosaurs from advancing lava.

(Any audience member who trusts the oily Mr Mills’s motives should get in touch about a landmark bridge I have to sell at an extraordinarily affordable price.)

Obviously, Claire gets back with Owen. No couple who helped a major studio to $1.6 billion will be allowed to stay apart forever.

They squabble effectively, but both actors are too nice to engender the tension that a Hawksian battle of the sexes requires. They never seem properly annoyed with one another. You never feel the joshing could develop the sort of edge that can take out an eye.

The air around the two leads is, however, hot enough to keep the film aloft. In a nod to Donald Trump, an evil character refers to one of Claire’s young colleague as a “nasty woman”.

The always-welcome Toby Jones, on form as a demonic arms dealer, arranges his hair in a fashion complicated enough for the current commander-in-chief. Meanwhile, the action powers along with a satisfying viciousness – watch out for a cracking death in the pre-credit sequence – that may alarm paler Fauntleroys in the audience.

What really sets Fallen Kingdom apart is the fascinating decision to allow Bayona, director of the spooky The Orphanage, to turn the last act into a variation on the haunted house movie. The meshing of genres doesn’t entirely work, but the sight of a dinosaur, like a reptilian vampire, entering a French window through billowing drapes is reason enough to buy a ticket.

The wonder has long gone. But there is, in such sequences, still some fun to be had. That is enough to be going on with.