One night only? Culture Night’s ambitions go much further 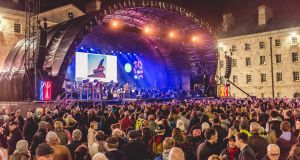 Culture Night is ‘a social opportunity to get out and enjoy the city, as well as the art, in a festival atmosphere’

For one night each September, we become a nation of culture lovers. In this parallel universe, people queue to get into museums, line up outside galleries and throng the foyers of theatres. Couples have fun without alcohol, families explore architecture, cafes turn into performance spaces, bars sprout poets and it can seem as if every square inch of the country is humming with creativity and joy.

The first Culture Night, in 2006, founded by Gráinne Millar and Una Carmody, then of the Temple Bar Cultural Trust, and inspired by Copenhagen’s Kulturnatten, was a relatively small, Dublin-only affair. Now it attracts an estimated 400,000 people, receives just over €400,000 in support from the Department of Culture and runs the length and breadth of the country.

There is an extraordinary diversity of places and spaces open, and everything is free. So the first and most obvious question is: why don’t we do it more often? Aimée van Wylick has been at the helm of Culture Night since 2013. She laughs when I ask, and outlines the huge amount of work and behind-the-scenes energy it takes: from traffic plans to volunteers, from institutional and set-piece events to the smaller spaces that, already at the pin of their collar for day-to-day happenings, pull it out of the hat each year.

Van Wylick, calm and precise in conversation, came to Ireland to study at Trinity College Dublin. She was supposed to study business but got sidetracked into the arts. “I’m half Dutch, half Serbian. I was born in Germany and grew up in Belgium,” she outlines. Her company, Boxroom Productions, also looks after the Chinese New Year Festival, the International Literature Festival Dublin and the Red Line Book Festival.

This close to Culture Night, I’m intrigued by her calmness. Is there a secret? “You get better at it,” she says. “I have definitely learned how to have out-of-office time, switch-off time.” As I wonder how to go about emulating this, she contradicts herself, telling me about a useful programme that lets you schedule emails to appear to have been sent first thing in the morning, rather than actually closer to midnight.

“The hardest part, I think it’s the juggling,” she says. “You try to keep everything in line at the same time, and stay on top of things, but it can be difficult when something is out of synch.” There’s also the more general, and unavoidable problems that afflict large events that use public spaces. Traffic management is getting harder. “It’s a family-friendly, night-time event, and people bring their kids in to town, but it’s also a Friday night, at peak commuter time in the cities, so everything is coming together.”

This connects to ongoing conversations about who our cities are for, and how we can make them more human-friendly, while still enabling those same humans to get to and from work. Is there any potential for Culture Night to be car-free? “I would love that,” van Wylick says. “There’s always a discussion,” she continues, diplomatically. “But there’s always the fact that this is a Friday night, and the timing is a challenge.” Weather is another factor. In 2014 a sudden deluge delayed the RTÉ Concert Orchestra’s concert in Meeting House Square, as the square’s umbrellas proved unequal to preserving precious musical instruments from drips.

In Dublin, Culture Night is also not the only game in town. It takes place in the thick of the Dublin Fringe Festival, so many venues already have their events programmed, and struggle to find a way to extend these for free, a criterion of being part of the Culture Night programme. This isn’t just a Dublin Fringe phenomenon. At Cork’s Everyman Theatre, artistic director Julie Kelleher explains: “Our usual programme of events involves face-painting and storytelling for families, a backstage tour and occasionally a play reading, depending on what the programme is in the main auditorium. If we have a show running in the week that coincides with Culture Night, it’s difficult for us to make the show available for free since The Everyman is so heavily reliant on box office.” About 90 per cent of the theatre’s income comes from ticket sales.

So with all that effort for just one night, what are the benefits? Van Wylick’s own post-event surveys show more than 60 per cent of people saying it was their first time to visit some of the venues, and more than 50 per cent saying they developed new interests as a result. Almost all say that they would visit those venues again. Figures from the National Concert Hall bear this out. In 2018 the RTÉ ConTempo Quartet event at the NCH brought 42 per cent new audiences in.

It’s also an opportunity to feel part of things in a way that is separate from commerce. At Cork’s Glucksman, Fiona Kearney suggests that “it’s a social opportunity to get out and enjoy the city, as well as the art, in a festival atmosphere”. Van Wylick agrees, stressing the sense of coming together and celebration that is such a part of the night. But does that mean that the arts are too dour and po-faced the rest of the time?

Not exactly, as there is always room for the serious-minded, and some people do find value in spending time in darkened rooms discussing relational aesthetics. Culture Night itself is much more about surprise, extending your boundaries, participating in and sharing civic space and broadening the idea of what culture is. This could mean a craft fair in Cork County Hall, a talent contest in Schull, tinsmithing at Pavee Point in Dublin or an evening of exploring the Anthropocene in JJ Hough’s Singing Pub, in Banagher, Co Offaly.

Apart from jazzing things up with face painting and the occasional free snack, what lessons can be learned from the success of Culture Night? Van Wylick suggests that more work could be done to focus on Dublin’s different quarters as vibrant cultural hubs. There can be a geographical laziness to how we navigate the city, as anyone who runs a venue outside the main drags will attest. Collaborations and co-operation also help.

Looked at this way, Culture Night is just one more layer in the awareness that those making and programming the arts and culture in Ireland strive to create. It’s part of that long and sometimes convoluted journey from staying in and watching Netflix to rounding up friends and family, planning, booking, paying out money and, finally, taking a chance on something new. Culture Night may be one night only, but most of the places in the programme are open on the other 364 days too.

Atelier Maser
Charlemont Street, 4pm-10pm
Visit Maser’s studio for an exhibition showcasing the work of renowned street artists from around the globe.

Trinity College Botanic Garden
Palmerstown Park, 4pm-8pm
A Culture Night first-timer: discover plants from all over the world, collected by generations of Trinity botanists. Book for guided tours at 4.30pm and 6pm.

Bretzel Bakery
Lennox Street, 5.30pm-9.30pm
Baking bread for Dubliners since 1870, and formerly the local bakery of the Jewish community; hear about the development of sourdough culture from earliest times and take away a sample of starter culture to bake your own.

AND AROUND THE COUNTRY

Sligo: The Model
The Mall, Sligo, 5pm-8pm
The Sligo Global Kitchen brings communities together to enjoy a global food experience.

Kildare: Rathangan Community Library
Canal Court, Rathangan, 6pm-8pm
Postcard to a Whale/Carta Phoist don Míol: Family-friendly Irish-language event where you can hear stories and make a big postcard – a suitable size to send to a whale.

Kerry: Siamsa Tíre Gallery
Tralee Town Park, 6pm-8pm
The culmination of Zoë Uí Fhaoláin Green’s year-long art residency looks at how our coastline might change in Kerry in the years ahead and how we will adapt.