Why vinyl refuses to die

The inaugural Vinyl festival, which takes place over the May bank holiday weekend, is a boutique event celebrating the golden age of stylus and disc 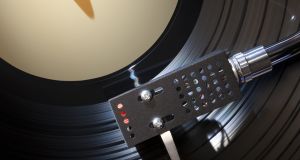 Eight years ago, gonzo celebrity chef Anthony Bourdain published a book entitled Medium Raw, which contained a scathing chapter about the phenomenon of so-called “boutique burgers” in Manhattan. Mass-produced beef patties, he explained, had become so suspect in their composition (dodgy slaughterhouse trimmings) that they had to be treated with ammonia to eradicate risk of ecoli. The result? High-end food establishments began promoting bespoke burgers at 26 dollars a pop, sometimes more.

Bourdain’s beef suggests itself as an analogy for the recent vinyl revival, just substitute the mp3 for the McPatty, poor sound quality for ecoli, and vinyl as the prime cut. High prices are no deterrent – last year vinyl releases outsold digital downloads for the first time. Golden Discs reported their biggest spike in sales since the 1980s. Anecdotal evidence bears this out: my 17-year-old daughter’s Christmas gift list consisted mostly of requests for vinyl by acts like Holsey, the 1975 and Lana Del Ray. (In return I scored the Blade Runner 2049 soundtrack and Nick Cave’s Lovely Creatures Best Of, my first new vinyl acquisitions in some 30 odd years.) The music industry had graduated from flogging back catalogue in new mediums (CDs for the boomers) to new acts in old mediums (platters for the teens).

The inaugural Vinyl festival, which takes place in the grounds of the Royal Hospital in Kilmainham over the coming bank holiday weekend, might be considered the music industry’s version of Bourdain’s bespoke burger joint: a boutique event espousing back-to-basics aesthetics associated with the golden age of stylus and disc. In other words, a celebration of the album or 12-incher as fetish object, as objet d’art. As the high-toned press release has it: “Vinyl is an immersive theatre of the mind that insightfully celebrates the rich history and enduring legacy of vinyl, its landmark recordings, key personnel, and the groundbreaking labels and studios that cultivated such talent. Vinyl will feature specially programmed talks, panel discussions, curated collections, music performances, album playbacks, art exhibits, pop-up stores, signings, and equipment showcases. The various events will each make special use of the RHK’s expansive grounds and infrastructure, from the magnificent Great Hall and Baroque Chapel to its cloistered, cobblestone courtyard.”

Whatever about the “immersive theatre of the mind” stuff, Vinyl is basically Borris House for sound boffins. As well as appearances by My Bloody Valentine founder Kevin Shields (perhaps the ultimate aural obsessive) and studio legends such as Flood (Nine Inch Nails, U2, Depeche Mode), Stephen Street (Blur, the Cranberries, Morrissey) and Victor Van Vugt (The Fall, PJ Harvey, Nick Cave), there’s Portishead’s Geoff Barrow, The Fall’s Brix Smith Start and The Cure’s Lol Tolhurst. There’s also a plethora of sleeve design and photography exhibitions and seminars on anything from audiophile stereo systems to the men from UNKLE. The only thing missing is a keynote speech by Eno and sponsorship by The Wire.

Vinyl is at once niche retro and finger-in-socket current. Since the wild frontier days of the 1950s post-war boom, when the American market resembled a banana republic of independent pop-up labels and exploitation fads, pop trainspotters have devoted time and resources to collecting obscure, imported and rare pressings. The word “vinyl” has become shorthand for a golden age of pop culture (although it couldn’t save Martin Scorsese’s series from stinker reviews), the album-oriented era that spanned roughly from 1966 to 1991.

Audiophile snobbery, however, goes right back to the dawn of recorded music. In his 2009 book Perfecting Sound Forever, Greg Milne described how Thomas Edison doggedly lobbied for preservation of the hill-and-dale cylinder method of recording (based on the premise that the least possible degrees of separation meant the highest fidelity of sound), while the marketing heads at Victrola were pushing for the more durable and portable stylus-and-disc option (also favoured by the public, because it was more user-friendly). Even the venerated disc was once regarded as the digital download of its day.

Milne’s book also cast a cold eye on the near pathological proclivities of 1970s sound system obsessives. “On the heels of ‘high fidelity’,” he wrote, “the word ‘audiophile’ entered the parlance, describing the men (the ‘hi-fi widow’ was a much lamented figure) whose obsessive commitment to high fidelity seemed to preclude any possibility of actually enjoying their hi-fis.” In time, Milne noted, “audiophilia” even became diagnosed as a clinical neurosis.

This insane craving for ever more squeaky-clean frequencies birthed the CD boom and digital recording became the industry standard. We all know where that led: Napster, Pirate Bay, iTunes and Spotify. Music industry veterans from Dr Dre to Chuck D, Lars Ulrich and Neil Young decried the barefaced rape-and-pillage of an entire industry and the dire sound quality of digital files. Some of these artists sought ways of salvaging their profit margin through technological innovations: Dre with his designer headphones, Neil with his digital service, PonoMusic.

But they couldn’t hold back the filthy modern tide. A generation of streaming teens drove fundamental changes in how music is conceived and consumed. One-off tracks replaced sequenced collections. Frequency of releases and maintenance of media profile took precedent over a once-every-three-year “event” album campaigns. An entire generation matriculated having never known the urge to own a physical album, much less obsess over catalogue numbers or sleeve notes. Spotify was more like having access to a radio station in which the listener controls the programming.

But certain acts – Jack White and the Manic Street Preachers among them – remained devoted to producing vinyl pressings. Just last year, hardcore perennial and obsessive vinyl collector Henry Rollins launched a website entitled The Sound of Vinyl, which functions as both information hub and trading post. “I buy records because I medicate with music,” Rollins wrote in his LA Weekly column a couple of years ago. “It makes the day-to-day horror show of existence endurable. It’s like waking and baking but with a different stash. This is what I can’t explain to the accountants, because it is way too intense for lunchtime conversation. In a way, my records are an investment – an investment in the preservation of what’s left of my sanity. I am less an audiophile than I am a vinyl cat lady.”

Rollins is typical of his generation – old punkers and prog-rockers alike seeking to replicate the sacramental curtains-drawn-and-candles album listening experience. Consequently, it’s hard to figure who owns the “cultural moment” when 50-somethings compete with teens for possession of the zeitgeist. This eradication of the generation gap may have had a seriously corrosive effect on new music. Simon Reynolds’ 2011 book Retromania painted a grim portrait of young artists strangled by the weeds of history, the endless re-looping mechanisms of YouTube. At times it reminded me of Wim Wenders’s film Until the End of the World (possibly the best bad sci-fi movie of all time) in which the denizens of an alternative millennial year find themselves addicted to watching recordings of their dreams on handheld devices, to the detriment of their sanity. Wenders’s prescription in that film was the re-imposition of traditional narrative – chronological storytelling – the sort of mass unplug-and-reset many Facebook deactivators, including web pioneer Jaron Lanier, now advocate.

Writers like Reynolds made their names at a time when journalists still occupied the curatorial tastemaker role now ceded to bloggers, vloggers and podcasters. Younger pop culture junkies might find it hard to credit that writers like Nick Kent or Julie Burchill once possessed the same scabrous glamour as the subjects they covered. They might find it even harder to imagine a climate in which a writer might have packed enough influence to get a band signed, or into the charts.

The new breed of professional “influencers” are more interested in branding themselves than espousing some aesthetic position a la Pauline Kael or Lester Bangs. The music journalist, once the industry’s perp and snitch, forever negotiating the thin line between the guest list and the blacklist, has been replaced by the all-tweeting mediator more skilled in monetising their byline through corporate-affiliated playlists or guide-to-the-biz listicles than honing their prose on the necks of their subjects. Many practitioners maintain that the music industry is no longer even an industry per se, but an admin machine run by (as a musician friend acidly put it) “people who make a living off people who don’t”.

Analogue or digital, it’s still, in the words of one of the great vinyl-era acts, a teenage wasteland.