Ed Sheeran: We’re about to become a nation of Edheads

Sold-out tour begins in Cork on May 4th followed by shows in Belfast, Galway and Dublin 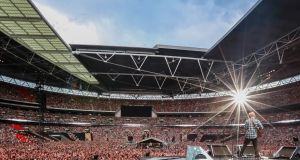 Ed Sheeran performs on stage at Wembley Stadium in July 2015. The singer begins his Irish tour on May 4th. Photograph: Christie Goodwin/Redferns via Getty Images

Over Easter, Ed Sheeran played three concerts in the New Zealand city of Dunedin. To welcome him, the airport changed its signage, a train in the city was renamed The Easter Ed Express, and a giant mural of the singer-songwriter appeared in the city centre.

The city’s Good Friday alcohol ban was lifted, and a major supermarket opened an “Aisle of Ed” featuring only orange products in tribute to the singer’s hair colour.

A “Paint The Town Ed” initiative offered family-friendly spaces, buskers playing Ed Sheeran covers and an “Ed Hunt” for children. The city’s 100,000 population temporarily doubled. Sheeran was afforded a traditional Maori welcome and the country’s prime minister, Jacinda Ardern, invited him to her home where – after grabbing an all-important selfie with the singer – she made him scones.

Sheeran’s three nights playing to 100,000 people in Dunedin was worth €30 million to the local economy.

Irish trains will not be renamed, and supermarkets probably won’t be installing “Aisles of Ed” when Ed Sheeran begins a nine-date tour of Ireland on May 4th. But Irish fervour for all things Sheeran doesn’t fall far short of New Zealand’s.

When the tickets for this tour – with major outdoor shows in Cork, Galway, Belfast and Dublin – went on sale last July, they set a new Irish entertainment record. More than 300,000 tickets were sold in one day.

There have been “special relationships” before between Irish fans and musical acts – most notably Garth Brooks and Bruce Springsteen – but Sheeran, with grandparents from Gorey, Co Wexford, and cousins in Galway, is almost a son of Ireland. It’s easy to forget that he is in fact English.

That he can play the bodhrán, is frequently pictured in Irish pubs “having the craic” and says he wants to come and live here someday would probably be enough to have him elected Irish president if he so desired.

These nine Irish shows will anoint him as the country’s current most loved musical act. His albums and singles will take up permanent residence in the Irish charts, radio playlists will write themselves, and the size of the Dublin shows in the Phoenix Park will be compared and contrasted with that of the Papal Mass in the same venue almost four decades ago.

The nine shows in May will generate a multi-million euro local windfall for each location. From the thousands of fans travelling for the shows – by air, sea or train, the accommodation bookings and the bar and restaurant spends, millions of euros will flow in conjunction with the shows.

Unlike some major-name rock bands who play the same sort of venues, Sheeran’s stripped-down style means his overheads are far lower and entourage much smaller. As such he can wring more profit from his live shows than U2 or The Rolling Stones.

There is other related income. A successful tour will stimulate sales of Sheeran’s back catalogue albums, and increased radio play will generate royalties.

Conventional musical wisdom had it that a solo acoustic artist with little more than a bunch of guitar effect pedals could not headline giant outdoor venues such as Glastonbury or Croke Park. Sheeran exploded that myth.

Sheeran enjoys pan-generational appeal. He arrived on the music scene in 2011 with his debut album Plus. At a time the music world was becoming bewildering diffuse, Sheeran offered a reassuring mainstream folk-pop sound for those who found themselves alienated by the newer genres of music. That his music was cut through with slick R’n’B grooves endeared him also to a younger generation.

He may be a solo act but he has thousands of audience members on backing vocals whenever he plays. At times audiences seem to know the words better than he does.

Sheeran’s unremarkability is remarkable in itself. Looking like he works in a Spar rather than being one of the best-selling musical acts of his generation, he is by no means a virtuoso singer. In ballad mode he has a habit of descending into mawkish lovelorn cliche; his rapping can be plain embarrassing.

Critics say he sounds like James Blunt after hearing a Frames album; a purveyor of soothing lullabies for millennial bed-wetters; the Andrew Lloyd Webber of the Spotify generation: a derivative crowd-pleaser who has unlocked the secrets of the musical lowest common denominator. Others can’t say quickly enough how much they hate Sheeran’s music.

But the critical sniffiness is a rite-of-passage in the enormodome, multi-platinum-selling world he now inhabits, along with Coldplay and U2. The best of his melodic, super-sized, radio-friendly songs can get up and walk for themselves in a stadium setting – and for his followers he provides the best karaoke concert in the world.

He is a disruptor, who bypassed the traditional gatekeepers of the music media and used the critics’ scorn to burnish an outsider-underdog status. His music has entered the fabric of people’s lives – the first, last and arguably only real principle of popular music.

Days of the Ed: Sheeran’s tour dates (all sold out)