For their second album, Dublin-based duo We Cut Corners emerge from behind a wall of reverb 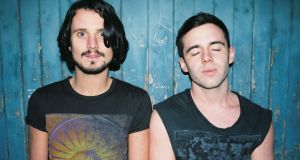 John Duignan and Conall Ó Breacháin constantly finish each other’s sentences, but it’s so seamless and instinctive that it’s only when you transcribe the interview that you notice what’s going on. As a duo, We Cut Corner’s guitarist and drummer know each other backwards, to twist the title of their debut album.

The album in the frame today is Think Nothing, the forthcoming follow-up to 2011’s much admired Today I Realised I Could Go Home Backwards. Think Nothing, produced by Tommy McLaughlin and featuring John Buckley’s string arrangements, sounds plumper and more poised and far surer of its bearings.

Ó Breacháin marks this down to better understanding what they wanted. “We were somewhat naive on the first album. We knew we wanted to use lots of reverb and distortion and delays, but that was largely it. With this one, we were listening to a lot of Vampire Weekend and The Airing of Grievances by Titus Andronicus, so we wanted it to sound brighter and clearer sonically.

“We wanted a more natural ambience so it felt closer to you than the first album. And we knew we wanted to bring strings in for a couple of songs.”

“The lyrics were a little darker,” adds Duignan, “so we wanted the sound to be a contrast to that. We wanted an almost poppy sound and a dark lyrical undercurrent. There’s only drums and guitar so you really have to pay attention to the set-up you have.”

Lyrically, Duignan says the new songs deal with “loneliness, isolation and escapism”, a reflection of the world they see around them. “It can be a very lonely place and, despite the hyper-connected way we live, people seem to be clambering even more for connections.”

Part of the reason for all that reverb on the debut was to provide the duo with camouflage. “In a way, we’re always conscious of not wanting to be brash so we were wilfully diminutive,” says Duignan. “We were always cagey about peaking our head above the surface of the music scene and were quite diffident so that’s why we hid behind huge reverbs and effects.”

“Reverb is the sonic equivalent of a filter on your camera, so you hide behind that,” Ó Breacháin notes. “But live, you have to put all that behind you. No one wants to watch someone cowering on the side of the stage. It’s uncomfortable for you and the audience. We’ve had so many gigs where we’ve come off saying that was not good, so we had to that sort that out.”

The duo have been making music together for many years, first as Camogie Lovers (you’ll find an early version of recent single YKK under that name online). Even in the early days, the duo, whose weekly set at Dublin’s International Bar was the height of things, attracted attention, with offers to appear on RTÉ radio and enquiries from UK label scouts.

“The previous incarnations were just different continents compared to what we do now,” says Duignan. “We spent a good eight years on the songwriting process, with a few day trips into the live sphere which never amounted to anything. It wasn’t until we settled on this set-up and started playing in this guise that things began to happen.”

They juggle the band with day jobs as primary school teachers. Duignan: “Both of us are quite passionate about education and love what we do and I don’t think there’s a lack of compatibility. In many ways, it lends itself quite well in that you have the time in the summers to tour and record. You also have a lot of creative freedom because you’re not worrying about ticking over to bring in cash. We work and put our spare cash into this.”

“The only drawback is that we’d like to spend more time doing this,” adds Ó Breacháin. “I’d like to get up every morning and write and record and learn about music. When you can’t go abroad and create a buzz, there’s no feedback into what you do in Ireland perception-wise, and people think you’re not doing anything.”

Their ambitions centre more on music than anything else, Duignan reckons.

“We’re artistically ambitious in that we want to create a great body of work. We can talk about the various industry machinations that have to fall into place to keep that upward curve going and we want people to listen to our music.

“Getting onstage and performing is ambitious in itself, especially when there is so much music out there and so much going on.

“We want to keep writing music like this,” Duignan adds, “which may have lyrics that some people won’t find accessible. So one is going to be at the cost of the other. Your worry is if you were still playing the same venues in Ireland in five years time and hadn’t moved on. You want more than that.”

Both have considered going full-time with We Cut Corners. “If something was in place, we’d do it in the morning,” Ó Breacháin says. “If a label said ‘here’s seven months of solid touring’, we’d go ‘brilliant’ and hand in our notice in the morning. It seems too precarious a position to do anything else.”

The flip side, adds Duignan, “is that if people view you as a hobby band, you will forever remain that way. That’s what our devil’s advocate of a manager tells us quite often.”

“We’d be terrified, too, that if we took the leap and it didn’t work out that the two of us would be at each other and think of the band negatively,” says Ó Breacháin. “I look at other bands and wonder: if you were with each other constantly, would that have a negative effect on the chemistry that you have?

“We have an ideal set-up. We love our jobs, we love Dublin and, if we can make records like we do, why change that?”