Wanted no more? The bad-boy boyband hang up their party hats

They were the bad boys of the boyband bunch, the darkness to One Direction’s light – but now The Wanted are getting ready to say goodbye. Dubliner Siva Kaneswaran sets the record straight ahead of the band’s farewelll tour 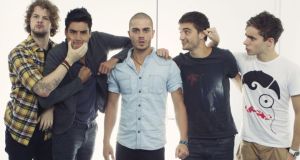 You might not think that Dame Vera Lynn has much in common with hunky popsters The Wanted, but there’s a particular line from her 1940s wartime standard Now is the Hour that sums up the boyband’s current situation. True, it’s unlikely that their fans will be humming It’s not goodbye, it’s just a sweet adieu at their upcoming “farewell” gigs, but with the quintet insisting that they are taking a “break” rather than “splitting up” (the phrase most dreaded by all teenyboppers), the tune might soften the anguish somewhat.

Siva Kaneswaran – the first international pop star to hail from Blanchardstown in west Dublin – insists that their hiatus is not a permanent one. The polite, good-humoured, 25-year-old has a London twang to his accent and a slight propensity to slip into pop-star jargon – the phrases “amazing platform”, “great opportunity” and “about the fans” crop up more than once.

Raised in a musical family – several of his siblings have tried their hand at pop stardom – Kaneswaran’s route into the band four years ago was almost accidental when we was recruited by Justin Bieber’s manager Scooter Braun in 2009. It wasn’t long before they were pitched as the “bad-boy” version of One Direction – the pop group who hung around with Lindsay Lohan in LA, drunkenly shaved each others’ heads and generally courting a reputation for partying hard. Kaneswaran, however, denies that they deliberately provided a counterpoint to 1D’s squeaky-clean image.

“We were always very happy with who we were and who we are. We always said from the get-go that we wouldn’t be overly branded or made into something we didn’t want to be,” he says. “Nowadays, fans know everything about you with the likes of Twitter and the internet, and they aren’t stupid; you can’t lie to them. If we were branded as ‘bad boys’ or anything like that purposely, it would have been an injustice to both ourselves and the fans. And that was us for the first year-and-a-half. We were perfectly happy until 1D came out, and then they went their own pop-branded route.”

What’s a good pop rivalry without a public spat? The two groups have been vocal in their dislike of each other in the past, at least behind the safe confines of their Twitter profiles. The feud has seen the trading of such insults as “chlamydia boy” (1D’s Zayn Malik to The Wanted’s in-house lothario Max George) to charges of jealousy and outright accusations of One Direction being “overrated, arrogant and insincere”. Ooo-err.

Kaneswaran diplomatically suggests that the rivalry is “old news”, a situation that simply “escalated” after a few errant tweets, and that he and his bandmates “wish them well”. But recent Wanted headlines have been more focused on the band’s internal spats, most notably involving Kaneswaran and the aforementioned George. The latter publicly hinted that the reason for the band’s hiatus is the tension caused by their romantic relationships, particularly that of the Dubliner and his fiancée.

“We’ve been together [the band, that is] for four years and, obviously, there’ll be tensions arising and emotions flaring up over the past few weeks, just because of that speculation,” he shrugs. “We released a statement together saying that we’re gonna take a break because it felt natural; anything else was kind of heightened by the press, I think. Obviously we bicker like brothers, so we’re just gonna have to talk it out and move forward for the fans, put our heads down, because it’s all about the tour right now. I’m sure we’ll get past it easy because we’re lads. If it was a girl band, it might be a bit more dramatic . . .”.

Although Kaneswaran denies that the quarrel had anything to do with their decision to take a break, he admits that the filming of their reality TV show The Wanted Life put a serious strain on band relations.

“It was an amazing platform for us because that show went across the world; it’s only starting to be shown in Dubai now, for example. But in hindsight, it was a bit stressful and I wish I’d been a bit more clued-up than I was before we did it,” he says. “In some ways, it kind of put us in very dramatised positions and it definitely escalated a few things. But overall, it raised awareness of us and our music. You learn from your mistakes and move on.”

After four years and three albums, he will spend his time away from the band returning to modelling – it would be a shame to waste that perfectly chiselled jawline, after all – and, like other members of The Wanted, carving out a solo career for himself.

“I’m gonna go down the indie-pop route and try to find my own sound,” he says. “When I was over [in New York] for Fashion Week, I was in the studio with [producer] RedOne and I’m just kind of building my own sound. It’s an exciting time. I don’t think it’s the end for The Wanted, I just think it’s a healthy break. You don’t want to restrict other peoples’ creative endeavours, and you don’t want to make them feel trapped, or anything. So we all feel that it’s natural to do what we wanna do.”

Indie-pop? That sounds rather far removed from “boyband pop’”. Kaneswaran can’t really, truly see a way back for The Wanted?

“Honestly, I do,” he insists. “Honestly, I think, as natural as it was to take a break, it’s gonna be just as natural when we return. It feels healthier this way, because we’ve been together non-stop for four years and in each others’ pockets. It’s been emotional and intense, and there’s been ups and downs, but it feels right. You learn from your mistakes and from your triumphs, and I think I’m ready to do my own thing.”


The Wanted’s Farewell Tour comes to the O2, Dublin, on March 24th and the Odyssey Belfast, on March 25th

Take That v East 17
Take That seemed like lovely lads; the closest they veered to “edgy” was Howard Donald’s pierced nipple. East 17 has a Staffordshire Bull Terrier as a mascot, were from a dodgy part of London and looked like they’d been recruited off a building site. We all know how that one worked out.


Gaga v Madonna
Madonna accused Lady Gaga of ripping off her hit Express Yourself on Born This Way , snidely commenting that “imitation is the sincerest form of flattery”. Gaga’s response? “I don’t want your f**king throne!”


Minaj v Mariah
When Nicki Minaj shared space on the judging panel of American Idol with Mariah Carey, thoroughly entertaining sparks flew. Reports suggested that Minaj walked off the set saying “If I had a gun, I would shoot the bitch”, although the hip-hop star denied it.