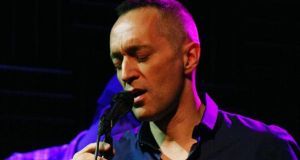 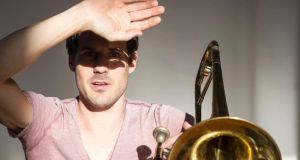 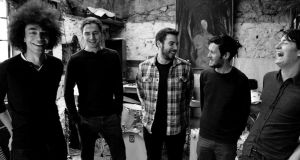 Umbra: Umbra fall somewhere between the cracks of jazz and math-rock/ math-metal, according to Chris Guilfoyle. 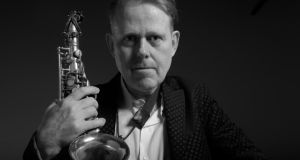 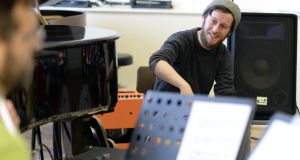 Math-jazz? Heaven knows what Acker Bilk or Kenny Ball would say to Chris Guilfoyle’s self-description of the music he creates and performs with his genre-melting group, Umbra. The buttoned-up, old-school practitioners would surely shake their heads in puzzlement at even a loose definition. Which, by its very nature, says Guilfoyle, is open to interpretation.

“It is always the hardest question to answer. I feel that Umbra fall somewhere between the cracks of jazz and math-rock/ math-metal. The music is unmistakably jazz when it comes to how we approach the improvisation in the tunes, but the tunes themselves sound very close to what a math-rock or math-metal band might write. There might be a few more ‘jazzy’ chords in there, too, so that’s another link to Umbra’s jazz side.”

As part of the Sofa Sessions line-up for the forthcoming Kilkenny Arts Festival, Guilfoyle has added to Umbra vocalist Theo Bleckmann (Berlin), trombonist Nils Wogram (Zurich) and saxophonist John O’Gallagher (New York). Named Superumbra, the interlacing of polyrhythms with geography, of boundary-breaking with natural instinct, is indicative of not only Guilfoyle’s background but also of an animated, urgent strain of jazz music currently uniting old ways with new ideas.

Guilfoyle, of course, has history and heritage to call upon. His father, Ronan, and his uncle, Conor, are two of Ireland’s most acclaimed jazz musicians (and who, along with musician Tommy Halferty, co-founded in the mid-’80s the jazz programme at Newpark Music Centre, Blackrock, Co Dublin). Considering the family history, he acknowledges, he was never going to be anything but a musician.

“I got my first instrument, a guitar, at the age of 12. I realised I could pick up the chords very fast, it was kind of natural, and so I was hooked, basically. From that age, I wanted to play the guitar constantly. There was no other choice in the matter. It’s fair enough to say that I wasn’t going to do anything other than to play music.”

Jazz and punk collided at the age of 15 when his adventures in uniting cool with chaos found an outlet in the then flourishing DIY punk scene in his locale of Bray, Greystones, and Kilcoole. The epicentre of that scene, he recalls, was a deserted parish hall (aka Paddy’s Hall) in Greystones that the teenage musicians were given access to for the best part of five years. Cue a series of weekend gigs by numerous bands from the locality and elsewhere. Guilfoyle views his involvement in this raw hotbed of creative activity as being crucial to his development as a musician. “I went from playing the guitar in my bedroom by myself to being in a band, so I really got a taste of what it was like to be a musician.”

Bands came and went: Kidd Blunt, Margin of Error, Fiddlesticks, The Scavengers, The Spungos (“with my best friends Patrick, Sal Stapleton, who now performs as Bad Bones, and Conor Lumsden, who plays with The Number Ones”). Guilfoyle also played drums in Frigits (with one of the DIY scene’s primary motivators, Dylan Haskins) and was in another band called Metoikos. Around this time, he started studying jazz at Newpark, wherein he began to mix math-metal and punk rock.

“I guess you could almost call Metoikos a precursor to Umbra,” he posits. “I also feel it was hugely influential in how I approached playing music, and how it informed my political view of the world. My tastes changed as I grew older, and my passion for improvising really started to come through.

“The way I see it – then and now – there’s no such thing as half-assed in punk. When you play that music it requires 100 per cent commitment not only to the music but also to the energy you put into it. It’s in my nature to be like that when I’m playing jazz, too, and it has definitely carried over to the sound of Umbra. The group has commitment and energy, and works best when there are other elements involved – I’m also into music acts like Squarepusher, from England, and the progressive metal band Meshuggah, from Sweden.”

Areas in Guilfoyle’s life as a musician have flipped to a degree. Ten years ago, he was studying jazz at Newpark. Now, at its new base in DCU (where his father is the director of the jazz department, and his uncle senior drum tutor) he is teaching guitar to first, second, and third-year students, and contemporary jazz ensemble to fourth years. “The facilities are great, the teaching environment is really good, and it’s great for students to have access to all the normal college things they never had before when they were in Blackrock.”

Having been a practitioner within the Irish music scene for so long (as well as being an educator), Guilfoyle is well positioned to gauge the developments in Ireland of jazz and its strains over the past 10 years. He has seen a definite increase in the number of jazz musicians, for which he credits the high level of graduates from Newpark (as was). Ironically, he feels there are fewer venues in which to play the music, citing the closure of Dublin’s JJ Smyths as a low point for resident and visiting musicians alike.

“Of course, venues such as Arthur’s Pub, on Thomas Street, filled the vacuum left by the closure of JJ Smyths, but historically there has never been a fully functioning dedicated jazz club in Dublin. I’ve always maintained that if there were, it would make the music flourish in the city – and Ireland – but so far there hasn’t been the opportunity for that to happen. While Arthur’s, and the Sugar Club, also, are great places to play in and to feel comfortable in, they’re not the same as London’s Ronnie Scotts or the A-Trane in Berlin.”

A sizeable number of former Newpark/DCU graduates – émigré musicians, mostly – choose to stay in Ireland, contends Guilfoyle, because Irish people and musicians are very welcoming. Certain European cities, he says, are problematic for outside musicians to perform in. “The most famous jazz city outside New York is Paris, and it’s notoriously difficult to get into that city’s scene. Indeed, France in general has always had a bit of a history in being hard to even tour there.”

Ireland is different, he says. There is a compact jazz music scene that – unlike, say, New York – musicians can easily find their way into and not get lost.

“That’s definitely an element of why people stay. They feel as if they’re actually part of the music scene here. If they go back home after graduating, they might feel they have to start their career again. Whereas in Dublin, they are already playing, they’ve made these important contacts in the city and beyond. They can build a career from here and see where it goes.”

What started as a relaxed weekly session among the second-hand sofas in the back room of Billy Byrne’s pub five years ago has turned into a quality, cutting edge concert series that wouldn’t be out of place in an intimate club setting in downtown Manhattan.

In alliance with pub owner Willie Byrne, and programmed by Irish Times jazz critic Cormac Larkin, the Sofa Sessions take another step forward next week with a series of concerts as part of this year’s Kilkenny Arts Festival programme. Chris Guilfoyle has augmented his Umbra quintet with three invited guests (to become, for one night only, Superumbra). The musicians are bona fide VIPs of contemporary jazz: Berlin vocalist Theo Bleckmann, prominent German trombonist Nils Wogram, and much-respected Boston saxophonist John O’Gallagher. In keeping with the Sofa Sessions ethos, each will play a “club” set in Billy Byrne’s during the festival.