The producer says Farrell solo album and Albarn’s The Good, the Bad and the Queen will have new releases in 2018 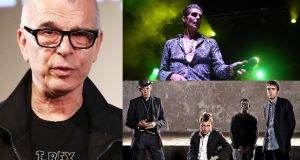 Visconti is recording with Jane’s Addiction’s Perry Farrell on a solo album and Damon Albarn’s The Good, the Bad and the Queen. Photographs: Getty Images

“I’ve produced an album for Perry Farrell, which will come out in 2018,” Visconti said speaking from his New York home. “He is a very talented and smart man. I love his music.”

Visconti is also involved with another project from highly prolific Blur and Gorillaz singer Damon Albarn. “In the middle of 2017, I started working with Damon Albarn. I’m working on his The Good, the Bad and the Queen album with Paul Simonon [The Clash], Tony Allen [Fela Kuti] and Simon Tong [The Verve],” Visconti says.

“We’re about two thirds of the way through and taking a break, as Damon is off on a Gorillaz tour, but we will resume in April and it will be probably be out before next Christmas,” he revealed. “It’s a great album and I think people will be very impressed with it.”

The producer, who has also worked with Irish artists Thin Lizzy, The Boomtown Rats, The Radiators and Imelda May, is also involved with the 11th studio album by seminal English punk band The Damned.

“I only finished with The Damned last night,” Visconti revealed. “It’s coming out in two months, which feels really good. I was doing marathon remixing for three solid days. I didn’t have time to eat properly and I was subsisting on pitta and hummus, yogurt and blueberries and popcorn.

“It’s been a very busy year. I’ve had no breaks since January, so I’m taking Christmas off. I’m going to get fit again and lose some weight.”

The Ziggy Stardust producer will be appearing at the Dublin Bowie Festival in January as part of Tony Visconti & Woody Woodmansey’s Holy Holy in Vicar St on Monday, January 8th, which would have been David Bowie’s 71st birthday, and just before the second anniversary of his death.

Holy Holy will perform Ziggy Stardust and The Spiders from Mars album in its entirety, plus selections from Bowie’s back catalogue.

Patrick Kielty: ‘We weren’t sure how many people would turn up – 400 queued around the corner’
Real news has value SUBSCRIBE