Gig of the week: Damien Dempsey at Vicar Street

For the past 10 years, the Dublin singer has followed his own characteristic path 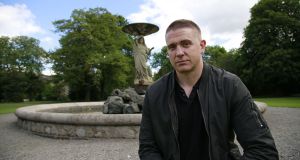 When Donaghmede’s Damien Dempsey first wandered into the public domain 20 years ago, he was viewed with some scepticism: simply put, he didn’t fit the required photo-fit image of a singer-songwriter. Broad of shoulder, over six feet, a shy lad, and the owner of a voice that cared little for subtle pronunciations, Dempsey introduced himself with a straightforward song by the name of Dublin Town.

We should have known what was to come, of course, because some time before the debut single was released he had entered a national radio station song contest with Cardboard City, an original tune about his city’s homelessness crisis. Clearly, here was a songwriter that, similar to an early champion, Christy Moore, had other things on his mind than rhyming moon with Brigadoon.

With Cardboard City and Dublin Town, Dempsey laid down a rough template of social awareness that was, back in the mid-1990s, hardly a topic of urgent conversation among the Irish singer-songwriter community.

It would be a few years before Dempsey released his debut album (2000’s They Don’t Teach This Shit in School) and it would be a few more until he really established himself as a solid national presence. But then something happened – enter Sinéad O’Connor.

Dempsey’s influences at the start of his career were easy enough to discern. Those who had primed his blend of coarsely written songs included Luke Kelly and Bob Marley, two performers that had informed, respectively, O’Connor’s 2002 album Sean-Nós Nua and 2005’s Throw Down Your Arms. Recognising a kindred rebellious spirit, she invited Dempsey on tour with her, guested on his Negatives Vibes EP (2002), and, rather crucially, introduced him to her former husband, London-based record producer John Reynolds, who has since worked with Dempsey on all of his subsequent albums.

Another shift in recognition arrived when Morrissey signed Dempsey (temporarily) to his record label, but the past 10 years have seen the Dublin singer follow his own characteristic path with covers (The Rocky Road, 2008), studio work (Almighty Love, 2012), greatest hits (It’s All Good, 2014), gig-only releases (No Force on Earth, 2016), and this year’s studio record, Soulsun.

It amounts to a catalogue of work that surely even his most ardent fans of 20 years ago may have thought was unachievable. That’s Dempsey for you, though – a man who keeps his own counsel while singing from the top of his lungs on topics that, with neither fear nor favour, he has been passionate about for a longer time than most. A class act and some boyo – it isn’t often you get two for the price of one.