It Takes A Village to put on a festival in Trabolgan

How Music Works: Joe Kelly is organising a festival in Trabolgan holiday village in Co Cork in April, aimed at veteran festivalgoers who are fed up of mud, tents and portaloos 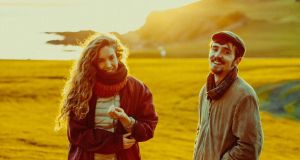 The thing Joe Kelly finds most surprising about putting a festival on in Trabolgan holiday village in East Cork is that no one had got there before him. The Cork promoter, who has had prior involvement in The Pavilion, Sir Henry’s and Bodega and is currently putting on gigs in St Luke’s Church in the city, approached Trabolgan 15 years ago but the timing only felt right this year to actually do it.

The festival in question is called It Takes A Village. It was conceived by Kelly with Ed O’Leary, and aims to bring 1,000 people to the 120-acre holiday home site in mid-April, offering them chalet and camper van accommodation and a lineup of music that includes Young Fathers, Andrew Weatherall, Talos, Fujiya & Miyagi, Anna-Mieke Bishop, Brian Deady, Le Boom, Donal Dineen, Bitch Falcon and more alongside on-site leisure activities.

Kelly and O’Leary might be the first to do a festival of this kind in Ireland but they point to festivals in the UK such as All Tomorrow’s Parties which used similar holiday home sites.

“People are a bit more discerning now,” says Kelly. “So the idea of a weekly club night or that type of thing is gone, blown, see you later. It is all event-driven now, people want a one-off.”

It Takes A Village is part of the current wave of festivals put on and attended by veterans of the form, who have had enough of the mud, the unyielding, unpredictable Irish weather and the predictable layout of most festivals. Trabolgan is a functioning serviced site and so lends itself to a festival; the organisers only have to bring in the PA, lights, food stalls and bits and pieces as opposed to toilets, power and everything else.

“There are 172 houses on-site and Trabolgan do this week in, week out,” says Kelly. “There are no silk flags on-site and fairies in the forest, but what I mean by that is we are not trying to pretend that it is anything other than what it is. Which is, it’s a holiday village for nine months of the year and to that end, we’ll work with the fun bits.”

Those fun bits include daytime pool parties in the Trabolgan swimming pool, where DJs will play and take advantage of the wave machine. There’s also an arcade, five-a-side soccer, crazy golf, ziplining, rock climbing and more on offer.

“We’re going to bring a historian or two because literally around the corner is Roche’s Point,” says Kelly. “So we are really at the mouth of Cork Harbour which is both interesting and historic in a Cork sense.”

Experience or age may also breed a need for comfort, which Trabolgan caters for.

“I suppose as people get a little older, the fact of even a hot shower and a bed and that you can park the car outside your house is appealing. The only time that you might get wet might be a 20-metre walk from your house to the central area.”

As for the music, the bookers wanted to focus on Irish music first and foremost and say they didn’t want to feel obliged to bring in big names. As a seasoned gig-goer and event planner himself, Kelly feels some of his favourite music discoveries at festivals have been previously unknown to him. At the Big Chill festival in the UK in 2011, for instance, which was headlined by Kanye West, Kelly wandered into a tent to hear some reggae and was met with the sight of DJ Derek, a 70-year-old reggae DJ in NHS glasses.

“What I learnt from that is that it doesn’t matter if your bands are not known. We hope that people basically will go and trust how we pick bands. There will be no bad bands. You might not like a type of music but you won’t be able to say they’re a bad band.”

The number of international acts is limited to Young Fathers, Andrew Weatherall and Fujiya & Miyagi. Kelly feels they don’t need to go further afield to bring in too many acts.

“There are enough good, diverse Irish acts around but we’re bringing in a few foreign acts just to spice it up a little,” Kelly offers. “Broadly, it goes from trad, folk all the way through to reggae, rock, house music, dancehall. It’s almost like the Late Late Show line – there is something for everyone in the audience.”

The Translator’s Funeral, a new short story by Rónán Hession
2

‘Harry’s showgirl’: 10 things we’ve learned from the new book about Meghan and the prince
7

Pinocchio: A gorgeous but dark and unsettling reworking
8

Donald Clarke: Stop me if you think you’ve heard this one before
9