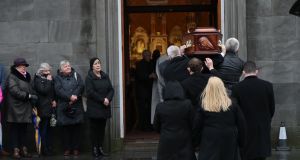 The coffin of Dolores O’Riordan arrives at St Joseph’s Church in Limerick for a public reposal. Photograph: Niall Carson/PA

Thousands of people attended the public reposing of rockstar Dolores O’Riordan in her native Limerick on Sunday, as the county begins three days of mourning for one of their most famous daughters.

The singer – holding a pair of pearl rosary beads – lay in an open coffin inside St Joseph’s Church in the city. Fans from all around the world, including Spain and China, queued in the wind and rain along Barrington Street and into Quinlan Street all afternoon to pay their respects.

In a tribute normally reserved for Presidents, Popes, and heads of State, O’Riordan’s remains lay in an open coffin in a four-hour public reposing at St Joseph’s Church, in the Treaty City.

O’Riordan’s remains will be reposed in Cross’s Funeral Home, Ballyneety, Monday from 4-8pm. Her funeral mass takes place Tuesday at 11.30am in St Aible’s Church, Ballybricken, ahead of a private burial in Caherelly Cemetery, where O’Riordan will be laid to rest alongside her late father Terry.

O’Riordan’s mother Eileen and her six siblings accompanied her dark wooden coffin into St Joseph’s Church, which was decorated with white roses, photographs of the deeply religious star performing on stage, and of her two separate meetings with the late Pope John Paul II at the Vatican.

Fans said O’Riordan who was laid out in an open coffin wearing black and holding a set of pearl rosary beads looked “at peace”.

“She was so lovely, so peaceful, so beautiful. She looked like a doll,” said Co Clare grandmother May O’Connor. Chinese nationals, Fan Yan and Yawen Shem, both aged 27 and studying nursing and biology in Tralee, said O’Riordan was a major star in their home country.

“Dolores has lots of fans in China. The most famous singers in China have similar styles (to Dolores); they learn from Dolores and they are influenced by her,” Yan said.  “I’m really sorry for Dolores’ family’s loss. It’s so real, and unreal, to see her lying there in the church,” added Shem.

Some of the singer’s greatest hits played out in the church while mourners, stood in silence and remembered her.

Others wept and hugged one another as Bishop of Limerick, Brendan Leahy told the packed congregation: “I am conscious that, while millions across the world have been shocked by the sad news of her death, today is about Limerick’s public moment to bid farewell.”

“We come to offer a heartfelt greeting to a deeply loved and cherished daughter of Limerick. As we file past her coffin, let’s pray for her, her family and those she loved and helped in life,” he said.

Fifty of O’Riordan’s former classmates from Laurel Hill Coláiste FCJ, each carried a single daffodil into the church and laid them by the side of the altar. A floral tribute left next to the singer’s coffin from her Cranberries bandmates — brothers Noel and Mike Hogan and Fergal Lawlor — read: “The song has ended, but the memories linger on.”

Neighbours of the singer, Sinead Tierney and her daughter Kerry, thanked Eileen O’Riordan for allowing the public to say goodbye to Dolores in such personal circumstances.

“I think it’s absolutely wonderful of her mum and her family to give us this today. It was very kind of them. We’d always see Dolores (walking) on the road when she was home. We’ll miss her,” they said.

West Cork native, Marian Vallely, who began a teaching post at the Limerick Model national school, on Dolores’ first day there, also came to pay her respects. She added: “We saw her talent early on. I remember her standing on one of the school desks, singing to 5th and 6th class pupils, and how proud she was.”

Former Labour Minister or Education Jan O’Sullivan, who held a civic reception for The Cranberries when she was Mayor of Limerick in 1993, also paid tribute to the “no airs or graces” star.

“Dolores’ voice was so haunting. She was such a strong personality. I think she gave an awful lot, particularly to young women of her own age, she really spoke for that generation,” the Limerick TD added.

Limerick fan Karina Hanley described O’Riordan as “an icon, a legend, the only rock star to come out of Limerick.”

“Go gently Dolores, go gently,” she added. Nicola Mescal, from Limerick, thanked the star’s family “for giving us this opportunity”.

“She looked so peaceful. It’s very sad for us to have lost our little rock star.” Others, inconsolable in their grief, wept and hugged one another outside the church.

Wiping away tears, Barcelona native Miriam Rodriquez, who traveled from her home in Dublin, said she was “super sad. I started to follow Dolores when I was 12. I’m 35 now, so it has been half my life.”

O’Riordan, known affectionately as “Dolly” in her hometown, was discovered in her hotel room last Monday. An inquest into her death, opened at Westminster Coroner’s Court last Friday, and was adjourned to April. Police have ruled out foul play.

In 1990, O’Riordan replaced Niall Quinn as The Cranberries’ lead singer went on to sell more than 40 million records. Two of the band’s biggest hits Linger and Dreams were originally recorded by their first manager Pearse Gilmore.

“I was totally shocked, it came completely out of the blue. There was no warning at all. It’s very shocking for such a fantastic artist to die so young.”

He described O’Riordan and the rest of the band as “amazing” to work with.

“I managed them for a year and a half at the very start. My memories of it are that the whole gang were amazing people. They were so down to earth, so rooted, and very natural people.”

“A lot of people in the music business can be frauds or fake and they want to be stars, but the guys and Dolores – maybe they wanted to be stars – but it was in a much more natural organic way.”

He said his favourite Cranberries song is Ode To My Family. “The lilt in Dolores’ voice is incredible on it, beautiful. That’s the other thing about her, the fact that she had a strong [Co Limerick] accent, and she kept it. I loved that she kept the accent so strong,” he said.

“My abiding memory of Dolores is that she was great craic and she was a really fun person to be around. She had a really high energy, like she was plugged into something . . . She was sound.”

Barry Geraghty: What the queen taught me about horse racing
9