Dolores O’Riordan: ‘I still get chills every time I hear her sing’ 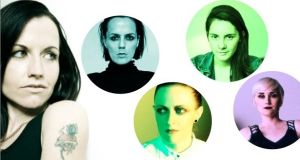 The thought that’s sitting with me is that there are all these people saying all these beautiful and lovely things about her, but I’d imagine she probably didn’t think half these people thought of her at all. That’s what’s so sad about it.

She went through a lot of s*** with her health. She had been through the mill. The outpouring of love and respect from people has been phenomenal. It’s sad that she never got to hear that. She meant a lot to a lot of people.

I used to look at Dolores and just be in awe. This woman! And she’s from Ireland! And she sings in her own accent!

She came out with these powerful songs about politics, but then Linger was about being left at a school disco. When you were a teenager that’s the stuff you needed: you needed to know somebody was feeling the same stuff as you.

If you’re around our age and on a night out, you’re going to end up singing Zombie at some point in the wee hours. Everybody knows it. Everybody gets into it. Those songs are very rare.

Maybe we took her presence for granted. With those 1990s rock stars, if you got famous it was big time. The only people doing that now are the Rihannas and the Taylor Swifts. I had this thought today: if someone is in a band and they want to play rock music, who are their female heroes now? We’re still getting that wave of 1990s bands. I saw The Breeders a few weeks ago, and they were brilliant, but who are the new Breeders? Really good, popular, pop-sounding indie rock music: that sound doesn’t exist any more.

The Cranberries were big when there was also a massive rave scene in Dublin. I remember lying on a couch, high as a kite, in Ballyfermot, and No Need to Argue was playing on repeat, and nobody would change the CD! Every 45 minutes or so you’d just hear, ‘Do do do do’ [the opening to Ode to My Family]. There’s such nostalgia attached to it all.

Did I love The Cranberries the same way I loved Nirvana in the 90s? No I didn’t. But I loved them more in my older years. A lot of those bands were taken for granted because there were so many good bands around. Now when a quality band comes around it’s more like a surprise. There were females around in big bands then. I’m more politically minded now and see how important these things were in retrospect.

I don’t know how many house parties I’ve been at where I’ve put on Dreams and insisted everyone listen to it.

For me when I was a teenager, and picked up a guitar for the first time, looking at the thing that seems so true about Dolores is that she was so authentic, the way that she sang and she wrote. So many people change the way they sing, but she just sang in her accent, and from her heart. That really resonated with me.

If you listen to her singing on Zombie she’s doing that thing where she flicks from falsetto to full voice. The inflection at the end of those bits, there’s not many artists who do that. Alanis [Morissette] did it as well. If you go to singing lessons, or are being educated about music, some of that stuff can be beaten out of you.

She seemed to have rocked into the band, not have any preconceived notions of what she should be or what she should sound like. She was herself. There were so few women artists in Ireland at the time, and having someone out there who didn’t give a s*** what anyone thought of her was amazing.

Dreams will always be my favourite song of theirs. I’ll never got bored of it. There are so many amazing hooks in that song. Go back and listen to the harmonies she’s singing. And for the best part of a song to be this amazing vocal at the end? It’s so incredible.

I remember seeing Zombie and feeling mesmerised by her

The Cranberries had a massive impact on myself and Ellie [Macnamara’s bandmate and twin]. We were a bit younger when they started doing well, so my first memories of hearing them was when I was in primary school and we would go to my granny’s and watch MTV.

I remember seeing Zombie and feeling mesmerised by her – not only her voice, not only her performance, but also the fact she was singing in her own Limerick accent.

I didn’t properly start listening to The Cranberries until I was in secondary school. The one album I had on repeat all the time was Everybody Else Is Doing It, So Why Can’t We? It wasn’t really until then that I started to appreciate her not only as an amazing vocalist but as a songwriter. She has that sweet Irish lilt in her voice but then unleashes this powerful grit inside her.

It was around that time myself and Ellie started writing music. She would have been a big influence on us when it came to performing, but also writing our own music. In 2010 we played the Special Olympics opening ceremony in Thomond Park with them. We didn’t actually get to meet them – they were rushing in and out – but it was incredible to have that opportunity, in the beginnings of our band, to get to play with one of our idols. To hear her sing in the flesh in front of us. I still get chills any time I hear her sing.”

In conversation with Una Mullally