This Heat: the band who came in from the cold 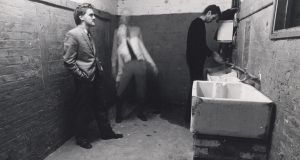 Three men in the bones of a meat factory. Camberwell, 1976. A reel-to-reel tape turns and records Charles Hayward, Charles Bullen and the late Gareth Williams as they rehearse. Oxide-coated Ampex half-inch tape captures a complex sound. This music has crawled out of kraut and prog rock and is set to prefigure the astonishing innovations of post-punk. The studio is called Cold Storage. And the band? This Heat.

“People keep classing us as post-punk but we started before punk,” says guitarist Bullen, pointing out This Heat’s first LP was recorded between 1976 and 1978. “We heard about this new thing happening but it was a disappointment. We thought punk was going to be revolutionary. But it just sounded like rock and roll.”

Forged 40 years ago, just as the excesses of prog rock collapsed under the bulldozer force of punk, This Heat’s sound is complex. At times violent and disturbing, it nods to Robert Wyatt’s Soft Machine and Matching Mole. Incorporating dark elements of found jazz, it exudes intelligence. A world of engineering signals, open channels, senders and receivers, sources and receptors: this is the cold war folk landscape mapped by This Heat.

“I bought a keyboard with my brother when I was 13,” says Charles Hayward, drummer and multi-instrumentalist. “It had a 14-note octave instead of a 12-note one. It wasn’t in tune with itself. It was a keyboard from the 1950s with settings like ‘bassoon’ - bad imitations. That keyboard is all over both albums [This Heat and Deceit]. It exploded as we were recording Cenotaph. You can hear its last moments on the record.”

This Heat titles such as Test Card and Horizontal Hold allude to transmission, to analogue technology and its maintenance. In the 1970s, TV stations were dormant by day, their slots occupied by static shop-window colour-spectrum displays or the BBC’s little girl at the blackboard. When This Heat were recording between 1976 and 1981, there was mystery in technology, magnificent flaws in its testing and repair.

“We had a decent reel-to-reel but then we started using cassettes. We couldn’t afford to keep buying reel-to-reel tape,” says Bullen. Obsessive about recording Cold Storage rehearsals, they incorporated these tapes live and in studio. “We used them for The Light in the Attic label re-releases.” Had time taken its toll? “Yes. Ampex started using a certain type of glue in the 1970s and, if you don’t bake the tape before you play it, it sheds. All the oxide comes off and the music falls on the floor.”

Sonic debris? This chimes with drummer/singer Hayward. “What disappoints me about most current technology is it resembles the clerical. It’s secretarial. You have to click and take something across, give it a name . . . Everyone says the technology is fast, but in my cosmology, it’s only fast in a quasi-blasphemous way. You transfer a 45-minute piece but it’s across instantaneously. Music deals in time.”

Hayward has drummed with Gong and anarchist group Crass, and on sessions with Everything But The Girl. Since This Heat dissolved after Deceit (1981) and bassist Williams’s relocation to India, he has performed prolifically including a while with Ted Milton’s brilliant broken-jazz, angular Blurt. Like Bullen, he invests a smart diligence in intense musical exploration.

In the late 1970s and early 1980s, near-contemporaries Pil, XTC, Gang of Four and The Fire Engines made tense experimental music, but one familiar despite its post-modern muscle. While Rip, Rig and Panic mined avant-garde jazz, perhaps Glenn Branca and Sonic Youth come closer to This Heat and the static interference of that period. TV reception was damaged by sunspots, radio stations were badly tuned, tapes were layered with hiss: we all fished in a crowded, polluted ether. Now this timbre is gone. The last vestiges of the squawking dial-up modem were banished with wifi. There are no radar bleeps. When all the cogs turn silently, how do we navigate?

“You have hit on a real problem,” says Hayward. “What we did was really folk music. At 17, I heard slats of wood bouncing on a lorry late at night – like the snare drum of reggae – and thought there is a new urban folk music which synthesises from the urban landscape. This Heat were aware of mainstream culture as a way of imposing the hegemony, and we were using music to de-program that. Especially on Deceit – there were fragments of mainstream culture turned back on themselves. Fragments of prayers, adverts, prayers for a new sensibility, the US Declaration of Independence.”

Hayward links this modernist folk back to his own birth in 1952: “We were playing in the 1970s but you can smell the 1950s. You can smell the 1940s as something that affected children who were born in the 1950s – what it was like to have been brought up by men who had gone through the second World War.”

Hayward and Bullen have returned as This is Not This Heat, renamed out of respect for their dead bass player. The songs reference language, empire, surveillance culture and pollution, all relevant today. “What’s going on is a war by control . . . The 1960s opened too many things up,” says Hayward. “It happened via a good health service, good education and a very open mass culture of film and music. They realised where they went wrong and they are just shutting things down.”

Hayward sees their art as communal: “Music is not supposed to be heard as a solo, selfish experience on headphones. It is supposed to move the air and brush against your flesh . . . The harmonic world washes over people’s bodies – they are each reconfiguring it in their head . . . We have to change the music before we can change the politics. Like that Greek thing: when the mode of the music changes, the walls of the city shall shake.”

This Is Not This Heat play the National Concert Hall on Saturday, March 3rd