‘Black 47’, Lance Daly’s film that addresses one of the most traumatic periods in Irish history, is a story that has barely registered on the big screen before 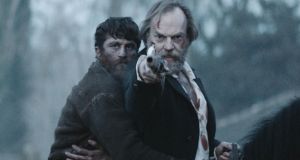 “We couldn’t have asked for better,” Lance Daly tells us amid the bustle of the 68th Berlin Film Festival. “It really is one of the major festivals. They have put it on Friday night in the premiere venue. We have the cast here. So it’s a really good launch for it.”

Yes, it matters that Black 47, Daly’s fine near-western set during the Great Famine, gets its first outing by the Spree. Half a century ago, the festival circuit on the European continent comprised a dizzying whirl of competing events. Many of those jamborees still flourish, but a Big Three – Venice, Cannes and Berlin – now boss the rest when it comes to world premieres.

As I make my way from the press conference for Black 47, I am caught up in a whirl of activity outside one of the main venues on Potsdamer Platz. Look! It’s actual Robert Pattinson and actual Mia Wasikowska on the way into the first European showing of Damsel.

Conceived amid the rubble of the post-war years, opening with a belated outing for Alfred Hitchcock’s Rebecca, the Berlinale (as you must learn to call it) has awarded the Golden Bear, its top prize, to such pictures as Terence Malick’s The Thin Red Line, Ingmar Bergman’s Wild Strawberries and – never let it be forgot, Gaels – Jim Sheridan’s In the Name of the Father. The press attention matters. Access to the hectic film market matters almost as much.

“We have a sales agent and they would have relationships with distributors at the market,” says Daly, who also directed the acclaimed Kisses in 2008. “They’d usually have market screenings. Those aren’t ideal. People are shopping during them. It’s vital that we are actually in the official programme. To have all the distributors there with a proper audience is vital.”

Black 47 already has distribution in Ireland and Germany. The team is offering the rest of the world a taut revenge thriller concerning Feeney, a former British soldier, who returns to discover an Ireland swamped in catastrophe. Those family members that survived starvation have been annihilated by a cruel ascendency eager to secure exclusive, uncomplicated control of the land.

Played with stoic charisma by James Frecheville, Feeney then launches a violent campaign of retribution. The equally taciturn Hannah, played by fellow Australian Hugo Weaving, is hired to track the renegade down. Do not allow the top-line Antipodean presence to lead you astray. Black 47 swells with several generations of Irish talent including Barry Keoghan, Sarah Greene, Stephen Rea and Moe Dunford.

“I know how difficult it can be to get Irish productions on the world stage,” says Dunford, star of Patrick’s Day and Vikings. “It’s the first movie that I’ve been involved with that has the capacity to connect with a worldwide audience. That’s to do with the people involved, the story and the scope. Everything feels lived in.”

As the talent gathers for the press conference at the Hyatt Hotel, one gets the sense that two intricately entwined projects are being discussed. Black 47 is a rugged adventure in the style of The Outlaw Josey Wales. But the picture also addresses the most divisive and traumatic incident in Irish history. It hardly seems possible, but the story has barely registered on the big screen before.

It almost happened once. In 1937, Liam O’Flaherty dedicated his epic novel, Famine, to the Irish-American film-maker John Ford. The two men had collaborated on The Informer and O’Flaherty spent years trying to cajole Ford into adapting his story of the Great Hunger. Sadly, Ford never got around to it.

In a recent, informative piece for History Ireland, Bryce Evans argues that Ford may have made his Famine film by proxy in the dustbowl epic The Grapes of Wrath. “[The dustbowl] was similar to the Famine in Ireland, when they threw the people off the land and left them wandering on the roads to starve,” Ford said. At any rate, when he came to make an Irish film, he settled for the twinkly The Quiet Man.

The Famine has barely figured in cinema since. The subject triggers anger when there is even speculation about potential disrespect. Recall, for instance, the furore that kicked up a few years ago when a Dublin writer discussed the vague possibility of a dark TV comedy with the Famine as its backdrop. There may, perhaps, have been less controversy if there had been any earlier effort to address the issue seriously in the cinema. The Famine has taken on the quality of a sacred theme.

“It’s hard to find a way in,” Daly says. “It’s hard to find a story you can tell that the audience can bear sitting through . . . When you do attempt it you realise why. It’s impossible to portray the suffering. It’s so horrific. So we did an awful lot of historical research. We had a lot of the leading historians on the Famine on speed-dial. We’d call them every day.”

The screenwriters settled upon a classic story with a familiar shape that viewers can slip into comfortably. The violence is intense, but carefully rationed. We move gradually towards a bloody epiphany.

“For me, it was important to establish an emotional connection with the characters that went beyond the horrors they have to endure,” Pierce Ryan, one of the writers, explains. “The main character of the returning ranger was grounded in a quote from an interview with a Connaught Ranger from the 1870s, who was asked why he left his home in the west of Ireland to join the British army. His reply was: ‘I wanted to see what was on the other side of the hill’.”

Within this structure, the film-makers have accommodated a great deal of vital history. There is a scene representing the Protestant effort to exchange souls for soup. We are reminded that grain was being exported under armed guard. Jim Broadbent plays a landlord – often an absentee – who sees the Famine as a convenient way of clearing the land. Early shots of emaciated bodies remind us of contemporaneous illustrations.

Much of this information will be known to domestic audiences. But Black 47 will be telling unfamiliar stories to foreign audiences. All subsequent Irish history spins out from his unhappy centre.

“It is the most significant moment in Irish history,” Stephen Rea tells the gathered press in the Hyatt. “We all live with it. We feel a sense of shame about it. It led to an increased demand for independence on behalf of the Irish. The resonances of it still exist. They are in the film. It was a no-brainer. I wanted to do it. It’s a huge film in a way. It’s strange that it hasn’t been done before.”

A woman from Quebec stands up to point out the connections with her own country’s immigrant history. The hubbub is all positive. Following the premiere amid the glass towers of Potsdamer Platz, positive reviews begin trickling out from the trade papers. The reliable, perceptive Jessica Kiang summed up the mood in Variety. “This may well be the first encounter international audiences will have had with the Great Hunger, and for them Daly delivers a resonant, beautifully performed Irish Western,” Kiang writes.

Black 47 next touches down as the opening film of this week’s Audi Dublin International Film Festival. It seems likely to play well. Then it must light out for the territories. No pressure. It’s taken only 170 years to make it on screen.

Like every other cinema event in the #metoo era, the esteemed Berlinale has become caught up in conversations about women in the industry. Only four of the films in the official selection are by female directors. On the days before the event began, German actor Anna Brüggemann, under the hashtag #NobodysDoll, urged female attendees to abjure high-heels and low-cut dresses (with only limited success). At Berlinale events, Isabelle Huppert and Robert Pattinson offered unqualified support for the #MeToo movement. Meanwhile the main competition provided the usual Berlin mix of the austere and the accessible. The event kicked off with the world premiere of Wes Anderson’s characteristically off-beat animation Isle of Dogs. “A dazzling family movie with the darkest of hearts,” Kevin Maher of the London Times said in one of many raves. Also fighting for the attention of critics is Gus Van Sant’s Don’t Worry, He Won’t Get Far on Foot, featuring Joaquin Phoenix as quadriplegic cartoonist John Callahan, and Christian Petzold’s much anticipated Transit. Though hardly a household name, the Filipino director Lav Diaz is sure to tickle highbrow sensibilities. Diaz won the Golden Lion at Venice with the 228-minute The Woman Who Left. Season of the Devil, an avant-garde musical, runs a whole six minutes longer. Don’t rule out its chances of a Bear. Outside the main competition, eyes will be levelled at Lance Daly’s Black 47 and Idris Elba’s Yardie, a crime drama that is the actor’s debut as director.