Pete Lalish of Lucius on the intoxicating majesty of Howie Gelb 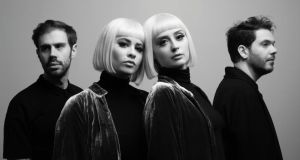 Lucius, with Pete Lalish far right: “The pianos were all out of tune and sounded like someone had tossed a handful of forks into the inner workings.”

Someone passed me this record in college and it felt that a very unique door had been opened up. I peered inside to an image of the southwest that felt so romantic.

The pianos were all out of tune and sounded like someone had tossed a handful of forks into the inner workings.

The guitars were big and loud and sounded like they might explode into a screaming feedback baby if you were to set them down for even just a moment.

The drums sounded like they were tucked away in the back corner of someone’s old garage and had been been dragged out and played without giving them a dusting-off.

Howe Gelb’s vocals sounded like an old man, whispered into a mega phone, asking you to come closer. When you got close enough, he’d tell you a dirty joke. Howe Gelb’s wit is a weapon.

His ability to connect the strange world together in such odd and beautiful ways is intoxicating. His style of rhyming and rhythm feels almost like hip-hop.

Sonically this record set me on a new path. It gave me a new goal. Make sure someone is making sure to play all the wrong notes. Keep the unpredictability metre set high.

Take a beautifully written song, a classic song with a straightforward form and throw it to the wolves. Give it to people to have fun with.

Even though it sounds like chaos at moments, I knew that a lot of work had gone into making a record sound so wild. I wanted to make music like that.