The softer side of all new White Denim

The Texan band are back in a new guise and with a more live, less tightly wound sound 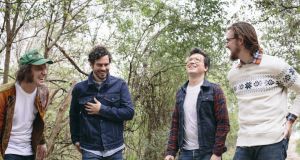 Sometimes, all you need in your life is a short, sharp collection of soul-infused rock’n’roll songs. That’s exactly what was on White Denim’s agenda when the Texan band regrouped to record their seventh studio album, Stiff, late last year, but there was one notable difference: 50 per cent of the band had quit.

The way frontman James Petralli tells it, it came as a shock when founding member and drummer Josh Block and guitarist Austin Jenkins decided to leave the band last summer to pursue other lines, after their heads had been turned by writing and playing on Texan breakout soul star Leon Bridges’ debut album.

“Oh, it was a total surprise,” says the affable frontman and guitarist. “But we were a trio for a lot of years, and so Austin was kind of a late addition to the group, so . . . shoot . . . I really don’t know how to say this without saying it wasn’t a huge trauma to lose a second guitar player,” he laughs. “Losing Josh was definitely tough. We were at a loss for a couple of months, for sure.”

Petralli and bassist Steve Terebecki drafted in two new members, drummer Jeff Olson and guitarist Jonathan Horne, for the recording of Stiff. Both had worked on Petralli’s own solo record under his guise Bop English last year but are already no longer with the band; instead, Petralli is trying out new members on a rolling basis, which means “a lot of rehearsals”.

The shake-up resulted in a White Denim record that sounds looser and more soulful than any of their previous, tightly wound, thrashy punk-tinged albums, best heard on the likes of Ha Ha Ha Ha (Yeah) and the slinky Take It Easy (Ever After Lasting Love). Conversely, he wasn’t particularly influenced by soul artists this time, instead listing Thin Lizzy, the Allman Brothers and “Chrissie Hynde’s attitude” as prominent features on his stereo, while a 1970s new wave vibe also lingers under the surface.

Another crucial element in the new sound is the fact that, for the first time, the band worked with a producer for the entire album. Although a number of tracks on the 2013 album Corsicana Lemonade were overseen by Wilco frontman Jeff Tweedy, a chance meeting with Ethan Johns (Ryan Adams, Kings of Leon, Laura Marling) at the End of the Road festival led to them working together at his studio in North Carolina.

Johns’s production process meant stripping away a lot of the fluff and frills, although they managed to retain some of the “crazy, snaky guitar lines and time-signature jumps” that have become their trademark. “His process is really old-school; he tracks live on 16-track tape, and he was very much about just wanting to capture the sound of the band, primarily, so there was not a lot of frills, not a lot of overdubs and things like that,” says Petralli.

Johns’s methods, coupled with the band’s new approach, also made it easier to capture the live energy that White Denim have become renowned for.

“I think this is kind of the closest we’ve come,” Petralli agrees. “It’s tough. You think that bands good at playing together just set up microphones and make a live-sounding record, but the studio always has a way of dictating your process.

“So this was the first one that we practised all the songs as if we were gonna get on stage, then we just kinda knocked it out. I think that next time we’ll practise even more, because that’s really the key. It sounds so dumb, saying it, but it really is – rehearsal and actually playing live is how you make a live-sounding record.”

Things are ticking along nicely for White Denim, and he has no plans to reprise Bop English any time soon, Petralli says. “That record really took it out of me. It was actually 18 songs long, so I released 10 of them, and the other half of the record, essentially, is waiting. I couldn’t convince anybody to put out the double album that I really wanted to release,” he laughs.

“I made two White Denim records in the time that it took to do that Bop English record. The first recordings were done in 2009. I’d love to make another record that way eventually, but for the time being, I really like chasing this White Denim thing.”

What does that mean for his band’s future? With so many changes within their ranks over the past year, have the goalposts shifted in terms of ambitions? “Ummm, that’s a good question,” he says. “There is a part of me that’s like ‘Man, could I actually play an arena?’ There’s something kind of intriguing about that world, because I see bands that are at that level and I think ‘Well, what’s so special about them? I think I should do that,’ ” he says.

“But at the same time, I don’t have a really sincere ambition for that, so it’s kind of just like a little bit of a game. I feel like so much of that ‘next step’ has to do with creative compromise that I won’t make, so if it does happen, it’ll be this really weird fluke. So I think that I’m just gonna keep trying to make solid records; records that I feel like I can stand behind.”