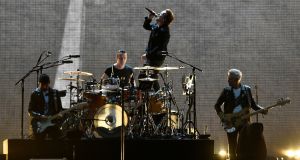 U2 perform at Croke Park, Dublin in 2017. Photograph: Clodagh Kilcoyne/Reuters 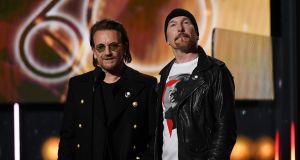 Tickets for the four U2 concerts in Dublin and one Belfast show sold out on Friday morning.

However, a second show has been announced for Belfast on October 28th with tickets going on sale on February 9th.

Live Nation and MCD have confirmed this will be the final added concert in Ireland .

The shows are part of the European leg of their eXPERIENCE + iNNOCENCE 2018 tour this October and November.

They will now play two shows at Belfast’s SSE Arena on October 27th and 28th.

Many fans took to social media to complain about the problems buying the tickets on the Ticketmaster site with technical errors popping up.

A nubmer of people noticed not long after tickets were sold out they appeared on resale websites at much higher costs.

Prices on Ticketmaster for the official sale started at about €40.50 for stand and seated tickets to more than €200.

It is understood standard tickets sold out shortly after going on sale at 9am.

Two U2 tickets appeared on eBay selling at €1,500 for a silver VIP package at a Dublin show.

He called for legislation to ban the above cost reselling of tickets to be enacted by the Government immediately.

“Today’s outrageous cornering of the market by touts whose only goal is to gouge hard-working fans is an absolute disgrace and shows clearly the problem we have here,” he said.

“If the companies charged with selling tickets wanted to stamp out this practice, they could easily have done so.”

“This situation cannot continue: the ticketing industry cannot be relied upon to regulate itself.”

The band’s European tour starts in Berlin on August 31st.

The European dates follow the North American leg of the tour, which begins on May 2nd in Tulsa, Oklahoma.

The band last played in Ireland in 2017 in a sold out concert in Croke Park.

U2 - European dates announced so far:

For complete tour and ticket information, visit: www.U2.com and www.livenation.com