Roger Waters: Trump voters are not liking his latest Wall 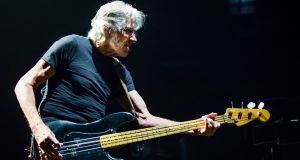 Roger Waters: has advised fans if they want a show devoid of political statements, they should “go see Katy Perry or watch the Kardashians instead”. Photograph: Scott Legato/Getty Images

At 75 years of age and with 50 years of touring experience behind him, Roger Waters is, for the first time in his stellar musical career, hearing his fans boo him loudly at his shows – with some even walking out in protest.

These displays of dissent are in no way due to fans feeling short-changed by Waters’s current Us + Them tour, or his musicianship, vocal delivery or setlist selection. It’s the political content of the show that is causing problems in certain parts of North America, where Us +Them is currently touring.

The show, named after a Pink Floyd song and very much a greatest hits affair, has been drawing superlative reviews in the US; it travels to Europe next year with a Dublin date in the 3Arena confirmed for June 26th.

During the show, giant images of Donald Trump, which depict the US president with lipstick, breasts and wearing a Ku Klux Klan hood, are beamed up on a giant screen: a selection of the most offensive Donald Trump quotes about, for example, Mexico and women are then screened followed by the words “F**k Trump”.

Unsurprisingly, the walk-outs from the show occurred in those US states that had voted Republican in the presidential election last year. In interviews, Waters has expressed surprise at the negative reaction, saying, “I find it slightly surprising that anybody could have been listening to my songs for 50 years without understanding.”

He went on to advise potential ticket-buyers of the show that if they wanted to go to a music concert devoid of political statements they should “go see Katy Perry or watch the Kardashians instead”.

The blunt political messages contained in the show have cost him financially: American Express pulled $4 million in sponsorship from the tour due to the imagery issue.

The second political dimension is that some Jewish groups in the US have publicly condemned the shows. Waters is a prominent spokesperson for the Boycott, Divestment and Sanctions (BDS) movement, which is a campaign to increase economic pressure on Israel to end what it describes as the country’s apartheid-style treatment of Palestinians.

Waters is a curious character. Despite having the highest-grossing tour by any solo artist in the history of music (for his tour of The Wall album four years ago) few people would recognise him in the street. He eschews the celebrity lifestyle, and is known as a passionate and intense person, someone who even his own friends will describe as being “difficult”.

He was a co-founder of the groundbreaking and era-defining Pink Floyd back in 1965. He was originally the quiet bass player of the band but, following the departure of singer and guitarist Syd Barrett, he became the group’s lead vocalist and its creative lynchpin.

Waters was the undisputed controller of the Pink Floyd sound. He wrote most of the music and lyrics for Dark Side of The Moon and Wish You Were Here.

But a clear division opened up in the 1970s between Waters and guitarist David Gilmour, drummer Nick Mason and keyboardist Richard Wright. Waters felt the other three members didn’t contribute enough musically while Gilmour, Mason and Wright felt Waters was overly domineering.

Waters walked away from the band in 1985. He took legal action so that only he (as chief songwriter) could use the Pink Floyd name but he lost the case and Gilmour, Mason and Wright continued as Pink Floyd, releasing a number of albums of varying quality.

The two camps spent the next 20-odd years sniping at each other through the press and negatively reviewing each other’s work, before briefly reuniting to play the Live 8 charity concert in London in 2005. Although offered huge sums of money to tour again as a four-piece, they declined.

The animosity cooled over the years, and Dave Gilmour appeared on stage with Waters to play Comfortably Numb, when the Wall tour came to London’s O2 arena in 2011. Keyboardist Richard Wright died in 2008, and there is still tension between Waters and Gilmour and Mason, so even a three-piece reunion seems highly unlikely. As Waters has said of the troubled relationship: “I don’t think any of us come out of the years from 1985 onwards with any credit.”

The reaction by some to Water’s current tour shouldn’t come as a surprise. His songs always contained a political dimension, whether nuanced or provocative in nature. Back in 1983, he wrote what many consider his finest piece of work in The Fletcher Memorial Home: a scathing description of world political leaders that painted them as “overgrown infants”, “incurable tyrants” and “colonial wasters of life and limb”.

With little fanfare, Waters released his first album in 25 years last June along similar political themes to his Pink Floyd work. Fifty years into his career, Waters knows that few people coming to see him play in the 3Arena next year will want to hear the new album (although he does play a few songs from it). They are there to hear his work from a remarkable six-year creative streak, beginning with 1973’s The Dark Side of The Moon and ending with 1979’s The Wall (with the Wish You Were Here and Animals albums sandwiched in between).

Us + Them is the most directly political live music show in years. With other musicians floundering somewhat in how to react to the current political climate, Roger Waters is in the express lane, calling it as he sees it. But then, he’s been singing about “overgrown infants” and “incurable tyrants” for the last four decades.