The Nightingale and the Rose review: An opera that rescues Oscar Wilde from whimsy 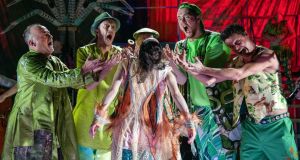 The Nightingale and the Rose: Kim Sheehan as Nightingale with the rest of the opera’s cast. Photograph: Jed Niezgoda

THE NIGHTINGALE AND THE ROSE

The Everyman, Cork
★ ★ ★ ★ ★
The technical virtuosity enlivening this world premiere of John O’Brien’s operatic version of the Oscar Wilde story is such that it is no surprise when the entire production crew joins the cast for what would be a curtain call if there were a curtain.

The case could be made that the audience should be up there also; in a disarming introduction, O’Brien himself conducts the patrons in a rehearsal of a theme to be sung at two critical points. Of course O’Brien, the composer, director and, with Éadaoin O’Donoghue, writer of the opera, knows his choral kin: the house has his back, and the response is in tune, in time and in sympathy with the musical demands of the score.

These are considerable, written as intricate variations for nine instrumentalists doubling as a group of appropriate Muses and in some cases as the wild creatures of the nightingale’s environment. This develops as an orchestrated commentary on a romantic little bird’s decision to give her life’s blood so that a lover can find a red rose for a girl who doesn’t deserve it. Overseeing this piteous declaration of faith in the power of human love are Majella Cullagh’s Moon and Owen Gilhooly’s Sun, in aloof counterpoint to the soaring thrills of Kim Sheehan’s Nightingale.

Precise in every detail of performance, the production glows with a rich inventiveness of colour, surprise and allusion, even to a hint of Gilbert and Sullivan animating the five-man rose-tree ensemble. Yet the insight with which O’Brien and O’Donoghue rescue Wilde from whimsy and reveal instead a passionate questioning of his society’s values remains compelling. For all its unique beauty of design (Lisa Zagone), lighting (Sinéad McKenna) and choreography (Philip Connaughton) this is a story of bitter sacrifice. Nonetheless, the departing patrons are humming the aria they have sung themselves, like a gift.