Swift, who won a record fourth artist of the year, urged people to 'get out and vote' 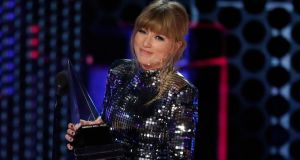 Taylor Swift, straight off a controversial dive into US politics, was the big winner at the American Music Awards in Los Angles on Tuesday where she used her platform to again urge her fans to get out and vote.

The 28-year-old pop singer won a record fourth artist of the year trophy at the fan-voted American Music Awards, beating rappers Drake and Post Malone, as well as Britain’s Ed Sheeran and rock band Imagine Dragons for the top prize.

She also picked up three other awards, for best female pop artist, best tour, and best pop album for Reputation, the biggest seller of 2017.

On Sunday, Swift provoked a storm by breaking her silence on politics and announcing she would vote for two Democrats in Tennessee in the US congressional midterm elections in November. Her comments drove a spike in voter registration.

New York rapper Cardi B brought down the house with an exuberant performance of dance hit I Like It with J.Balvin and Bad Bunny. Cardi B, who has had a breakout 12 months, was also named favourite hip-hop/rap artist, but she lost the best new artist category to Cuban-born Camila Cabello.

Some of music’s top stars, including Drake, Ed Sheeran, Beyoncé, Ariana Grande, Rihanna and Kanye West, were absent on Tuesday. West was snubbed in the nominations while Beyoncé, Rihanna and Grande got just one nomination each.

Apart from Swift, the show was largely politics free.

Host Tracee Ellis Ross sported a white T-shirt for part of the evening saying “I am a voter,” and presenter Billy Eichner, best known for the TV comedy Parks and Recreation,” urged the youth audience to register to vote.

“You can go to vote.org, like Taylor Swift told you to,” Eichner said.

Rapper XXXTentacion was honoured with a posthumous gong. The rapper, who was gunned down in Florida in June aged 20, was recognised for his album 17. It won favourite record in the soul/R&B category, seeing off competition from Khalid and SZA. XXXTentacion’s mother, Cleopatra, accepted the prize on stage. Fighting back tears, she said: “I am honoured. On behalf of my son, I would like to thank the AMAs, his fans and everyone who made this possible. Thanks guys, I appreciate it.” XXXTentacion, whose real name was Jahseh Onfroy, was fatally shot as he left a motorcycle dealership in South Florida in June. Officials said a struggle ensued when the rapper’s sports car was blocked by another vehicle, two masked gunmen approached and shot XXXTentacion multiple times. Four men are accused of his death. XXXTentacion is one of three high-profile rappers to die this year, alongside Lil Peep and Mac Miller.

Gladys Knight led an emotional tribute to the “Queen of Soul” Aretha Franklin who died aged 76 in August following a battle with cancer. Knight, herself considered a giant of soul music, was joined on stage by Ledisi, Mary Mary, Donnie McClurkin and CeCe Winans for a medley of gospel-style songs, including Amazing Grace. Knight, who performed You’ll Never Walk Alone at Franklin’s funeral, said: “It’s a blessing to be a part of this moving musical tribute to honour our late queen and sister, Aretha. “She was an icon and visionary, radiated light and love through all of her life’s work, and touched all of us through her incredible gift of music.” As Knight finished her song, McClurkin entered with Climbing Higher Mountains before Winans led the audience with the hymn Mary Don’t You Weep (Pharaoh’s Army). By the time Ledisi was performing How I Got Over, many members of the audience were in the aisles dancing. Bringing the evening to a close, host Tracee Ellis Ross said: “We love you, Aretha.”

Bad Boys for Life review: The funny bits are funny. The serious bits are even funnier
8

Ingenious Ireland: A cornucopia of a book that should be savoured slowly
9