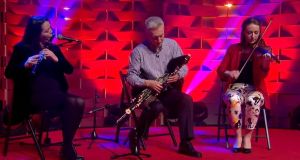 The sense of a conversation resumed infuses the new album from pipers and flute players Mick O’Brien and Emer Mayock and fiddle player Aoife Ní Bhriain. Eight years after they first mined the manuscripts of Canon Goodman, a 19th century clergyman from Kerry, they’re returned to the source. And this time around their excavations have yielded further glistening gems.

Dingle native, James Goodman was a Church of Ireland canon and a professor of Irish in Trinity College Dublin. He collected some 2,300 mainly traditional tunes in the 1860s, which lay unpublished in the Trinity library until Hugh Shields did musicians and listeners an immense service in 1998 by editing them into two volumes: Tunes of the Munster Pipers.

Goodman himself was a respected piper, gaeilgeoir and singer;  160 years later musicians are still exploring his collection with the sense of adventure that Columbus must have had when he set sail for worlds unknown.

More Tunes from The Goodman Manuscripts sees O’Brien, Mayock and Ní Bhriain revel in their deeper acquaintance - with the tunes and one another. Joyously freewheeling yet meticulous in their arrangements, it’s evident that these musicians have found their own particular vernacular that both serves the music and unfetters it from the confines of the manuscript.

Where the first album focused on pipes, flute and fiddle, this collection sees the addition of concertina and viola from Aoife, with a resulting musical palette that’s full of light and shade, and an impish sense of adventure.

The trio originally came together at the request of renowned piper Peter Browne. And that was what Lou Reed might call ‘the beginning of a great adventure’.

“From the very beginning we enjoyed playing together,” O’Brien recalls. “The way we thought about the music was what cemented us together. We could experiment, but we could also play straight down the line and sound really good.”

For Ní Bhriain, it was an exchange that felt effortless from the very beginning.

“Playing music with people is like having a conversation, and sometimes the conversation flows naturally and sometimes you’re left wondering what to say next,” she muses. “Between the three of us it flowed naturally because we were very invested in what that music was, and what it was about. Of course we all had very different interpretations of what the music meant to us and why, but when we played it together, it was a very easy conversation to have.

“Here we were, taking music from a manuscript, which is not what we usually do in the tradition, and I think that was the most extraordinary thing: that we could do that and there was no stopping and talking about it. So we learned the music of Goodman from the page and turned it into our own colloquial language and it just came alive then.”

O’Brien and  Ní Bhriain are father and daughter from Dublin, both steeped in the tradition. Mayo piper and flute player Mayock was intimately acquainted with the music of the O’Briens, having been reared on the tunes of Mick’s brother Donncha Ó Briain and his record, Irish Traditional Music on Tin Whistle.

“The first time we played together it was really obvious to me that there was something really special about the way we worked together,” says. “And of course we had Goodman’s manuscript: it creates this focus, so you just go back to the font. I really appreciate the privilege of walking into an already formed musical relationship between Aoife and Mick and also their own relationship between themselves, which is really good to be around.”

We knew that it was absolutely fine to take some poetic licence with what Goodman might have called a reel or a polka or a hornpipe, and that it wasn’t necessarily so

This second collection is a repository of enormous beauty and depth as it turns its attention to some of the more unusual Goodman tunes, and revels in their diversity. Every note and ornamentation is precisely judged, from the joyous interweaving of whistles, fiddle and pipes on the opening reel set (Johnny Is Gone to France) to the spaciousness of the slow air (Ceann Dubh Díleas), where flute and drones are the wayfinders that lead the melody line, with Ní Bhriain’s fiddle tiptoeing into the path along the way. All  is evidence of a recording long in gestation, with each musician bringing a wealth of riches to their interpretations.

“We knew that it was absolutely fine to take some poetic licence with what Goodman might have called a reel or a polka or a hornpipe, and that it wasn’t necessarily so,” Ní Bhriain says, adding that many tunes were clearly more “pipe friendly” than “strings friendly”. “We just played it in whatever way felt right for the character of the tune.

“There were times when you would see something on a page, and you’d think: if Mozart and Schubert could make mistakes in their manuscripts, then it’s possible that Goodman could also have made some mistakes along the way. When a musician looks for a mistake, it might be an improvement, a variation or an improvisation. It’s trusting your instinct: having been brought up in the tradition from such a young age, you have to trust your instinctive interpretation of your own language to get the best out of some of the tunes.”

There’s an internationalism threaded through the Goodman collection, with Galician, Polish and Breton influences tangible in the tunes.

Ní Bhriain: “We discovered that there was a roaring wine trade between Spain, Portugal and France into the south coast of Ireland, and it’s possible that tunes were exchanged, and it’s very likely that Goodman got tunes from travelling musicians too. He may have hosted them for dinner and got a tune in return. That would not have been unusual at the time, particularly given his place in society.”

More tunes from the Goodman manuscripts are available on custysmusic.com. Digital download is at goodmantunestrio.bandcamp.com.