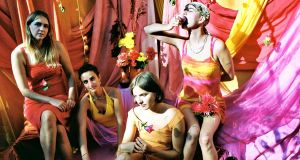 Goat Girl: All-male groups ‘are going to see the world quite differently to a band with a non-binary person and three women’

Over the summer, as Black Lives Matters protests swept the world, Goat Girl’s Lottie Pendlebury decided something had to be done about Winston Churchill. “We were planning to try and ‘get’ Churchill – me and a few housemates,” says the singer and guitarist, as her critically lauded indie band prepare to release their extraordinary second album, On All Fours. “It’s mad that he’s an untouched statue in Parliament Square.”

Ivor Roberts-Jones’ bronze cast of Churchill had been daubed with slogans during the wave of demonstrations in early June that elsewhere saw the statue of slave trader Edward Colston dumped in Bristol Harbour. But Pendlebury and her friends believed the ante needed to be upped further in order to call attention to the imperialist legacy of Britain’s wartime leader.

“Someone graffitied him [during Black Lives Matter] but he should not be there. He should be taken down,” she says.

She and her flatmates didn’t get around to toppling Churchill. Any such heist might have been a tall order in any event. After repeated attacks, the statue, which has stood in Westminster since 1973, was temporarily encased in a protective covering. However, it is still on their “to do” list.

“He’s called communities from other countries savages,” she says. “He’s f***ing racist. He needs to go.”

What about the argument that removing statues erases history? “We’re not trying to pretend none of this ever happened. It’s about just not giving it this platform of power over us.”

Over Zoom, the 23-year-old is softly spoken. Yet there are glints of steeliness too. That same tensile quality runs through On All Fours. Intense and cathartic, the record feels in some ways like an aural manifestation of the times we are living through.

The effect is disorienting and rather thrilling. Single Sad Cowboy, for example, is buffeted by a growling bassline, caterwauling guitars and sprinklings of house piano. Over this, Pendlebury deadpans her way through lyrics such as “People pass, we exchange a glance/ As the dogs do laugh in a background chant”. It’s otherworldly and hypnotic – David Lynch meets PJ Harvey.

Given how pertinent it all sounds, it’s therefore surprising to discover that On All Fours was recorded in the far off neverland of 2019. The plan was for it to come out last year. But then life got in the way.

“There was a delay because I got cancer and had to be treated for that,” says guitarist and vocalist Ellie Rose Davies. “I’m all good now, thank f***. It’s a shit thing.”

Goat Girl know all about surfing pop’s choppy waters. They were required to negotiate an early squall of hype when, with just one single under their belt, they signed to prestigious London indie label Rough Trade in 2016 (they put their signatures on the dotted line on June 24th, the day the Brexit referendum result was announced). The tune in question, Country Sleaze, was trending on Twitter even before its release.

They more than lived up to the pressure with their self-titled first album in 2018. Goat Girl was an apocalyptic blend of blues, rock and industrial music. Even more memorable than the textured alt-rock were the lyrics: Burn the Stake, for instance, featured the striking coda “Build a bonfire, put the Tories on the top/ Put the DUP in the middle and we’ll burn the f***ing lot”.

This was topped off with a laconic English quality that saw them briefly – and bafflingly – likened to The Libertines. And yet they were determined to chart their own course from the outset. For example, Goat Girl set up the obligatory band Facebook page only with great reluctance, and they go into the new launch campaign without a Twitter account.

“I think it’s a generational thing,” says Davies. “I don’t think any of us ever really ‘got’ Twitter. No one I know ever really uses it.”

One of the major positives of the summer’s protests in Britain, agree Pendlebury and drummer Rosy Jones, is that Britain has finally started the process of reckoning with its colonial legacy.

“Our history with Ireland, our history with all the colonising that we’ve done … We’re just not taught about it,” says Jones. “Lots of English people just don’t know it.”

Pendlebury says: “We’re taught about the British empire at school as this kind of victorious thing. None of the absolute violence and cruelty that basically led to that was mentioned at all. You’re brought up into thinking that empire is a good thing.”  “It’s definitely been very eye-opening with the Black Lives Matter movement for all of us just having to check our privilege as well. And to re-educate ourselves. Which is so important. Education is led by the government. They’re not going to be including things that need to be told to people. They want to kind of uneducate us and unskill us almost.”

Goat Girl began when childhood friends Davies and Redina-Bock, then aged 15, met Pendlebury at a party. All three were from south London; Davies and Redina-Bock attended Haberdashers’ school in New Cross; Pendlebury went to the private “independent day school” Sydenham High near Crystal Palace. Jones, whose father runs a record store in Twickenham, was the final piece in the puzzle.

With three female and one non-binary member, Goat Girl are regarded in some quarters as inherently political – as if anything other than four blokes on stage adds up to some kind of grand statement. Representation is important, they say. But they would hope that there is a bigger picture too.

“I’m non-binary,” says Jones. “If you’re from an oppressed group you can never not be that. People always see that. Sometimes that’s a good thing. It does play a big part in the art we make. But you can never be, like, just a musician.”

A point Goat Girl are eager to get across is that their music isn’t simply about bashing Boris Johnson or Winston Churchill.

“People get confused with politics a lot of the time,” says Pendlebury. “They think to be political is to be like ‘f*** the Tories’. Which obviously we do think. But politics is basically like addressing your position and privilege in society. And how you are in the place you are. How people are in the place around you. It’s down to political power structures. Talking about the everyday is political in my eyes.”

Lockdown has wreaked havoc with their careers. Goat Girl used to be a full-time occupation. But with touring impossible, they’ve had to take up regular jobs.

“It’s massively changed our lives,” says Davies. “We were quite a ‘touring’ band. That’s how we would make our money. We’d do lots of festivals. That was cancelled. We all have jobs now, which are our main source of income. Which wasn’t the case. We all miss touring for the financial side of it as well as getting out and seeing the world.”

“I’ve played gigs and gone to gigs my whole life,” says Mullineaux. “It was at the point where I was almost jaded with it. ‘I don’t want to go to another festival, I can’t be **sed’. I just want to stay at home’.

“This year has definitely given me a new-found appreciation. It’s been a massive part of my social life. It’s been my job. It’s got to the point where I’ve even started missing airports.”

On All Fours was recorded by Dan Carey, who also produced Fontaines DC’s two albums, including this year’s Grammy-nominated A Hero’s Death. Do Goat Girl feel an affinity with the Dubliners and with other young guitar groups such as Shame?

“In some ways yes, because they are of our age group and maybe have similar feelings as us about the world,” says Davies. “In other ways no. Because they’re men. They are going to see the world quite differently to a band with a non-binary person and three women. So that’s quite a big way that our music would be different.”

One major contrast is that, unlike several of their male indie peers, Goat Girl aren’t given to taking childish pot shots at other musicians. Eyes are rolled when they are asked about the ongoing slanging match between, in one corner, Sleaford Mods and Fat White Family (an early inspiration for Goat Girl) and, in the other, Idles.

“Swinging their willies around” is how Mullineaux characterises the “feud”. “We’ve got better things to do than do that. That sounds mean. [But] no good’s going to come of it. It just seems a bit pointless.”

On All Fours is released on January 29th