Gig of the Week: Kiasmos at Vicar Street 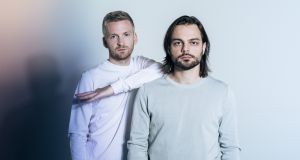 Kiasmos: Vicar Street, Dublin, November 5th
I’ve had truly transcendent times watching Ólafur Arnalds and Janus Rasmussen’s inexpressibly gorgeous techno duo, Kiasmos, perform live before. And I’ve also bowed out of one of their DJ sets early when the magic just wasn’t there. The auguries are very promising for this appearance, though, hot on the heels of their sublime recent visit to Electric Picnic. As with Stradbally, it will be a live set, delivered side by side from their banks of sequencers, samplers and controllers.

That always sounds like a clinical set up, but the music of Kiasmos is much more sensuous, a layered and textured minimalism that bathes you in fluid sensations.

It’s almost too tempting to consider their musical ideas as the consequence of geography. Both come from islands – Rasmussen from the Faroe Islands and Arnalds from Iceland. The latter’s compatriot Bjork one sang of “emotional landscapes” which is a useful description of the tectonic beats and surging, subsiding details in the output of Kiasmos so far. A collection of just four EPs, and a gorgeous self-titled LP, its most recent addition is Blurred, released last month.

To anyone new to the pair, the title track of that release is as good a place to start as any. A piano picks out a cushioned, dreamy melody above a propulsive rhythm guided by the soft brush of shakers while a discreet bed of distant strings seems charmingly shy to assert itself.

The dominant tone is of tactility, though, which is unusual for electronica: a rasp becomes clear in the strings, abrasively human, before a swirl of something more treated envelopes the whole. At its simplest, it’s orchestral dance music.

That’s typical of the relationship between its creators. Arnalds is infuriatingly gifted at many things across various genres, from percussion (he was the drummer in a metal band) and capacious musicianship (he can play almost anything) to producing. But he gained wider recognition as a composer of note, working on solo albums and soundtracks, even winning a Bafta. Rasmussen is a bigger deal in Iceland, as keyboard player and vocalist of the band Bloodgroup.

Their dynamic is undeniably cerebral – even the name is a play on “chiasmus”, a rhetorical device built around inversion and co-operation – but the results are always warmly felt. On the EPs Thrown or Looped there seems to be no ideas they can’t combine into something simultaneously precise and lush, swooping and swooning. Fans of Jon Hopkins and Bonobo will already know the feeling; that grace and edge are not irreconcilable, that whatever its source or combinations, music is always meant to exhilarate and move.