The colours of music: this week’s classical music highlights 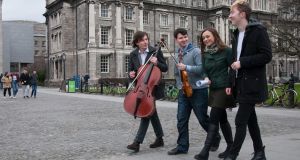 Music and the Senses
NCH John Field Room, Dublin Friday September 1st 1.05pm €15 nch.ie
The Téada Trio – Tim Doyle (violin), Matt Rafter (cello), and Svetlana Rudenko (piano) – present music by Granados, Tchaikovsky and Scriabin and a new work by group member Doyle. The musicians are interested in that well-known but little understood phenomenon, synaesthesia, through which the stimulation of one sense is also spontaneously and simultaneously perceived by another. Composers who experienced music as colour as well as sound included Scriabin and Messiaen. Téada can’t make you a synaesthete if you’re not one already. So what they offer in tandem with their musical performances is “displays of visual art to stir the imagination”.

The National Concert Hall’s training orchestra is in action again. SinfoNua, which was established in 2015, is not a regular youth orchestra. It’s targeted at students in the final years of undergraduate study, post-graduate students, and recent graduates. The intention is to provide “an experience mirroring that of a professional orchestra”. This year’s programme includes Stravinsky’s Symphony in Three Movements, Rachmaninov’s Symphonic Dances and Sibelius’s Violin Concerto, with Mia Cooper, leader of the RTÉ Concert Orchestra, as soloist. The ubiquitous David Brophy conducts and the programme will be heard in Cork as well as Dublin.

Our Lady’s Choral Society, RTÉCO/Proinnsías ó Duinn NCH, Dublin Sunday September 3rd 3pm €22.50, €25 nch.ie Our Lady’s Choral Society is offering a chalk-and-cheese pairing of two 19th-century choral works by composers more famous for their achievements in other areas of the repertoire. Rossini was an opera composer and his Stabat Mater has been pilloried for the perceived lack of connection between the music and the sacred text, a problem that did not prevent the public from taking the work to its heart. Franz Liszt, the most celebrated of virtuoso pianists, was tonsured and admitted to holy orders in 1865. Two years later he wrote the mass for the coronation of Franz Joseph as king of Hungary in a pared-back style that was meant to make the work easy to sight-read. The soloists with the choir and the RTÉ Concert Orchestra under Proinnsías ó Duinn are Sinéad Campbell-Wallace, Mihaela Loredana Chirvase, Andrew Gavin and Robert McAllister.