A Tribe Called Quest: one of hip hop's greatest ever journeys

Their Electric Picnic show will almost certainly be their last on Irish soil. Here's their extraordinary story, from the Queens early days to leaders of the resistance 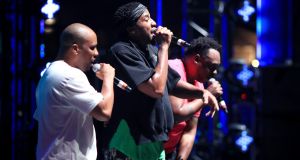 Consequence, Q-Tip and Jarobi White of A Tribe Called Quest on stage this year. Photograph: by Christopher Polk/Getty Images for FYF

“Everybody stand up, one fist in the air,” the A Tribe Called Quest rapper instructs. With a black fedora for a crown and comrade Jarobi on his flank, Q-Tip’s words act as a rallying call of defiance and sermon. “We are all one. We are the people.”

With that, Tribe’s DJ Ali Shaheed Muhammad spins the celestial keyboard loop and jack-knifing drumbeat of We the People… The group’s first single since Bill Clinton was in the White House shuffles the issues plaguing the US like cards in a deck: police brutality, racial prejudice, religious discrimination, homophobia and gender inequality. They didn’t know it at the time, but Tribe were soundtracking what became known as The Resistance: a first line of defence against Trump’s corrosive agenda.

Watching the trio perform new music together feels like a minor miracle. The break-up of Tribe almost two decades ago followed a familiar framework: a beloved collective fracturing under the weight of internal arguments and bad business.

There had been occasional live reunions, but all hope of a new record seemed to evaporate when the MC, Phife Dawg – for many the group’s beating heart – died in March last year, due to complications relating to diabetes, a disorder he lived with for more than half his life.

Then suddenly, a gift appeared. During his final months, Phife had been holed up at Q-Tip’s New Jersey home, secretly recording an album that would become We Got It from Here... Thank You 4 Your Service. Released the day before the Saturday Night Live performance – which Phife appeared in via a recorded verse and large mural – it’s a scintillating rap record that deletes 18 Tribe-less years by sounding fresh, relevant and vital.

Hip-hop started as a youth culture and has always been a young person’s game. But as rap gets older, we’re discovering how good this music recorded by now-middle-aged stars can be. We Got It from Here... sets a new standard. It’s the perfect final act, an album enhanced by the wisdom of age while still sounding distinctly Tribal.

How do the great music groups find each other? The odds of compatible geniuses meeting on this planet seem so remote. Yet A Tribe Called Quest – who headline Saturday at Electric Picnic – came together in Queens, New York, where Q-Tip first met Phife when they were around two years old. By their mid-teens, the pair were rapping together. Tip’s smooth yet studious flow complementing Phife’s streetwise, Trinidadian-infused swagger.

Ali Shaheed Muhammad, “the sound provider”, was a gifted man behind the music, working alongside Tip on the beats. And Jarobi, well, you never quite knew what Jarobi was doing. Tribe’s man of mystery contributed ideas but skipped out on the group to attend culinary school after the release of their first album. Still, a revolving door policy allowed him to jump back in whenever the stars aligned.

Tribe made socially engaged songs cut with abstract philosophy and doused in Afrocentric flavours. Lyrically they were expressive, imaginative and deep-thinking. Hits such as Check the Rhyme, Bonita Applebum and Electric Relaxation are loose, funky and soulful. Head-nodding hip-hop drum breaks underpin chopped-up samples stacked on samples: Tribe’s sonic approach was as playful as mixing ice cream with M&Ms with jelly babies.

Matching the rubbery bass line from Lou Reed’s Walk on the Wild Side with a boom-bap beat and slick record scratches on Can I Kick It? seems like the easiest thing in the world. But nobody else could have made the concoction sound quite so blissful.

The group split in 1998 after five albums. Tip and Phife’s relationship was left with deep lacerations, the long-standing strain captured in the 2011 documentary Beats, Rhymes & Life: The Travels of A Tribe Called Quest. Michael Rapaport’s film tries to end on a positive, with footage of one of their sporadic reunion shows in Japan. But there’s little sense the tensions pulsing underneath Tribe had been relieved.

Muhammad’s post-group work included a stint in the excellent supergroup Lucy Pearl. Phife put out his own solo record Ventilation: Da LP in 2000. During an era of hip-hop megastars, Q-Tip dropped songs such as Breathe and Stop and Vibrant Thing, which you probably still hear going off in the club. Tip later embarked on a period outside music where he practised celibacy and buried himself in books.

But life often closes off incomplete circles. Call Tribe’s on-wax reunion fate if you want to be trite. Call it a fluke of timing. Or maybe the album was inevitable. Whatever you believe, a performance on the Tonight Show Starring Jimmy Fallon in 2015 to mark the 25th anniversary of their debut LP, People’s Instinctive Travels and the Paths of Rhythm, served as the catalyst. According to a New York Times profile from last year, Phife had been trying to get Tip back in the studio for years. Finally, the moment felt right.

High-profile hip-hop collaborations can sometimes suffer a lack of chemistry, which is little wonder when verses are often recorded in different countries beamed on to a producer’s hard drive. On We Got It from Here..., Tip insisted everyone work under the same roof.

Long-time collaborators Busta Rhymes and Consequence feature throughout, with Kendrick Lamar, André 3000 and Anderson Paak among the guests. The rappers frequently play a game of “the microphone is lava”, each trying not to hog the spotlight for too long before passing the mic on.

Muhammad’s name is nowhere on the album credits, as he was working as the music supervisor for Netflix’s Luke Cage during recording. And so most of the musical tinkering fell to Q-Tip. The production is rich, warm and thumping. with peppy organ chords, howling guitars, thick bass lines and lots of white-hot percussion. With Dr Dre, RZA and Kanye West, Tip is among the great rapping producers of all time, looking up at precisely nobody.

Tribe’s agenda on We Got It from Here... was far from single-minded, working in everything on the evil of inflated self-importance (Ego) to the rappers who’ve followed the path they forged (Dis Generation). They do, though, capture the ugly forces that helped power president Donald Trump’s ascent.

Some, including Jarobi, believe that it was the recording of We Got It from Here... Thank You 4 Your Service that killed Phife; that the workload plus travelling back and forth from his California home eventually ground him down. That he died creating new art, with his relationship with Q-Tip at ease, has something of a ring of beauty to it. The result of Phife Dawg’s labour is an album that’s grandiose, groovy, grief-stricken and one of the decade’s finest.

When Q-Tip, Muhammad and Jarobi take to Electric Picnic’s Main Stage, it’s likely to be one of the last stops in the instinctive travels of A Tribe Called Quest. The closing paragraphs in a chronicle among the most treasured in rap doctrine. Cherish it. Take it all in. You won’t see anything like this group ever again.

Marita Conlon-McKenna: ‘I didn’t think I would write another Famine novel’
7